Last updated April 15, 2020
This article is about the history of science journal published in Chicago. For the student publication at the University of Oxford, see The Isis Magazine.
Academic journal

The journal was established by George Sarton and the first issue appeared in March 1913. [1] [2] Contributions were originally in any of four European languages (English, French, German, and Italian), but since the 1920s, only English has been used. [3] [4] Publication is partly supported by an endowment from the Dibner Fund. Two associated publications are Osiris (established 1936 by Sarton) and the Isis Current Bibliography.

The publication of the journal was interrupted in 1914 by the German invasion of Belgium during World War I, and resumed in 1919. During World War II, publication was interrupted again in 1940 and in 1945. Since then, each year four issues (sometimes double issues) of one volume have appeared in print, and since 2002 the journal has also been published in full-text electronic format.

In 1924, the History of Science Society [8] was founded by George Sarton and Lawrence Joseph Henderson to secure the future of Isis. [9]

In a paper Why Isis, Sarton explains that the choice of the name for his journal was made rather unconsciously, after having been introduced to Egyptology during a visit to the Egyptian section of the Rijksmuseum van Oudheden in The Netherlands. [10] In his paper, Sarton elaborates on the misunderstandings the name Isis can generate: in the early years, Isis was often linked to freemasonry, because some of their rites are purportedly of Egyptian origin. Another misinterpretation was that Isis referred to theosophy, most likely caused by the book entitled Isis Unveiled (1877) by Helena Blavatsky, who was the leader of the theosophic movement at that time. Also, and very reasonably, Isis was taken to be a journal devoted to Egyptology.

The following persons are or have been editors-in-chief:

According to the Journal Citation Reports , the journal has a 2017 impact factor of 1.070, ranking it 11th out of 61 journals in the category "History and Philosophy of Science" (Science edition). [18] 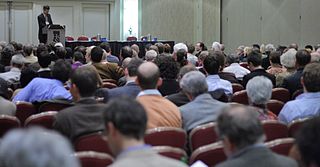 The History of Science Society (HSS) is the primary professional society for the academic study of the history of science. It was founded in 1924 by George Sarton and Lawrence Joseph Henderson, primarily to support the publication of Isis, a journal of the history of science Sarton had started in 1912. The society has over 3,000 members worldwide. It continues to publish the quarterly journal Isis, the yearly Osiris, sponsors the IsisCB: History of Science Index, and holds an annual conference.

Foundations of Physics is a monthly journal "devoted to the conceptual bases and fundamental theories of modern physics and cosmology, emphasizing the logical, methodological, and philosophical premises of modern physical theories and procedures". The journal publishes results and observations based on fundamental questions from all fields of physics, including: quantum mechanics, quantum field theory, special relativity, general relativity, string theory, M-theory, cosmology, thermodynamics, statistical physics, and quantum gravity

Complex Systems is a quarterly peer-reviewed open access scientific journal covering subjects ranging across a number of scientific and engineering fields, including computational biology, computer science, mathematics, and physics. It was established in 1987 with Stephen Wolfram as founding editor-in-chief. The journal is published by Complex Systems Publications.

Astrophysics and Space Science is a bimonthly peer-reviewed scientific journal covering astronomy, astrophysics, and space science and astrophysical aspects of astrobiology. It was established in 1968 and is published by Springer Science+Business Media. The editor-in-chief is Michael A. Dopita.

Inverse Problems is a peer-reviewed, broad-based interdisciplinary journal for pure and applied mathematicians and physicists produced by IOP Publishing. It combines theoretical, experimental and mathematical papers on inverse problems with numerical and practical approaches to their solution. The journal has a specialized relevance to workers in geophysics, optics, radar, acoustics, communication theory, signal processing and medical imaging.

Astronomy & Astrophysics is a peer-reviewed scientific journal covering theoretical, observational, and instrumental astronomy and astrophysics. It is one of the premier journals for astronomy in the world. The journal is published by EDP Sciences every month. The editor-in-chief is Thierry Forveille. Previous editors in chief include Claude Bertout, James Lequeux, Michael Grewing, Catherine Cesarsky and George Contopoulos.

The International Journal of Foundations of Computer Science is a computer science journal published by World Scientific. It was founded in 1990, covering the field of theoretical computer science, from algebraic theory and algorithms, to quantum computing and wireless networks. Since 1997, the Editor-in-Chief has been Oscar Ibarra of the Department of Computer Science, University of California.

The Scientific World Journal is a peer-reviewed scientific journal covering fields in the life sciences ranging from biomedicine to environmental sciences. It was established in 2001 and is published by Hindawi Publishing Corporation. The journal was delisted in the 2015 Journal Citation Reports because of "anomalous citation patterns".

Advances in Complex Systems (ACS) is a peer-reviewed journal published quarterly by World Scientific providing a multidisciplinary perspective to the study of complex systems. The journal was founded in 1997 and aims to "promote cross-fertilization of ideas among all the scientific disciplines having to deal with their own complex systems".

The International Journal of Algebra and Computation is published by World Scientific, and contains articles on general mathematics, as well as:

The International Journal of Computational Geometry and Applications (IJCGA) is a bimonthly journal published since 1991, by World Scientific. It covers the application of computational geometry in design and analysis of algorithms, focusing on problems arising in various fields of science and engineering such as computer-aided geometry design (CAGD), operations research, and others.

The International Journal of Modern Physics is a series of Physics journals published by World Scientific.

Complexity is a peer-reviewed open-access scientific journal covering the field of complex adaptive systems. The journal's scope includes Chaos theory, genetic algorithms, cellular automata, neural networks, evolutionary game theory, and econophysics. It was established in 1995 and is published by John Wiley & Sons, since 2017 in collaboration with Hindawi Publishing Corporation.

The International Journal of Applied Mathematics and Computer Science is a peer-reviewed quarterly scientific journal published since 1991 by the University of Zielona Góra in partnership with De Gruyter Poland and Lubuskie Scientific Society, under the auspices of the Committee on Automatic Control and Robotics of the Polish Academy of Sciences. The editor-in-chief is Józef Korbicz. The journal covers various fields related to control theory, applied mathematics, scientific computing, and computer science.