Kamaishi is located in the Kitakami Mountains of south-central Iwate Prefecture, with the Pacific Ocean to the east. The spectacular, rugged coast of Kamaishi is entirely within the Sanriku Fukkō National Park. There are four large bays, Ōtsuchi Bay in the north, Ryōishi Bay, Kamaishi Bay and Tōni Bay in the south. Each is separated by large, rocky, pine-covered peninsulas which jut out into the Pacific Ocean. Immediately the rocky cliffs develop into hills rising to 400 or 500 metres (1,300 or 1,600 ft) along the coast and 1,200 or 1,300 metres (3,900 or 4,300 ft) farther inland.

Kamaishi has a humid subtropical climate (Köppen Cfa) characterized by mild summers and cold winters. The average annual temperature in Kamaishi is 10.1 °C. The average annual rainfall is 1453 mm with September as the wettest month and February as the driest month. The temperatures are highest on average in August, at around 22.5 °C, and lowest in January, at around -0.8 °C. [3]

Per Japanese census data, [6] the population of Kamaishi peaked in around the year 1960 has declined steadily over the past 60 years.

The area of present-day Kamaishi was part of ancient Mutsu Province, and has been settled since at least the Jōmon period. The area was inhabited by the Emishi people, and came under the control of the Yamato dynasty during the early Heian period. During the Sengoku period, the area was dominated by various samurai clans before coming under the control of the Nambu clan during the Edo period, who ruled Morioka Domain under the Tokugawa shogunate. Before the discovery of magnetite in 1727, Kamaishi was little different from any of the other small fishing communities along the coast. However, it was not until 1857, and the construction of the first small blast furnace, that any real changes could be seen. In the 1850s, the feudal domains of Japan were engaged in an arms race to develop the first Western-style armaments, particularly large guns. The Nanbu Domain constructed blast furnaces of a foreign design in Kamaishi under the direction of military engineer Takatō Ōshima. Ten furnaces were built in all but some were owned by private corporations. The first of these furnaces was lit on December 1, 1857; a day honored as the start of modern iron production in Japan.

In the Meiji period establishment of the modern municipalities system, the town of Kamaishi was established within Minamihei District, Iwate on April 1, 1889. Minamihei and Nishihei Districts merged to form Kamihei District in 1896. Kamaishi attained city status on May 5, 1937, and expanded in 1955 with the absorption of the neighboring villages of Kasshi, Unosumai, Kurihashi from Kamihei District and the village of Tōni from Kesen District.

In 1875, the newly established Meiji government bought all of the furnaces and created the Kamaishi Iron Works. They also put Ōshima and a German engineer in charge of its modernization. The German director imported two large steam-driven blast furnaces of the latest design from Britain and set up a railway with 15 miles of track and a locomotive purchased from Manchester to deliver the ore. Production began in 1880 but had to be stopped soon after due to a lack of charcoal. An attempt to resume operations in 1882 by replacing charcoal with coke failed and the plant was closed.

There were cholera outbreaks in Kamaishi in July 1882 and April 1884. The first left 302 people dead and warnings about the drinking water were posted throughout the prefecture.

In 1885, a new foundry was established which used coal from Hokkaido and iron ore from China.

The 1896 Sanriku earthquake struck on June 15 at 7:32 pm while families were celebrating Boy's Festival on the beach. The earthquake measured magnitude 8.5 while the tsunami on the Iwate coast reached as high as 24 meters in places – the highest ever recorded in Japan at the time. The city of Kamaishi was completely destroyed. The French Catholic missionary Henri Lispard was also swept out to sea and died when the wave struck.

As an important foundry town, Kamaishi played a significant role in the Japanese war effort and was targeted by the U.S. Navy during World War II. On 14 July 1945, under the command of Rear Admiral John F. Shafroth Jr., the battleships USS South Dakota (BB-57), USS Indiana (BB-58), USS Massachusetts (BB-59), and USS Alabama (BB-60), the heavy cruisers USS Chicago (CA-136) and USS Quincy (CA-71), and nine destroyers bombarded the Japan Ironworks and warehouses, along with nearby oil tanks and vessels, to great effect. This was the first naval bombardment of the Japanese mainland. Rear Admiral John F. Shafroth Jr.'s battleships and cruisers, joined by two Royal Navy light cruisers, attacked again on 9 August. [7] The mill was also the site of the Sendai Prisoner of War Camp, [8] and 32 Allied prisoners were killed in the raids. A second naval bombardment followed on 8 August, specifically targeting the civilian portion the city. A total of 694 civilians and 30 Japanese military personnel were killed in the bombardment.

Kamaishi played its part in Japan's post-war boom, continuing its reputation as a steel town, a reputation reflected in the name of its rugby team - the Kaminashi Nippon Steel Rugby Club. In 1960, the town was crippled by a tsunami generated by the 1960 Valdivia earthquake. However, following the closure of the steel mills in 1988, the economy of city collapsed, and almost half its population moved away. Kamaishi is now known more for commercial fishing than heavy industry. On September 30, 2010, Foreign Policy magazine used Kamaishi as an example of Japan's relative decline in the "Lost Decade".

Tsunami waves as tall as 14 ft (4.3 m) surmounted the 1,950 m (6,400 ft) long and 63 m (207 ft) deep Kamaishi Tsunami Protection Breakwater, [13] which had been completed in March 2009, after three decades of construction, at a cost of $1.5 billion. [13] It was once recognized by the Guinness World Records as the world's deepest breakwater. [14] The subsequent decision to rebuild the breakwater at a cost of over 650 million dollars was criticised as "a waste of money that aims to protect an area of rapidly declining population with technology that is a proven failure". [15]

Numerous news videos were broadcast of the city, which can be recognized by a large green crane in the background and water rushing against tall buildings at the edge of the city.

Kamaishi has a mayor-council form of government with a directly elected mayor and a unicameral city legislature of 19 members. Kamaishi, together with the town of Ōtsuchi collectively contributes two seats to the Iwate Prefectural legislature. In terms of national politics, the city is part of Iwate 2nd district of the lower house of the Diet of Japan.

Kamaishi was famous in modern times for its steel production, although after the closure of the blast furnace at Nippon Steel Kamaishi Iron and Steel Works and the scaling down of production in 1989, the local economy suffered greatly. The city has most recently made strong efforts towards promotion of eco-tourism. In 2015, the Hashino iron mining and smelting site was accepted as a UNESCO World Heritage Site as part of the Sites of Japan's Meiji Industrial Revolution: Iron and Steel, Shipbuilding and Coal Mining. Commercial fishing and shellfish production are also important economic activities.

Kamaishi was the home to one of Japan's most successful rugby union clubs, Nippon Steel Kamaishi, which existed from 1959 to 2001 and won several national titles during the 1970s and 1980s. The club was succeeded by the modern Kamaishi Seawaves. [16] As part of the post-disaster recovery of the region, Kamaishi will host part of the 2019 Rugby World Cup at a new stadium holding 16,000 spectators. [17]

Kamaishi won the "Award for Character" of the Rugby World Cup 2019 awards. 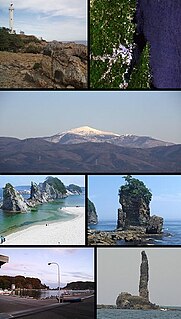 Ōtsuchi is a town located in Kamihei District, Iwate Prefecture, in the Tōhoku region of northern Japan. As of 1 March 2020, the town had an estimated population of 11,572 and a population density of 58 persons per km² in 5308 households. The total area of the town is 200.42 square kilometres (77.38 sq mi). 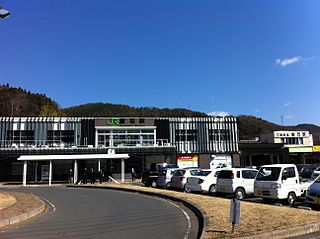 Kamaishi Station is a junction railway station in the city of Kamaishi, Iwate, Japan, operated by East Japan Railway Company and the Third-sector Sanriku Railway.

The Yamada Line is a regional railway line in Japan operated by East Japan Railway Company. The railway line connects Morioka Station in Morioka City to Miyako Station in Miyako City, and is named after the town of Yamada in Iwate Prefecture, which the line used to serve. The railway line traverses through the Kitakami Mountains, running parallel to National Route 106 for most of its length.

The Sanriku Railway is a railway company in Iwate Prefecture in northern Japan. The company and its lines are also known as Santetsu (三鉄). The company was founded in 1981, as the first "third sector" railway line in the country, excluding special cases such as freight railways in seaports. Its lines are former Japanese National Railways (JNR) lines, that were going to be closed. Santetsu acquired these lines in 1984. The company also operates a travel agency and other businesses. 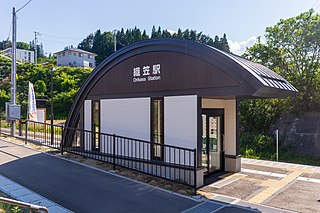 Iwate-Funakoshi Station is a Sanriku Railway Company station located in Yamada, Iwate Prefecture, Japan. A sign on the station platform indicates that this was the easternmost railway station on Honshu island. 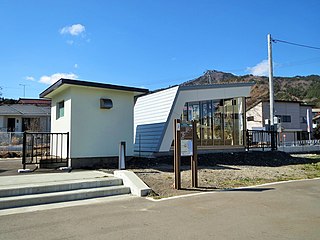 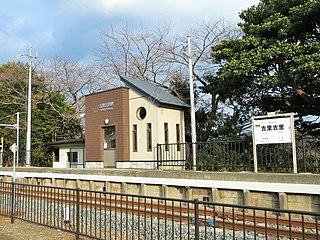 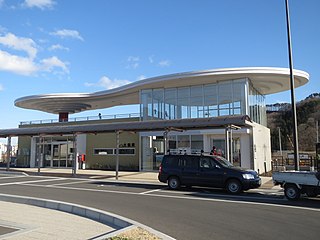 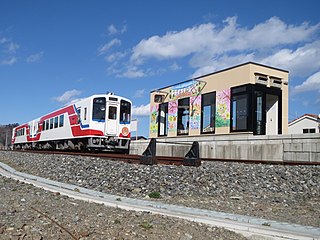 The Sanriku Coast is a coastal region on the Pacific Ocean, extending from southern Aomori Prefecture, through Iwate Prefecture and northern Miyagi Prefecture in northeastern Honshū, which is Japan's main island. The name comes from the historical region of Sanriku, referring to the former provinces of Rikuō, Rikuchū and Rikuzen.

Sanriku Fukkō National Park is a national park extending along the Sanriku Coast of Japan from Hachinohe in Aomori Prefecture through Iwate Prefecture to Kesennuma in Miyagi Prefecture. The national park was created on 24 May 2013 and covers a land area of 28,537 hectares (110.18 sq mi) 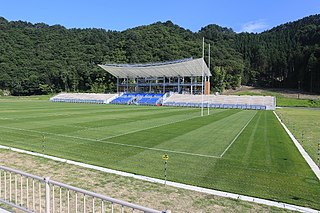 Kamaishi Recovery Memorial Stadium, also known as Kamaishi Unosumai Stadium, is a stadium in Unosumai-cho, Kamaishi, Iwate. Construction on the 16,187-seat venue broke ground in April 2017 and it was completed on 19 August 2018. It hosted one pool match during the 2019 Rugby World Cup, with another scheduled match that was cancelled due to Typhoon Hagibis.

The Kamaishi Expressway is a partially tolled two-lane national expressway in Iwate Prefecture, Japan. The expressway connects Kamaishi, Iwate on the prefecture's Pacific coast to the Tōhoku Expressway. It is owned and operated by partly by the East Nippon Expressway Company and the Ministry of Land, Infrastructure, Transport and Tourism. The expressway is signed as an auxiliary route of National Route 283 as well as E46 under the "2016 Proposal for Realization of Expressway Numbering."