Agence France-Presse (AFP) is a French private international news agency headquartered in Paris, France. Founded in 1835 as Havas, it is the world's oldest news agency.

Agence France-Presse has its origins in the Agence Havas, founded in 1835 in Paris by Charles-Louis Havas, making it the world's oldest news service. [1] [2] The agency pioneered the collection and dissemination of news as a commodity, [1] and had established itself as a fully global concern by the late 19th century. [3] Two Havas employees, Paul Julius Reuter and Bernhard Wolff, set up their own news agencies in London and Berlin respectively. [1]

In 1940, when German forces occupied France during World War II, the news agency was taken over by the authorities and renamed "Office français d'information" (French Information Office); only the private advertising company retained the name Havas. [4] On 20 August 1944, as Allied forces moved on Paris, a group of journalists in the French Resistance seized the offices of the FIO and issued the first news dispatch from the liberated city under the name of Agence France-Presse.

Established as a state enterprise, AFP devoted the post-war years to developing its network of international correspondents. One of them was the first Western journalist to report the death of the Soviet leader Joseph Stalin on 6 March 1953. AFP was keen to shake off its semi-official status, and on 10 January 1957, the French Parliament passed a law establishing its independence. Since that date, the proportion of the agency's revenues generated by subscriptions from government departments has steadily declined. Such subscriptions represented 115 million Euros in 2011. [5]

In 1982, the agency began to decentralize its editorial decision-making by setting up the first of its five autonomous regional centres, in Hong Kong, then a British dependent territory. Each region has its own budget, administrative director and chief editor. In September 2007, the AFP Foundation was launched to promote higher standards of journalism worldwide.

The Mitrokhin Archive identified six agents and two confidential KGB contacts inside Agence France-Presse who were used in Soviet operations in France. [6]

In October 2008, the Government of France announced moves to change AFP's status, including the involvement of outside investors. On 27 November of that year, the main trade unions represented in the company's home base of France – the CGT, Force Ouvrière, Syndicat national des journalistes, [9] Union syndicale des journalistes CFDT [10] and SUD, launched an online petition to oppose what they saw as an attempt to privatise the agency.

On 10 December 2009, the French Culture Minister Frédéric Mitterrand announced that he was setting up a Committee of Experts under former AFP CEO Henri Pigeat to study plans for the agency's future status. [11] On February 24, 2010, Pierre Louette unexpectedly announced his intention to resign as CEO by the end of March, and move to a job with France Télécom.

In November 2013, AFP and Getty Images were ordered to pay $1.2 million compensation to freelance photojournalist Daniel Morel for using his images posted on Twitter related to the 2010 Haiti earthquake without his permission, in violation of copyright and Twitter's terms of service. [12] [13]

The current CEO and chairman is Fabrice Fries and the Global News Director is Phil Chetwynd. [14]

In 1983, the Albert Londres Prize was awarded to Patrick Meney, [15] who wrote a series of articles about 600 French people forcibly detained in the Gulag after World War II. In 1984, his book Les Mains coupées de la Taïga was published.

In 1988, Sammy Ketz received the next Albert Londres Prize. [15] Together with his colleague from the liberation movement, Serge Chalandon, he covered the events of the Libyan Civil War for 6 years.

On October 17, 2014, AFP international director Michèle Léridon received the Investigation and Reporting Award at the International Congress of Journalism and Information. Michèle Léridon sat the author of the article "Covering ISIS", which was posted on the agency's blog.

In December 2014, Bülent Kiliç was named Time magazine Photojournalist of the Year for his coverage of events in the Middle East and Europe. [16] The photographer received the same acknowledgement from The Guardian newspaper. [17]

In 1988, the agency has its own department of infographics - AFP Graphics, which today creates about 70 graphics per day. According to the information provided by the agency's website, thematically infographics have the following distribution: 31% - politics, 27% - economics, 18% - sports, 12% - society, 10% - general news, 2% - culture and media. Infographics are available in 6 languages: French, English, Arabic, Portuguese, Spanish and German.

In 2014, AFP launches a content platform that is available on all electronic media: computers, tablets and mobile phones. AFP Forum is divided into several sections, including homepage, text materials, photos, videos and graphics. News can be filtered by headings (news, business, sports, science), hashtags and by geographical regions (Africa, North America, Europe, etc.). All information is available in 8 languages: French, English, Arabic, Portuguese, Spanish, German, Traditional and Simplified Chinese. In total, there are about 1250 illustrated materials per day, available in XML, HTML, TXT, NewsML or WML formats.

In July 2001, the agency announced the launch of AFP Video services, a video graphics division. Already in 2007, the agency launches AFPTV - a project in which all news from 2011 appear in HD video format. As of 2015, 200 videos in 7 different languages appear on the site every day.

AFP operates under a 1957 law as a commercial business independent of the French government. AFP is administered by a CEO and a board comprising 15 members:

The mission of AFP is defined in its statute: [18]

The board elects the CEO for a renewable term of three years. AFP also has a council charged with ensuring that the agency operates according to its statutes, which mandate absolute independence and neutrality. Editorially, AFP is governed by a network of senior journalists.

The primary client of AFP is the French government, which purchases subscriptions for its various services. In practice, those subscriptions are an indirect subsidy to AFP. The statutes of the agency prohibit direct government subsidies.

A news agency is an organization that gathers news reports and sells them to subscribing news organizations, such as newspapers, magazines and radio and television broadcasters. A news agency may also be referred to as a wire service, newswire, or news service.

Euronews is a European television news network, headquartered in Lyon, France. The network began broadcasting on 1 January 1993 and covers world news from a European perspective. 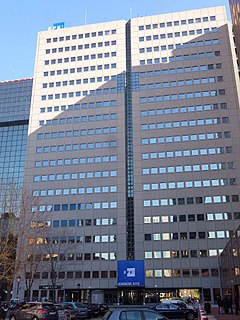 The International Press Telecommunications Council (IPTC), based in London, United Kingdom, is a consortium of the world's major news agencies, other news providers and news industry vendors and acts as the global standards body of the news media.

Havas SA is a French multinational advertising and public relations company, headquartered in Paris, France. It operates in more than 100 countries and is one of the largest global advertising and communications groups in the world. Havas consists of three main operational divisions.

Charles-Louis Havas was a French writer, translator, and founder of the first news agency Agence Havas.

Media Information Agency is a public information service of North Macedonia. It is among the news agencies that provide professional standards in the sphere of its basic function - covering events, news and information. MIA works 24 hours a day distributing news in Macedonian, English and Albanian supporting the entire information space - printed and electronic media in the country, the media on Macedonian language abroad, the embassies of North Macedonia and other organisations, institutions, missions

MINDS International is an association of news agencies that collaborate in the digital media business. MINDS was founded in 2004 by the World Association of Newspapers and News Publishers and five news agencies, with funding from the European Union. Currently, the MINDS network consists of more than twenty member agencies from around the world.

The European Alliance of News Agencies (EANA) is a federation of news agencies in Europe. The organisation was founded in 1956 and is based in Bern at the seat of the Swiss Telegraphic Agency (sda). EANA has currently 32 members (2015). EANA´s predecessor Agences Alliées was founded in 1924 and was active until the World War II when the activities were discontinued.

Jean Marin, real name Yves Morvan was a French journalist and resistant. He was the president of Agence France-Presse from 1957 to 1975.

The Office français d'information was the press agency controlled by the Vichy regime during the German occupation.

Shah Marai was an Afghan journalist and photographer. He was chief photographer for Agence France-Presse's Kabul Bureau from 1996 to his death in 2018. In total, AFP distributed more than 18,000 of his pictures. He was one of the casualties of the suicide bombing in Afghanistan on 30 April 2018. He was survived by his wife and six children.

The Telegraphen-Korrespondenz Bureau, also referred to by many other names was a news agency founded in the Austrian Empire in 1849 by Joseph Tuvora (1820–1872) under the auspices of the Austrian government. It is a direct predecessor of the current Austria Press Agency.

Michèle Léridon was a French journalist and news director. A longtime journalist and editor at Agence France-Presse (AFP), she was its global news director from 2014 to 2019, when she became a member of the French Conseil supérieur de l'audiovisuel.