List of international presidential trips made by Muhammadu Buhari

President Muhammadu Buhari has travelled out of Nigeria a total of 51 times since assuming office in 2015.

Here is a summary of the countries President Muhammadu Buhari of Nigeria has visited as President. There are two trips that he made to the United Kingdom, one on his official vacation and one for medical treatment that are included in this list. [1]

The following is a list of international presidential trips made by Buhari in 2015.

The following is a list of international presidential trips made by Buhari in 2016.

The following is a list of international presidential trips made by Buhari in 2017.

The following is a list of international presidential trips made by Buhari in 2018.

The following is a list of international presidential trips made by Buhari in 2019.

The following is a list of international presidential trips made by Buhari in 2020.

Muhammadu Buhari is a Nigerian politician currently serving as the President of Nigeria, in office since 2015. He is a retired military general of the Nigerian Army and previously served as military head of state from 1983 to 1985, after taking power in a military coup d'état. The term Buharism is ascribed to the conservative right wing policies of his military regime. Buhari has stated that he takes responsibility for anything over which he presided during his military rule, and that he cannot change the past. He has described himself as a "converted democrat". 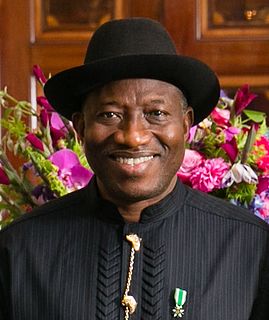 Goodluck Ebele Azikiwe Jonathan is a Nigerian politician who served as the President of Nigeria from 2010 to 2015. He lost the 2015 presidential election to former military ruler Muhammadu Buhari, becoming the first incumbent president to concede electoral defeat. Prior to that, he served as Vice President of Nigeria from 2007 to 2010 and as Governor of Bayelsa State from 2005 to 2007.

Political corruption is a persistent phenomenon in Nigeria. In 2012, Nigeria was estimated to have lost over $400 billion to corruption since independence. In 2018 the country ranked 144th in the 180 countries listed in Transparency International's Corruption Index.

Tunde Bakare is a Nigerian Prophetic-Apostolic pastor. He was reportedly arrested in March 2002 after preaching sermons critical of then-president Olusegun Obasanjo. He was the running mate of the Nigerian presidential candidate Muhammadu Buhari in the 2011 Nigerian presidential election. He was formerly a pastor at the Deeper Life Bible Church before he left to join the Redeemed Christian Church of God which he soon left to form his own.

Gbemisola Ruqayyah Saraki is currently the Minister of State Transportation of the Federal Republic of Nigeria appointed by President Muhammadu Buhari on 21st August, 2019 and former senator who was elected to represent the Kwara central Senatorial district in the year 2003 under the platform of the People's Democratic Party. She was elected into the House of Representatives in 1999 representing Asa/Ilorin West Federal Constituency, Kwara State. She’s a sibling to Former Senate President of the Federal Republic of Nigeria, Bukola Saraki.

John Odigie Oyegun is a Nigerian politician who served as the first national chairman of All Progressives Congress (APC) in Nigeria. He was also the Executive Governor of Edo State between 1992 and 1993, during the aborted Nigerian Third Republic.

Colonel Hameed Ibrahim Ali is the current Comptroller General of the Nigerian Customs Service. A retired military officer, he previously served as Military Governor of Kaduna State from 1996 to 1998. After retirement, he became secretary of the Arewa Consultative Forum – a political and cultural association of leaders in Northern Nigeria.

The All Progressives Congress (APC) is a political party in Nigeria, formed on 6 February 2013 in anticipation of the 2015 elections. APC candidate Muhammadu Buhari won the presidential election by almost 2.6 million votes. Incumbent President Goodluck Jonathan conceded defeat on 31 March. This was the first time in Nigeria's political history that an opposition political party unseated a governing party in a general election and one in which power transferred peacefully from one political party to another. In addition, the APC won the majority of seats in the Senate and the House of Representatives in the 2015 elections, though it fell shy of winning a super-majority to override the ability of the opposition People's Democratic Party to block legislation.

General elections were held in Nigeria on 28 and 29 March 2015, the fifth quadrennial election to be held since the end of military rule in 1999. Voters elected the President and members to the House of Representatives and the Senate. The incumbent president, Goodluck Jonathan sought his second and final term.

Aisha Halilu is the First Lady of Nigeria and wife of the current President Muhammadu Buhari, who assumed office on 29 May 2015 after defeating the then-incumbent President Goodluck Jonathan. Aisha is a cosmetologist, beauty therapist and author.

Amina Bala Zakari was the former Acting Chairman of the Independent National Electoral Commission (INEC), the Nigerian electoral body. Her appointment took effect from the directive of the President Muhammadu Buhari following the expiration of the tenure of her predecessor, Attahiru Jega on July 30, 2015.

Abba Kyari is the Chief of Staff to the President of Nigeria, Muhammadu Buhari and was appointed to the position on 27 August 2015.

Mahmood Yakubu is a Nigerian academic and current Chairman of the Independent National Electoral Commission (INEC). Subject to approval by the Council of State, Mahmood was appointed to office by President Muhammadu Buhari on 21 October 2015, succeeding Amina Zakari, who served as acting chairman.

The $2 billion arms deal is an arms procurement deal in Nigeria that resulted in the embezzlement of $2 billion through the office of the National Security Adviser under the leadership of Colonel Sambo Dasuki, the former National Security Adviser. The illegal deal was revealed following an interim report of the presidential investigations committee on arms procurement under the Goodluck Jonathan administration. The committee report showed an extra-budgetary spending to the tune of N643.8 billion and an additional spending of about $2.2 billion in the foreign currency component under the Goodluck Jonathan administration.

Buhari's anti-corruption war is an anti-graft war declared by Muhammadu Buhari, the 4th democratic President of Nigeria. This is a war against all forms of corruption in Nigeria. During the president's election campaign in 2015, he vowed to fight against corruption and insecurity if elected. Since his election in April 2015, anti-graft war remain one of his topmost priority. The anti-graft war was endorsed by the President of the United States. The United States Secretary of State, John Kerry at the World Economic Forum held at Davos in Switzerland extolled Buhari's anti-graft war. In October 2015, the United Kingdom pledge her support for Buhari's anti-corruption war. According to Grant Shapps, the minister for international development, "UK is fully committed to helping Nigeria increase its security, stability and prosperity. "We would continue to provide capacity building, technical and investigative support to Nigeria to tackle corruption. Corruption in Nigeria also affects the UK directly. Where we have evidence, we will continue to take action to protect the integrity of the UK's financial system and prevent. Some Nigerian described the war as "perfect" while others described it as "selective". William Kumuyi, the founder and general overseer of Deeper Christian Life Ministry described Buhari's anti-corruption war as a step in right direction. However, the president has been criticized and accused of leading a selective war against corruption. Several people claimed that his war against corruption focus on members of the opposition party, the People's Democratic Party.

The first confirmed case of the pandemic of coronavirus disease 2019 in Nigeria was announced on 27 February 2020, when an Italian citizen in Lagos tested positive for the virus, caused by SARS-CoV-2. On 9 March 2020, a second case of the virus was reported in Ewekoro, Ogun State, a Nigerian citizen who had contact with the Italian citizen.