This is a list of islands of Honduras. There are at least 99 islands in Honduras. [1]

The following islands are part of Honduras: [1]

The Bay Islands is a group of islands off the coast of Honduras. Collectively, the islands form one of the 18 departments of Honduras. The departmental capital is Coxen Hole, on the island of Roatán. 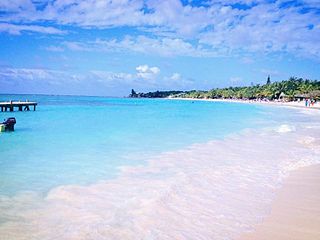 Roatán is an island in the Caribbean, about 65 kilometres (40 mi) off the northern coast of Honduras. It is located between the islands of Utila and Guanaja, and is the largest of the Bay Islands of Honduras. The island was formerly known in English as Ruatan and Rattan.

Guanaja is one of the Bay Islands of Honduras and is in the Caribbean. It is about 70 kilometres (43 mi) off the north coast of Honduras, and 12 kilometres (7.5 mi) from the island of Roatan. One of the cays off Guanaja, also called Guanaja or Bonacca or Low Cay, is near the main island, and contains most of the approximately 5,538 people who live in Guanaja. The densely populated cay has been described as the Venice of Honduras because of the waterways that run through it. The other two main settlements on Guanaja are Mangrove Bight and Savannah Bight. Smaller settlements includes Pelican Reef, East End and North East Bight.

Utila(Isla de Utila) is the smallest of Honduras' major Bay Islands, after Roatán and Guanaja, in a region that marks the south end of the Mesoamerican Barrier Reef System, the second-largest in the world. 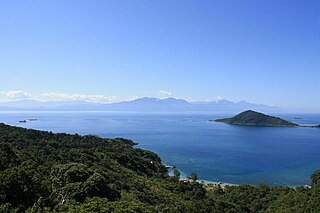 The Cayos Cochinos or Cochinos Cays consist of two small islands and 13 smaller coral cays situated 30 kilometres (19 mi) northeast of La Ceiba on the northern shores of Honduras. Although geographically separate, they belong to the Bay Islands department and are part of Roatán municipality. The population numbered 108 at the 2001 census. The total land area measures about 2 km2 (0.8 sq mi).

Cayo Sabinal is a cay on the northern coast of Cuba, in the municipality of Nuevitas, Camagüey Province. Has an area of 335 km².

The Las Aves Archipelago is a pristine archipelago in the Caribbean Sea, and is part of the Federal Dependencies of Venezuela. It is located north of the Venezuelan states of Aragua and Carabobo, between the Dutch island Bonaire in the west, and the Los Roques Archipelago in the east, at 12°00′N67°40′W. The prime economic importance of the islands lies in fishing. "Las Aves" translates to "The Birds" in English.

The Colorados Archipelago is a chain of isles and cays on Cuba's north-western coast.

Cayo Sur is a small uninhabited island less than two hectares in size located in the Caribbean sea. The surrounding area has an abundance of fish and oil.

Guanaja Airport is an airport serving Guanaja, an island of the Bay Islands Department in Honduras.

Isla Cardona, also known as Sor Isolina Ferré Island, is a small, uninhabited island located 1.30 nautical miles south of the mainland Puerto Rican shore across from Barrio Playa, on the west side of the entrance to the harbor of Ponce, Puerto Rico. The small island is considered part of barrio Playa. It is home to the 1889 Cardona Island Light, which is listed in the U.S. National Register of Historic Places. Together with Caja de Muertos, Gatas, Morrillito, Ratones, Isla del Frio, and Isla de Jueyes, Cardona is one of seven islands ascribed to the municipality of Ponce. The island gained notoriety in 2010 when the Puerto Rican Bird Society made it a target for the eradication of the black rat.

Útila Airport is an airport serving Útila, Islas de la Bahía, Honduras. It handles regional and international air traffic for the town of Útila. The airport is served by several airlines on a daily schedule, as well as numerous private and charter flights.

Honduras is a tourist destination that attracts visitors to its natural environment, white and dark sand beaches, coral reefs, abundant flora and fauna and archaeological sites. Other attractions include the area's customs and traditional foods. 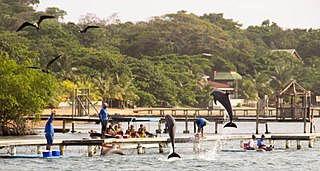 Roatan Institute for Marine Sciences (RIMS) is a scientific research center located in Roatán, department of Islas de la Bahía, in the Republic of Honduras.