List of mountains of Switzerland accessible by public transport

This is a list of mountains of Switzerland above 800 metres whose summits are accessible by public transport. This list includes mountains with a topographic prominence of at least 30 metres [1] that have a station above the height of their key col and within 120 metres (height difference) from the summit. The station can be reached by cable car, funicular, railway or bus. This list notably includes the Klein Matterhorn and the Säntis, respectively the highest [2] and the most prominent [3] peaks of Europe with public transport access. It also includes the Chasseral, the most isolated summit of the country accessible to pedestrians.

At 2,501.9 metres above sea level, Säntis is the highest mountain in the Alpstein massif of northeastern Switzerland. It is also the culminating point of the whole Appenzell Alps, between Lake Walen and Lake Constance. Shared by three cantons, the mountain is a highly visible landmark thanks to its exposed northerly position within the Alpstein massif. As a consequence, houses called Säntisblick can be found in regions as far away as the Black Forest in Germany. Säntis is among the most prominent summits in the Alps and the most prominent summit in Europe with an observation deck on the top. The panorama from the summit is spectacular. Six countries can be seen if the weather allows: Switzerland, Germany, Austria, Liechtenstein, France, and Italy.

The Stanserhorn is a mountain in Switzerland, located in the canton of Nidwalden near to the border with Obwalden, with the peak at 1,898 metres (6,227 ft) above sea level. 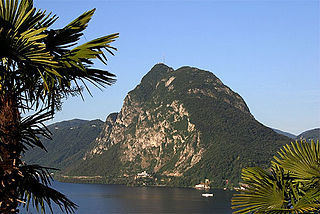 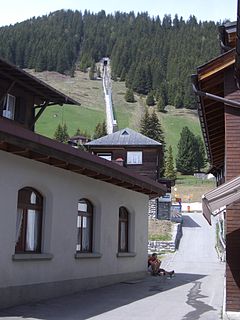 The Allmendhubel is a hill above Mürren, overlooking the valley of Lauterbrunnen in the canton of Bern. Its summit is easily accessible from Mürren by a funicular, the Allmendhubelbahn, which reaches a height of 1,907 metres. A restaurant is also located near the top.