Little Cumbrae (Scots : Wee Cumbrae, Scottish Gaelic : Cumaradh Beag) or Little Cumbrae Island [6] is an island in the Firth of Clyde, in North Ayrshire, Scotland. The island is known locally as Wee Cumbrae.

The Gaelic name Cumaradh means "place of the Cymric people", referring to the Brittonic-speaking inhabitants of the Kingdom of Strathclyde. [1] Alternatively, the name Cumbrae may derive from Kil Maura meaning "cell or church of a female saint". [7]

The Cumbraes are referred to as the Kumreyiar in the Norse Saga of Haakon Haakonarson . [8]

Today the island's main settlement is at Little Cumbrae House on the eastern shore, facing the Scottish mainland.

Unlike its larger neighbour, Little Cumbrae is formed almost entirely from extrusive igneous rocks. These are a mix of Carboniferous age basalts, mugearite and hawaiite lava flows cut by a similarly aged WSW-ENE aligned dyke of alkali olivine diorite. A later northwest-southeast aligned swarm of dykes of Palaeogene age intrude these rocks whilst several geological faults run generally NW-SE. There are limited outcrops of sedimentary rock in the east, these being of the Eileans Sandstone assigned to the Clyde Sandstone Formation of the Carboniferous age Inverclyde Group. A raised beach is developed along the lower-lying east coast of the island on which have accumulated marine deposits and blown sand. Glacial striations betray the broadly north-south movement of a glacier over the island during the last ice age. Small pockets of peat have accumulated during the post-glacial period. [9]

Robert II is said to have built a castle on the island which was demolished by Cromwell's soldiers in 1653. [10]

In the early 20th century, under the ownership of Evelyn Stuart Parker, a new 'mansion house' was created from the original single storey farmhouse, the gardens were laid out to a plan by Gertrude Jekyll, the renowned garden designer, and substantial repairs were undertaken to the castle and the original lighthouse. The original work commenced in 1913, with subsequent alterations made between 1926 and 1929 when the square tower and top floor were added.

Little Cumbrae is the birthplace of James Archbald, the first mayor of Carbondale, Pennsylvania.

James Ewing built the first Little Cumbrae lighthouse on the top of Lighthouse Hill in 1757. This was the second lighthouse in Scotland. [11] An open fire was lit at the top of a circular stone tower. Remains of this old structure can still be seen and are designated a scheduled ancient monument. [12]

The traditional Cumbrae Lighthouse was built in 1793 by Thomas Smith under commission from the Commissioners of the Northern Lights. The lighthouse lies on a broad raised beach on the western shore of the island looking out into the Firth. It had a foghorn, slipway, jetty, and boathouse. The original oil lamps were replaced by Argand lamps in 1826 and a solar-powered light was installed in 1974. [11] The 1793 tower has been unused since 1997, with the light on 36-foot (11-metre) hexagonal/cylindrical tower adjacent to the old generator house.

Little Cumbrae was privately purchased in 2003 and there were plans for its development as a memorial park, nature reserve and corporate escape.

The island was sold again in July 2009 for £2 million. [13] The buyers of the island, a Scottish millionaire couple of Indian origin, Sarwan and Sunita Poddar, opened a yoga and meditation centre there with the help of yoga guru Swami Baba Ramdev. [14] [15] There have also been rumours of the new owners planning to rename it "Peace Island", but those have been denied. [16] [17] 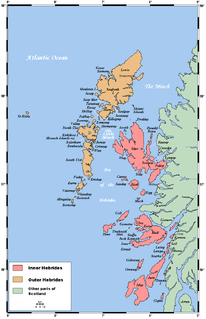 The Hebrides comprise a widespread and diverse archipelago off the west coast of mainland Scotland. There are two main groups: the Inner and Outer Hebrides.

The Islands of the Firth of Clyde are the fifth largest of the major Scottish island groups after the Inner and Outer Hebrides, Orkney and Shetland. They are situated in the Firth of Clyde between Ayrshire and Argyll and Bute. There are about forty islands and skerries, of which only four are inhabited and only nine larger than 40 hectares. The largest and most populous are Arran and Bute, and Great Cumbrae and Holy Island are also served by dedicated ferry routes. Unlike the four larger Scottish archipelagos, none of the isles in this group are connected to one another or to the mainland by bridges.

Great Cumbrae is the larger of the two islands known as The Cumbraes in the lower Firth of Clyde in western Scotland. Home to the National Watersports Centre, the Cathedral of the Isles and the University Marine Biological Station, Millport, the holiday island has an 18-hole golf course which sweeps almost to the summit, and a round-island road much favoured for family cycle runs. 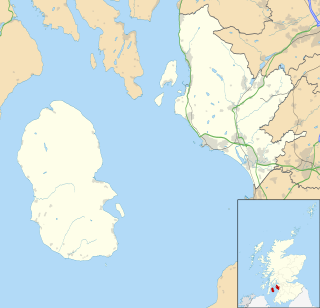 Millport is the only town on the island of Great Cumbrae in the Firth of Clyde off the coast of North Ayrshire. The town is 4 miles south from the Caledonian MacBrayne ferry slipway.

The Firth of Clyde is the mouth of the River Clyde and the deepest coastal waters in the British Isles, sheltered from the Atlantic Ocean by the Kintyre peninsula which encloses the outer firth in Argyll and Ayrshire. The Kilbrannan Sound is a large arm of the Firth of Clyde, separating the Kintyre Peninsula from the Isle of Arran. Within the Firth of Clyde is another major island – the Isle of Bute. Given its strategic location, at the entrance to the middle/upper Clyde, Bute played a vitally important military (naval) role during World War II.

The Holy Island or Holy Isle is one of a number of islands in the United Kingdom which go under the name "Holy Island". It is located in the Firth of Clyde, off the west coast of central Scotland, inside Lamlash Bay on the larger Isle of Arran. The island is around 3 kilometres (1.9 mi) long and around 1 kilometre (0.6 mi) wide. Its highest point is the hill Mullach Mòr.

The County of Bute, also known as Buteshire, is a historic county and registration county of Scotland.

Sanda Island is a small privately owned island in Argyll and Bute, Scotland, off the southern tip of the Kintyre peninsula, near Southend and Dunaverty Castle.

The Cumbraes are a group of islands in the Firth of Clyde, Scotland. The islands belong to the traditional county of Bute and the modern unitary authority of North Ayrshire. 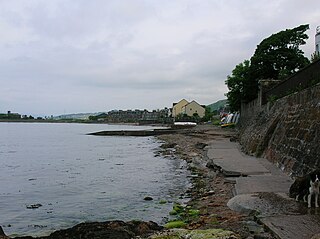 Fairlie is a village in North Ayrshire, Scotland.

The University Marine Biological Station Millport (UMBSM) was a higher education institution located on the island of Great Cumbrae in the Firth of Clyde, Scotland, and run by the University of London. It closed in 2013 and is now Millport Field Centre, run by the Field Studies Council. 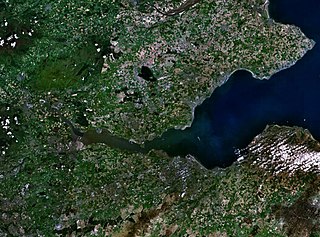 The Islands of the Forth are a group of small islands located in the Firth of Forth and in the estuary of the River Forth on the east coast of Scotland. Most of the group lie in the open waters of the firth, between the Lothians and Fife, with the majority to the east of the city of Edinburgh. Two islands lie further west in the river estuary.

Little Cumbrae Castle sits on Allimturrail or Castle Island, a small tidal island, situated off the east coast of Little Cumbrae, in the Firth of Clyde. It is designated as a scheduled monument.

MV Keppel is a passenger-only ferry built in 1961 for the Tilbury to Gravesend crossing. She had twenty years of service on the Largs to Millport route. Since 1993, she has operated in Malta.

The modern names of Scottish islands stem from two main influences. There are many names that derive from the Scottish Gaelic language in the Hebrides and Firth of Clyde. In the Northern Isles most place names have a Norse origin. There are also some island place names that originate from three other influences, including a limited number that are essentially English language names, a few that are of Brittonic origin and some of an unknown origin that may represent a pre-Celtic language. These islands have all been occupied by the speakers of at least three and in many cases four or more languages since the Iron Age, and many of the names of these islands have more than one possible meaning as a result.

FSC Millport, run by the Field Studies Council, is located on the island of Great Cumbrae in the Firth of Clyde, Scotland. The field centre was formerly known as the University Marine Biological Station Millport (UMBSM), a higher education institute run by the University of London in partnership with Glasgow University but was closed due to the withdrawal of higher education funding in 2013. FSC reopened the centre in 2014 and continues to host and teach university, school and college groups and to support and host research students from all over the world, whilst also extending its educational reach and providing a variety of courses in natural history and outdoor environmental activities for adult learners and families to enjoy. The centre is a very popular conference venue hosting many international events. The Robertson Museum and Aquarium is open to visitors between March and November. The centre also functions as a Meteorological Office Weather Station and Admiralty Tide Monitor.