Malabar Gopalan Sreekumar (born 25 May 1957), better known as M.G. Sreekumar is an Indian playback singer, composer, music producer, television presenter and film producer, who works predominantly in Malayalam cinema. He has sung more than 2000 songs in various Indian languages including Malayalam, Tamil, Telugu, Hindi, and Sanskrit. He owns a music company named KMG Musics and the Saregama School of Music in Thiruvananthapuram. Sreekumar has won several awards, [2] including two National Film Awards, three Kerala State Film Awards and 5 Filmfare Awards South. He was also honoured with the Harivarasanam Award by the Government of Kerala in 2016. His career as a singer spans over 44 years. [3] [4]

Sreekumar made his debut in the Malayalam movie Coolie (1983) Directed by Ashok Kumar. The Malayalam movie Chithram (1988) directed by Priyadarshan, starring Mohanlal, was the first where Sreekumar sang all the songs. He has sung more than 35,000 songs [5] for films in Malayalam, Tamil, Hindi, Kannada and Telugu.[ citation needed ]

He worked as music director in Malayalam films such as Chathurangam (2002) and Thandavam (2002), Priyadarshan's Kanchivaram (2008), Mohanlal's Alexander the Great and Oru Naal Varum.[ citation needed ]

He anchored a TV show named SaReGaMa on Asianet and was a judge for the reality show Idea Star Singer . Now he is a judge in Top Singer on Flowers TV.[ citation needed ]

His appointment as chairman of Kerala Sangeeta Nataka Akademi by the LDF government of Kerala sparked controversy due to his close relations with its political rival BJP. [6]

Sreekumar was born on May 25, 1957 at Haripad, in Alappuzha district, Kerala as the younger son of music composer and harmonist Malabar Gopalan Nair and Harikatha exponent Kamalakshi Amma. [7] He is the younger brother of popular music director M. G. Radhakrishnan and popular Carnatic musician Dr. K. Omanakkutty, who were both much elder to him. Sreekumar and Lekha, his future wife, first saw each other in 1988 at Thycaud Dharma Sastha Temple, Thiruvananthapuram, but they met each other only few days later after a concert. Gradually, they developed friendship and later began living together. Sreekumar and Lekha married on 14 January 2000 at the Mookambika Temple, Kollur. [8] [9]

Beside films, Sreekumar has composed many devotional albums. Majority of his songs are written by Rajeev Alunkal and Gireesh Puthenchery. 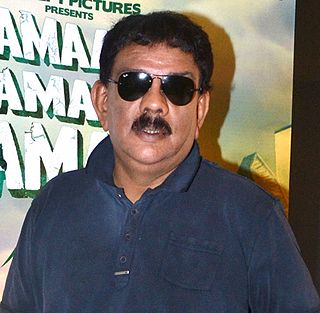 Priyadarshan is an Indian film director, screenwriter and producer who works predominantly in Malayalam and Hindi films, while also having done six films in Tamil and two films in Telugu. He has done about 27 films in Hindi alone, the highest number of films done by any Hindi film director after David Dhawan. He was one of the first directors in India to introduce rich color grading, clear sound and quality dubbing through his early Malayalam films. Priyadarshan has also directed many advertisement films. 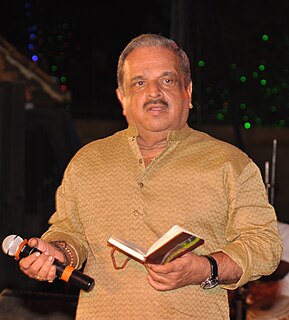 Paliyath Jayachandrakuttan, often credited as P. Jayachandran or Jayachandran, is an Indian playback singer and classical musician from Kerala. Jayachandran is best known for his captivating voice which gave him the title Bhava Gayakan by the music fraternity of South India. He has worked with many composers including G. Devarajan, M. S. Baburaj, V. Dakshinamoorthy, K. Raghavan, M. K. Arjunan, M. S. Viswanathan, Ilaiyaraaja, Koti, Shyam, A. R. Rahman, M. M. Keeravani and Vidyasagar. He has sung more than 10000 songs in total in different languages.He also acted in few films too. 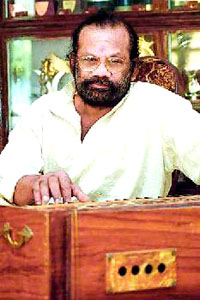 Unni Menon is an Indian film playback singer. He has recorded over 4000 songs in many Indian languages including Malayalam, Tamil, Telugu and Kannada. In the early part of his career, he spent many years as a low-profile playback singer. The turning point in his career came with the song "Pudhu Vellai Mazhai" from Mani Ratnam's award-winning 1992 Tamil film Roja, composed by A. R. Rahman. He has frequently associated with A. R. Rahman, lending his voice to nearly 27 popular songs from films like Karuththamma (1994) and Minsaara Kanavu (1997). 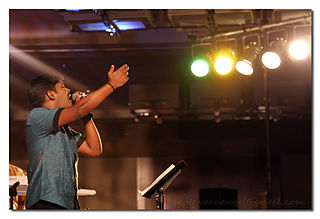 Mechery Louis Ouseppachan, known mononymously as Ouseppachan, is an Indian film composer and singer who primarily works in Malayalam films. He is a recipient of National Film Award, Filmfare Award and Kerala State Film Awards for his numerous film soundtrack albums and background scores.

The Filmfare Best Female Playback Award is given by the Filmfare magazine as part of its annual Filmfare Awards South for Malayalam films. The first Malayalam award was given in 2007. Before that, since 1997 till 2005, a common award for playback was available for both Male and Female singers of all the four South Indian languages. 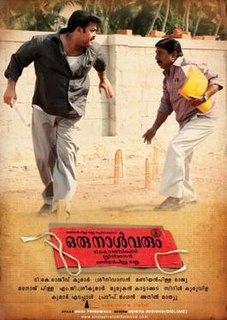 Oru Naal Varum is a 2010 Indian Malayalam-language satirical film directed by T. K. Rajeev Kumar, written by Sreenivasan, and produced by Maniyanpilla Raju. It stars Mohanlal and Sameera Reddy in her Malayalam debut, with Sreenivasan, Devayani, Nazriya Nazim, and Esther Anil in supporting roles. The film's soundtrack was composed by M. G. Sreekumar. Oru Naal Varum was released on 9 July 2010. The plot deals with corruption in India. 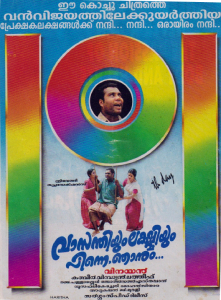 Vasanthiyum Lakshmiyum Pinne Njaanum is a 1999 Indian Malayalam-language drama film directed by Vinayan based on a screenplay by J. Pallassery. The film features Kalabhavan Mani, Kaveri, Praveena and Sai Kumar in the lead roles. The film centers around Ramu, a blind poet and singer who supports his family. However, their happiness dissipates soon after he gets cheated by a rich businessman. The film is reported to be inspired from Dosti (1964).

The 13th Asianet Film Awards honors the best films in 2010 and was held on 9 January 2011 at Willingdon Island in Kochi. The winners were announced on 1 January 2011. The title sponsor of the event is Ujala.

Praveena is an Indian Television actress and as dubbing artist who predominantly appears in Malayalam films and few Tamil and Telugu films.

Sudeep Kumar is an Indian playback singer. He sings Indian classical, devotional, and popular music. He has recorded more than 5000 songs in languages including Malayalam, Tamil, Kannada and Sanskrit, during a career spanning two decades. He is the president of Malayalam playback singers' association SAMAM 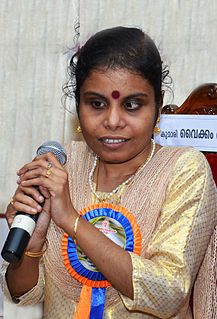 Vaikom Vijayalakshmi is an Indian playback singer from Kerala, India. She is an expert in a rare musical instrument called Gayatriveena. She won special jury mention for her much appreciated work in the 2013 film Celluloid. She was born at Vaikom on 7 October 1981 and later on moved to Chennai. 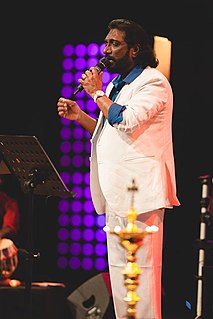 K. G. Markose is an Indian playback singer from Kerala. Markose, who is popular for rendering numerous Christian Devotional songs, has also sung over 100 film songs during the years 1980's to 2000's. Markose's music career was launched in 1979–1980 with the song "Kannipoomanam" in Balachandra Menon's Kelkkaatha Sabdham. After the success of his debut song, Markose became a regular singer in the "Ganamela" field. He has completed more than 3,000 stage shows in the country, as well as Europe, America, Australia, and gulf nations, among others.

Wikimedia Commons has media related to M. G. Sreekumar .
This page is based on this Wikipedia article
Text is available under the CC BY-SA 4.0 license; additional terms may apply.
Images, videos and audio are available under their respective licenses.