listen ); [1] 4 February 1922 – 24 January 2011) was an Indian vocalist from Karnataka, in the Hindustani classical tradition. He is known for the khayal form of singing, as well as for his popular renditions of devotional music ( bhajans and abhangs ). Bhimsen Joshi belongs to the Kirana gharana tradition of Hindustani Classical Music. Pt. Joshi is noted for his concerts, and between 1964 to 1982 Joshi toured Afghanistan, Italy, France, Canada and USA. He was the first musician from India whose concerts were advertised through posters in New York city, United States. [2] [3] Bhimsen Joshi was instrumental in organising the Sawai Gandharva Music Festival annually, as homage to his guru, Pandit Sawai Gandharva. [4]

Bhimsen Joshi was born on 4 February 1922 in a Kannada [7] Deshastha Madhva Brahmin family to Gururajrao Joshi and Godavaribai at Gadag in Dharwad district of Karnataka. [8] [9] His father, Gururaj Joshi, was a school teacher. Bhimsen was the eldest among 16 siblings. He lost his mother at a young age and was raised by his stepmother. [10]

As a child, Bhimsen was fascinated with music and musical instruments like the harmonium and tanpura [11] and would often follow processions accompanied by music bands. This exercise often tired him and he would curl up somewhere and sleep, forcing his parents to go to the police after efforts to trace him failed. Fed up, his father Gururajacharya Joshi came up with the solution, writing "son of teacher Joshi" on Bhimsen's shirts. This worked and those who found the boy sleeping would safely deposit him back to his house. [12]

Searching for a guru

Joshi heard a recording of Abdul Karim Khan's Thumri "Piya Bin Nahi Aavat Chain" in Raga Jhinjhoti when he was a child, which inspired him to become a musician. During this time, he also heard Pandit Sawai Gandharva at a performance in Kundgol. In 1933, the 11-year-old Joshi left Dharwad for Bijapur to find a master and learn music. [13] [14] With the help of money lent by his co-passengers in the train, Bhimsen reached Dharwad first and later went to Pune. Later he moved to Gwalior and got into Madhava Music School, a school run by Maharajas of Gwalior, with the help of famous sarod player Hafiz Ali Khan. He traveled for three years around North India, including in Delhi, Kolkata, Gwalior, Lucknow and Rampur, trying to find a good guru. He met Ustad Mushtaq Husain Khan of Rampur Gharana and stayed for more than one year. [15] Eventually, his father succeeded in tracking him down in Jalandar and brought young Bhimsen back home. [16]

In 1936, Sawai Gandharva, a native of Dharwad, agreed to be his guru. Joshi stayed at his house in the guru-shishya (teacher-student) tradition. Joshi continued his training with Sawai Gandharva.

Pt. Bhimsen Joshi first performed live in 1941 at the age of 19. His debut album, containing a few devotional songs in Marathi and Hindi, was released by HMV the next year in 1942. Later Joshi moved to Mumbai in 1943 and worked as a radio artist. His performance at a concert in 1946 to celebrate his guru Sawai Gandharva's 60th birthday won him accolades both from the audience and his guru. [17] In 1984, he received his 1st Platinum Disc,being the first Hindustani Vocalist to receive the award. [18]

Joshi's performances have been acknowledged by music critics such as S. N. Chandrashekhar of the Deccan Herald to be marked by spontaneity, accurate notes, dizzyingly-paced taans which make use of his exceptional voice training, and a mastery over rhythm. [19] The Hindu, in an article written after he was awarded the Bharat Ratna, said: Bhimsen Joshi was ever the wanderer, engendering brilliant phrases and tans more intuitively than through deliberation. [20] Joshi occasionally employed the use of sargam and tihai, and often sang traditional compositions of the Kirana gharana. His music often injected surprising and sudden turns of phrase, for example through the unexpected use of boltaans. Over the years, his repertoire tended to favour a relatively small number of complex and serious ragas; however, he remained one of the most prolific exponents of Hindustani classical music. Some of Joshi's more popular ragas include Shuddha Kalyan, Miyan Ki Todi, Puriya Dhanashri, Multani, Bhimpalasi, Darbari, Malkauns, Abhogi, Lalit, Yaman, Asavari Todi, Miyan ki malhar and Ramkali. He was a purist who has not dabbled in experimental forms of music, except for a series of Jugalbandi recordings with the Carnatic singer M. Balamuralikrishna.[ citation needed ]

Joshi's singing has been influenced by many musicians, including Smt. Kesarbai Kerkar, Begum Akhtar and Ustad Amir Khan. Joshi assimilated into his own singing various elements that he liked in different musical styles and Gharanas. [19] He along with Smt. Gangubai Hangal along with others took Kirana gharana to heights and are proudly referred as worthy son and daughter of kirana gharana. Both were from Old Dharwad district.

In devotional music, Joshi was most acclaimed for his Hindi and Marathi and Kannada Bhajan singing. He has recorded bhakti songs in Marathi,Santavani, Kannada Dasavani. [19]

Pt. Bhimsen Joshi was widely recognised in India due to his performance in the Mile Sur Mera Tumhara music video (1988), which begins with him and which was composed originally by him when he was asked to do so by the then Prime Minister Rajiv Gandhi. The video was created for the purpose of national integration in India, and highlights the diversity of Indian culture. Pt. Bhimsen Joshi was also a part of Jana Gana Mana produced by A. R. Rahman on the occasion of the 50th year of Indian Republic. [21]

Joshi sang for several films, including Basant Bahar (1956) with Manna Dey, in Marathi movie "Swayamvar zale Siteche" (1964) for famous song "Ramya Hi Swargahun lanka", in Kannada movie Sandhya Raga (1966) where he has sung extensively. It includes a song "e pariya sobagu" rendered in both Hindustani and Carnatic (Karnataka shastriya sangeetha) styles along with M. Balamuralikrishna. He sang Birbal My Brother (1973) with Pandit Jasraj. He also sang for the Bengali film Tansen (1958) and Bollywood Movie Ankahee (1985) which later fetched him National Film Award for Best Male Playback Singer. [22] His song 'Bhagyadalakshmi baaramma', a Purandara Dasa composition, was used by Anant Nag and Shankar Nag in the Kannada film Nodi Swami Naavu Irodhu Heege. [19] He also sang as a playback singer for the Marathi film Gulacha Ganapati, produced and directed by P. L. Deshpande [23]

Joshi and his friend Nanasaheb Deshpande organised the Sawai Gandharva Music Festival as a homage to his guru, Sawai Gandharva, along with the Arya Sangeet Prasarak Mandal in 1953, marking Gandharva's first death anniversary. The festival has been held ever since, typically on the second weekend of December in Pune, Maharashtra also in kundagol Dharwad district and has become not only a cultural event for the city, but an annual pilgrimage for Hindustani Classical music lovers all over the world. Joshi conducted the festival annually since 1953, until his retirement in 2002.[ citation needed ]

A classicist by training and temperament, Bhimsen Joshi was renowned for having evolved an approach that sought to achieve a balance between what may be termed as "traditional values and mass-culture tastes" and as such he went on to have supposedly the largest commercially recorded repertoire in Hindustani vocal music. Pt. Joshi's iconic status in the music world has earned him a whole generation of suni shagirds who by merely listening to him have picked up his style and not through any formal tutelage. His greatest endeavour in perpetuating his legacy could be the Sawai Gandharva Festival held at Pune annually since the year 1953 which seeks to promote a certain music culture. [24]

Bhimsen married twice. His first wife was Sunanda Katti, the daughter of his maternal uncle, whom he married in 1944. He had four children from Sunanda; Raghavendra, Usha, Sumangala, and Anand. [25] In 1951, he married Vatsala Mudholkar, his co-actor in the Kannada play Bhagya-Shree. Bigamous marriages among Hindus were prohibited by law in the Bombay Presidency; so he took up residency in Nagpur (capital of Central Province and Berar in 1951) where bigamy was allowed and married there for the second time. He did not divorce or separate from Sunanda. With Vatsala, he had three children; Jayant, Shubhada, and Shrinivas Joshi. [13] Initially, both his wives and families lived together, but when this did not work out, his first wife moved out with the family to live in a house in Limayewadi in Sadashiv Peth, Pune, where Bhimsen continued to visit them. [24] [26]

Joshi was admitted to Sahyadri Super Speciality Hospital on 31 December 2010 with gastrointestinal bleeding and bilateral pneumonia. Due to difficulty in breathing, he was put on ventilator support. He suffered convulsions and was put on dialysis too during his stay in hospital. Though he recovered briefly for three days when he was taken off the ventilator, his condition deteriorated thereafter. He died on 24 January 2011 . [27] He was cremated at Vaikunth Crematorium in Pune with full state honours. [28] 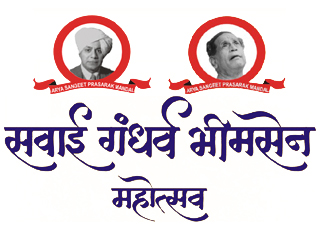 The Sawai Gandharva Bhimsen Mahotsav is an annual Indian Classical music festival held in Pune since 1953. The festival is hosted by the Arya Sangeet Prasarak Mandal (ASPM) and initiated by Bhimsen Joshi as a memorial music conference commemorating the life and work of Joshi's guru, Sawai Gandharva, the festival's namesake.

Ramachandra Kundgolkar Saunshi, popularly known as Pandit Sawai Gandharva, was a popular Hindustani Classical vocalist from Karnataka. He was a master in the genre of Kirana Gharana style. He was the first and foremost disciple of Ustad Abdul Karim Khan and guru of Bharat Ratna laureate Pt. Bhimsen Joshi.

Kundgol also spelled as Kundagola is a panchayat town in Dharwad district in the Indian state of Karnataka.

Pandit Jayateerth Mevundi is an Indian classical vocalist of the Kirana gharana.

Pandit Madhav Gudi was a Hindustani classical vocalist, who specialised in Khayal and renditions of devotional music, particularly of Dasavani. 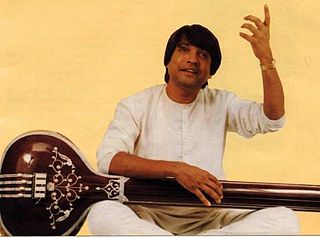 Pandit Ganapati Bhat, popularly known as Ganapati Bhat Hasanagi, is an Indian Hindustani classical vocalist. He belongs to Kirana Gharana-Gwalior Gharana. Currently, He is a resident Guru at prestigious Dr. Gangubai Hangal Gurukul Trust in Hubli. He has born and brought up in Hasanagi, a small village in the state of Karnataka in India.

R. K. Bijapure was an Indian harmonium player in the Hindustani classical tradition.

Upendra Bhat is a singer of Hindustani classical music, from the Kirana Gharana, who reminds the listeners of his legendary Guru - Pandit Bhimsen Joshi.

Pandit Vinayak Malharrao Torvi, is an Indian classical vocalist. He belongs to the Gwalior and Kirana gharanas. 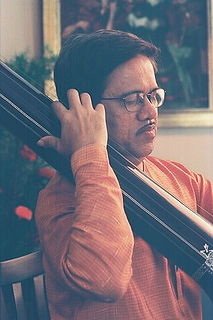 Pandit Vijay Sardeshmukh was an Indian classical vocalist and disciple of Kumar Gandharva He was an honored guru for post graduation studies in Pune University.

Hindustani vocalist Pandit M. Venkatesh Kumar was born 1 July 1953 in Lakshmipura in the Bellary region of northern Karnataka. He is best known for his rendition of devotional songs composed by the Haridasa.

Pandit Rajaram alias Raja Kale is an Indian vocalist, composer, and scholar of Indian classical, semi-classical, and devotional music. He is a senior disciple of Pandit Jitendra Abhisheki. He also received valuable guidance from Pt. C. P. Rele and Pt. Balasaheb Poonchwale from the Gwalior gharana. Pt. Raja Kale is known for rendering both old and new Hindustani classical music with an approach that is at once eclectic and focused on the performance.

Amjad Ali Khan is an Indian classical singer and teacher of Kirana Gharana. 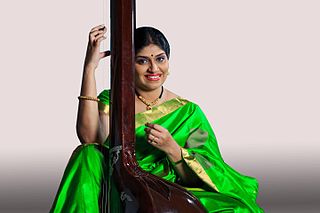 Gauri Pathare is an Indian musician and a winner of the All India Radio competition.

Pandit Parameshwar Hegde is an Indian Hindustani classical vocalist. He belongs to the Kirana, Gwalior and Patiala gharanas