Mysore Shrinivas Sathyu (Kannada : ಮೈಸೂರು ಶ್ರೀನಿವಾಸ ಸತ್ಯು) (born 6 July 1930) is a leading film director, stage designer and art director from India. He is best known for his directorial Garm Hava (1973), which was based on the partition of India. [1] He was awarded Padma Shri in 1975. [2]

Sathyu pursued his schooling and higher education at Mysore and Bangalore. In 1952, he quit college while working on his Bachelor of Science degree and instead plunged into the uncertain world of films in Bombay.

He freelanced as an animator in 1952–53. After being unemployed for nearly four years, he got his first salaried job as assistant director to filmmaker Chetan Anand.

He worked in theatre as a designer and director, including designing sets and lights for productions of Hindustani Theatre, Okhla Theatre of Habib Tanvir, Kannada Bharati and other groups of Delhi. In films, he has worked as an art director, camera-man, screenwriter, producer and director. His first film. His fas an independent Art director or Haqeeqat, a film by Chetan Anand, which won him recognition and the 1965 Filmfare Award for Best Art Direction.

His filmography includes over 15 documentaries and 8 feature films in Hindi, Urdu and Kannada. [2]

His best known work, Garm Hava (Scorching Winds, 1973), is one of the last cinema productions featuring 1950s Marxist cultural activists including Balraj Sahni and Kaifi Azmi. Garm Hava won several Indian national awards in 1974, including a National Integration Award. [3] It was screened in the competitive section at Cannes and was also the Indian entry at the Oscars. It won the Filmfare award for best screenplay. [4]

M. S. Sathyu currently is associated mainly with television and stage. In 2013, Sathyu featured in the popular Google Reunion ad, where he played the role of Yusuf, an elderly Pakistani man who is reunited with his childhood pre-partition friend from India, Baldev (Vishwa Mohan Badola). [5] The commercial went viral on social media. [6] [7] [8]

Sathyu is one of the patrons of Indian People's Theatre Association (IPTA).

In 2014, his debut film, Garm Hava was re-released after restoration. 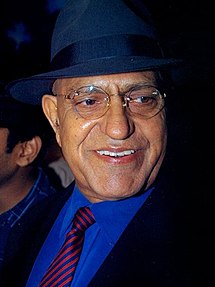 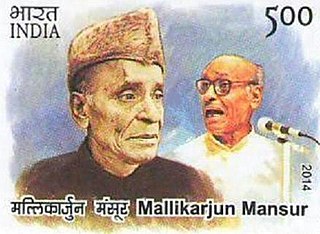 Mallikarjun Mansur was an Indian classical singer from Karnataka, an excellent vocalist in the khyal style in the Jaipur-Atrauli gharana.

Prithviraj Kapoor was an Indian actor, film producer, film director, writer and politician who started his career in the silent era of Hindi cinema. He was associated with IPTA as one of its founding members and who founded the Prithvi Theatres, a travelling theatre company based in Mumbai, in 1944. He was the patriarch of the Kapoor family of Hindi films, four generations of which, beginning with him, have played active roles in the Hindi film industry, with two generations still active in Bollywood. He's also acted in a Kannada movie Sākshatkāra. However, his father, Basheshwar Nath Kapoor, also played a short role in his movie Awara. The Government of India honoured him with the Padma Bhushan in 1969 and the Dadasaheb Phalke Award in 1971 for his contributions towards Indian cinema.

Soumitra Chatterjee was an Indian film actor, director, playwright, writer, singer and poet. He is regarded as one of the greatest and most influential actors in the history of Indian bengali cinema. He is best known for his collaborations with director Satyajit Ray, with whom he worked in fourteen films.

Bhupen Hazarika was an Indian playback singer, lyricist, musician, poet and filmmaker from Assam, widely known as Xudha kontho. His songs, written and sung mainly in the Assamese language by himself, are marked by humanity and universal brotherhood and have been translated and sung in many languages, most notably in Bengali and Hindi.

Garm Hava is a 1973 Indian drama film directed by M. S. Sathyu, with Balraj Sahni as the lead. It was written by Kaifi Azmi and Shama Zaidi, based on an unpublished short story by noted Urdu writer Ismat Chughtai. The film score was given by the classical musician Ustad Bahadur Khan, with lyrics by Kaifi Azmi, it also featured a qawwali composed and performed by Aziz Ahmed Khan Warsi and his Warsi Brothers troupe. 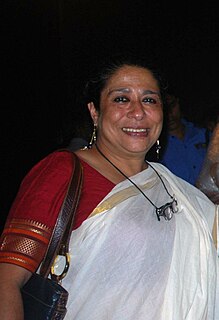 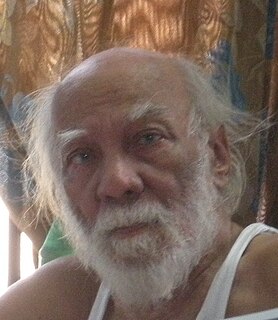 Badal Sircar, also known as Badal Sarkar, was an influential Indian dramatist and theatre director, most known for his anti-establishment plays during the Naxalite movement in the 1970s and taking theatre out of the proscenium and into public arena, when he transformed his own theatre company, Shatabdi as a third theatre group. He wrote more than fifty plays of which Ebong Indrajit, Basi Khabar, and Saari Raat are well known literary pieces. A pioneering figure in street theatre as well as in experimental and contemporary Bengali theatre with his egalitarian "Third Theatre", he prolifically wrote scripts for his Aanganmanch performances, and remains one of the most translated Indian playwrights. Though his early comedies were popular, it was his angst-ridden Ebong Indrajit that became a landmark play in Indian theatre. Today, his rise as a prominent playwright in 1960s is seen as the coming of age of Modern Indian playwriting in Bengali, just as Vijay Tendulkar did it in Marathi, Mohan Rakesh in Hindi, and Girish Karnad in Kannada. 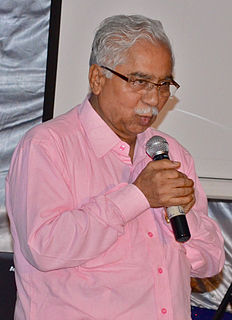 Bara is a 1982 Kannada film directed and produced by M. S. Sathyu. It is based on the story written by eminent writer U. R. Ananthamurthy. The film starred Anant Nag, C. R. Simha and Loveleen Madhu in lead roles. The film won many laurels upon release including the National Film Award for Best Feature Film in Kannada for its script of an incisive analysis of the socio-political situation in a drought affected district. The film went on floors in 1980 and made its theatrical release in 1982. The Hindi version of the film Sookha was released in 1983. However, unlike the Kannada version, the film couldn't get a theatrical release, and was shown on Doordarshan. 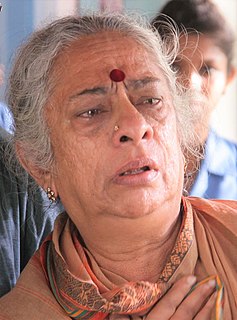 B. Jayashree is a veteran Indian theatre actress, director and singer, who has also acted in films and television and worked as dubbing artist in films. She is the creative director of Spandana Theatre, an amateur theatre company based in Bangalore, established in 1976.

Ishan Arya was an Indian cinematographer, and producer, best known as producer and cinematographer of Art cinema classic Garm Hava (1973). After working in theatre and advertising, he made his debut with Garm Hava directed by M. S. Sathyu. After that he worked largely in South Indian cinema, especially Telugu, though he work on two noted Hindi art films, Bazaar (1982) directed by Sagar Sarhadi and Anjuman (1986) directed by Muzaffar Ali. At the 23rd National Film Awards, he won the Best Cinematography Award for Telugu film, Mutyala Muggu (1975).

Sookha is a 1983 Hindi drama film directed by M. S. Sathyu, starring Anant Nag, C. R. Simha, Lovelin Madhu and Pankaj Dheer. Based on a story by eminent writer U. R. Ananthamurthy about politics of famine in Karnataka. An idealistic officers eventually succumbs to bureaucratic apathy. Famine relief arrives, but too late.