Sooni Taraporevala (born 1957) is an Indian screenwriter, photographer and filmmaker who is the screenwriter of Mississippi Masala , The Namesake and Oscar-nominated Salaam Bombay! (1988), all directed by Mira Nair. [1] She also adapted Rohinton Mistry's novel Such A Long Journey [2] (2000) wrote the films Dr. Babasaheb Ambedkar her directorial debut Little Zizou [3] as well as her latest film Yeh Ballet [4] (2020) A Netflix Original that she wrote and directed.

She directed her first feature film, based on a screenplay of her own, an ensemble piece set in Mumbai, in Spring, 2007, entitled Little Zizou . [5] [6] This film explores issues facing the Parsi community to which she belongs.

She was awarded the Padma Shri by Government of India in 2014. [8] She is a member of the Academy of Motion Picture Arts and Sciences. Her photographs are in the permanent collections of the National Gallery of Modern Art (NGMA) in Delhi and the Metropolitan Museum of Art in New York.

Taraporevala was born to a Parsi family in Mumbai in 1957. She completed her schooling from Queen Mary School, Mumbai. She received a full scholarship to attend Harvard University as an undergraduate. Though she majored in English and American Literature, she took many film courses including filmmaking taught by Alfred Guzzetti. [9] She met Mira Nair as an undergraduate, leading to their longtime creative collaboration. Next she joined the Cinema Studies Department at New York University, and after receiving her MA in Film Theory and Criticism, in 1981, she returned to India to work as a freelance still photographer. [10] [11] [12] She returned to Los Angeles in 1988 and worked as a screenwriter, writing commissioned screenplays for a wide variety of studios including Universal, HBO and Disney. She moved back to India for good in 1992 .

Taraporevala wrote the screenplays for Salaam Bombay! and Mississippi Masala , both directed by Mira Nair. Other projects with Nair include the screenplay for My Own Country , based on the book by Abraham Verghese, as well as The Namesake (2006), a cinematic adaptation of Pulitzer–winning writer Jhumpa Lahiri's novel, The Namesake . [8]

In 2020 she wrote and directed a feature film based on her documentary. The Netflix Original film Yeh Ballet produced by Siddharth Roy Kapur and Roy Kapur Films can be seen on Netflix worldwide.

In 2000, she self-published Parsis, the Zoroastrians of India: a photographic journey, 1980-2000 about the traditionally closed off community since their persecution in Persia, the first and only visual documentation of the Parsi community. [14] An updated edition was published in 2004. [15]

Her photographs have been exhibited in India, the US, France and Britain, including London's Tate Modern gallery.[ citation needed ]

She has had solo shows at the Carpenter Center for the Visual Arts at Harvard University, Chemould Prescott Road in Mumbai and the National Gallery of Modern Art (NGMA) in Delhi. Her work is in the permanent collections of the NGMA Delhi and the MET New York.

A larger version of Home in the City with 102 photographs was exhibited at Chemould Prescott Road, Mumbai, from 14 through 31 October 2017. [16] An accompanying book, Home in the city: Bombay 1977 – Mumbai 2017, was released with essays by Pico Iyer and Salman Rushdie. [17] It then traveled to the Sunaparanta, Goa Centre for the Arts in Altinho, Goa, opening there on 11 November 2017.[ citation needed ]

Rohinton Mistry is an Indian-born Canadian writer. He has been the recipient of many awards including the Neustadt International Prize for Literature in 2012. Both of his first two novels were shortlisted for the Booker Prize. His novels to date have been set in India, told from the perspective of Parsis, and explore themes of family life, poverty, discrimination, and the corrupting influence of society. 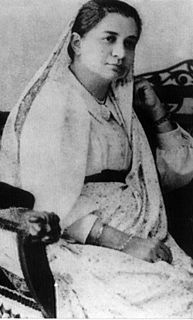 Bhikaiji Rustom Cama or simply as, Madam Cama, was one of the prominent figures in the Indian independence movement.

Mississippi Masala is a 1991 romantic drama film directed by Mira Nair, based upon a screenplay by Sooni Taraporevala, starring Denzel Washington, Sarita Choudhury, and Roshan Seth. Set primarily in rural Mississippi, the film explores interracial romance between African Americans and Indian Americans in the United States.

Such a Long Journey is a 1998 Indo-Canadian English language film based on the novel of the same name written by Rohinton Mistry. The film is directed by Sturla Gunnarsson with a screenplay by Sooni Taraporevala. The film received twelve Genie Awards nominations including the Best Picture, Best Director, and Best Actor. The film was screened at the Toronto International Film Festival. 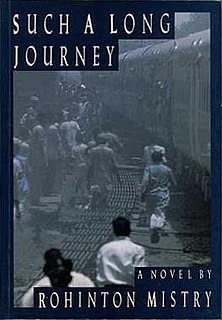 Such a Long Journey is a 1991 novel by Rohinton Mistry. It was shortlisted for the Booker Prize and won several other awards. In 2010 the book made headlines when it was withdrawn from the University of Mumbai's English syllabus after complaints from the Maharashtrian politician Aditya Thackeray.

The Indian Film Festival of Los Angeles(IFFLA) is an annual film festival held in Los Angeles, California. Established by Christina Marouda in 2003, as a nonprofit organization devoted to paving the way for a greater appreciation of Indian cinema and diverse culture by providing the public with a selection of films from and about the Indian diaspora by Indian and international filmmakers.

Chor Bazaar is one of the largest flea markets in India, located near Bhendi Bazaar in Grant Road, South Mumbai,. The area is one of the tourist attractions of Mumbai. The word chor means thief in Marathi and Hindi. According to popular legend, if you lose anything in Mumbai you can buy it back from the "Chor Bazaar".

Anu Aga is an Indian billionaire businesswoman and social worker who led Thermax, an energy and environment engineering business, as its chairperson from 1996 to 2004. She was among the eight richest Indian women, and in 2007 was part of 40 Richest Indians by net worth according to Forbes magazine. She was awarded with the Mumbai Women of the Decade Achievers Award by ALL Ladies League, the all ladies wing of ASSOCHAM. 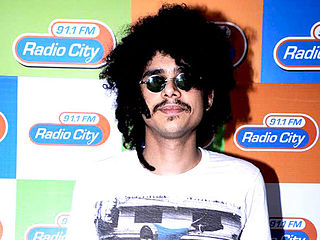 Imaad Shah, born Imaaduddin Shah, is an Indian actor and musician. He is the son of the actors Naseeruddin Shah and Ratna Pathak Shah. His maternal grandmother was the actress Dina Pathak. He is also a theatre actor and works with the theatre company Motley, founded by Naseeruddin Shah and Benjamin Gilani. He has been a part of many productions including Katha Collage, Waiting for Godot, By George and Manto Ismat Haazir Hain, apart from working with other groups.

Shernaz Patel is an Indian film and theatre actor, who works in Hindi and English films, most known for her roles in films like Black (2005) and Guzaarish (2010) and English language theatre in Mumbai. She made her theatre debut with The Diary Of Anne Frank in 1984. Since then, she has acted in several noted productions in Mumbai-based English theatre, and formed RAGE theatre group in Mumbai, with Rahul da Cunha and Rajit Kapur in 1993. She has also given voice to the character of Yashoda in the TV series Little Krishna.

Cyrus Mistry is an Indian author and playwright. He won the 2014 DSC Prize for South Asian Literature for Chronicle of a Corpse Bearer. He is the brother of author Rohinton Mistry.

Parsi theatre is a generic term for an influential theatre tradition, staged by Parsis, and theatre companies largely-owned by the Parsi business community, which flourished between 1850 and 1930s. Plays were primarily in the Hindustani language, as well as Gujarati to an extent. After its beginning in Bombay, it soon developed into various travelling theatre companies, which toured across India, especially north and western India, popularizing proscenium-style theatre in regional languages.

Jim Sarbh is an Indian film and stage actor. Best known for his supporting work in the Hindi films, he is the recipient of a Screen Award, an International Indian Film Academy Award and two Filmfare Award nominations. Additionally, Sarbh has directed and acted in numerous theatre productions in India.

Yeh Ballet is a Netflix Original Film written and directed by Sooni Taraporevala and produced by Siddharth Roy Kapur. The film features two newcomers—Achintya Bose as Amiruddin Shah, and Manish Chauhan portraying Nishu, as the leads. The film also stars Julian Sands, Jim Sarbh, Danish Husain, Vijay Maurya, Heeba Shah, and Kalyanee Mulay. The film is streaming now on Netflix. The film is a fictionalized version of a short documentary by Taraporevala by the same name.

Perin Bharucha Chandra was an Indian author, communist, freedom fighter and peace activist. She played an integral role in promoting peace and peaceful conflict resolution throughout the Cold War era. She was born in Chaman, Balochistan to a Parsi family. Her father was Lt. Colonel Phiroze Byramji Bharucha, a British Indian Army Doctor and later Surgeon General of Lahore. A believer in Scientific Socialism, she married Romesh Chandra, a former chairman of the World Peace Council. Her son, Pheroze, is a journalist and her daughter-in-law, Chandita Mukherjee is a documentary filmmaker and activist.