Bhalchandra Dattatray Mondhe (born 15 March 1944) is an Indian artist, photographer, sculptor and painter from Madhya Pradesh. [1] In 2016, the President of India bestowed upon him the Padma Shri award for his lifetime work in photography. He has authored two books, including Birds of Sirpur, which he co-authored. Mondhe co-founded The Nature Volunteers Club, and along with two other co-founders, is credited with reviving the Sirpur Lake. [2]

Mondhe first encountered photography when he was 17. He subsequently became passionate about photography during his youth. [1] In a 2016 feature on him by the Hindustan Times , Mondhe said that he used the camera to encapsulate his vision, adding, "I have never considered the camera and the lens as a burden to carry, but as my extension". [1] Mondhe went on to graduate from the Düsseldorf Academy of Fine Arts in Germany. [1]

Mondhe also developed an interest in sculpting, with the Nehru Centre hosting his exhibition in October 1993. [3] The magazine India Today described his work as "unconventional", mentioning: "Indore-based Bhalu Mondhe uses anything that is handy – any material and any colour, sometimes brush and sometimes fingers – for what he calls 'playing with the material like a child'. The outcome is an unrestricted interplay of different kinds of material". [3]

Mondhe's exhibition titled 50 Years of Rare Art Journey was also featured at Rangdarshini Gallery, Bharat Bhavan, in Bhopal. [4] The exhibition featured a montage showcasing 50 years of Mondhe's art creations, including 90 pieces of sculptures, images, drawings and paintings. [4] The Pioneer, covering Modhe's exhibition, described his work as having a "high vision of creativity", mentioning that Mondhe "is an artist with a difference. He paints, clicks realistic photographs, molds the sculptures of his imagination and draws his ideologies on a plain paper. The way he expresses his imagination to the spectators is commendable". [4]

During the 1990s, Mondhe used to regularly visit the Sirpur lake during the mornings to take photographs. [5] On one such occasion, he had a significant argument with a group of slum dwellers who were chopping down a tree. [5] Soon after, in his effort to protect the lake and neighboring region, Mondhe co-founded The Nature Volunteers Club with ornithologist Kaustubh Rishi and journalist Abhilash Khandekar. [5] This group of three worked towards restoring the lake's condition by patrolling the lake regularly, increasing awareness within the society about the lake, investing considerable amounts of their money, communicating with and convincing bureaucrats and politicians, apart from involving institutions like the Bombay Natural History Society and noted individuals like Sunita Narain (Centre for Science and Environment). [5] Subsequently, due to the efforts of Mondhe and his colleagues, the Madhya Pradesh government got involved and improved the infrastructure supporting the lake, apart from fencing off the lake and surrounding region. All this resulted in the Sirpur lake finally becoming a protected water body that could securely host resident and migratory birds. [5]

Business Standard , in an article covering the environmental work of Mondhe and his colleagues, recognized their "remarkably successful effort" in saving and reviving the lake, additionally noting that "in two decades of effort, they have been able to win the support of the larger citizenry and also officialdom, without which such a battle could not have been won". [5]

Mondhe and his colleagues decided to document their efforts to save the lake in the book titled Birds of Sirpur, which Mondhe co-authored. [5] Sunita Narain launched the book in October 2012. The book covers details of migratory and resident birds based around the lake, and documents 130 bird species with photographs. [2] In all, Mondhe has authored two books covering birds. [2]

Bhalu Mondhe received Padma Shri in January 2016, one of India's highest civilian honours. [1] [6] The award was given for his significant work over the years in the field of photography. [6] The President of India, Pranab Mukherjee, presented the award to him on 28 March 2016, at a ceremony held at Rashtrapati Bhavan, the presidential house. [7] [8]

Pranab Kumar Mukherjee was an Indian politician who served as the 13th President of India from 2012 until 2017. In a political career spanning five decades, Mukherjee was a senior leader in the Indian National Congress and occupied several ministerial portfolios in the Government of India. Prior to his election as President, Mukherjee was Union Finance Minister from 2009 to 2012. He was awarded India's highest civilian honour, the Bharat Ratna, in 2019, by the President of India, Ram Nath Kovind. 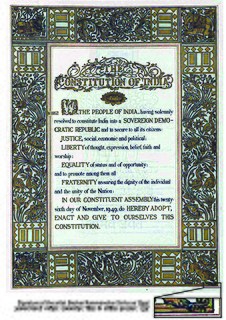 Republic Day is a national holiday in India. It honours the date on which the Constitution of India came into effect on 26 January 1950 replacing the Government of India Act (1935) as the governing document of India and thus, turning the nation into a newly formed republic.

Sankar Kumar Pal is a computer scientist and former Director of the Indian Statistical Institute, Kolkata. He is a computer scientist with an international reputation on fuzzy neural network, soft computing, and machine intelligence. He founded the Machine Intelligence Unit in 1993, and the Center for Soft Computing Research: A National Facility in 2004, both at the ISI. He is the founder President of the Indian National Academy of Engineering, Kolkata Chapter.

Allu Aravind is an Indian film producer and distributor in Tollywood. He produces films under his production banner Geetha Arts. He is one of co-owners of the Indian Super League club Kerala Blasters FC. 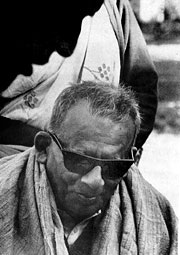 Anil Kumar Agarwal was an Indian environmentalist, trained as a mechanical engineer at IIT Kanpur, worked as a science correspondent for the Hindustan Times. He was the founder of the Centre for Science and Environment, a Delhi-based research institute currently led by Sunita Narain.

Bal Ram Nanda was a writer from New Delhi, India. He was the preeminent Indian biographer of Mahatma Gandhi.

Balbir Singh Seechewal is a Nirmala Sikh who spearheaded an anti-river pollution campaign in Punjab, India. By combining his assiduously cultivated self-help philosophy with the environmental essence of the Gurbani, he has resurrected the 110-miles long Kali Bein rivulet. He received Indian civilian award Padmashri in 2017. He is also known as Eco Baba. 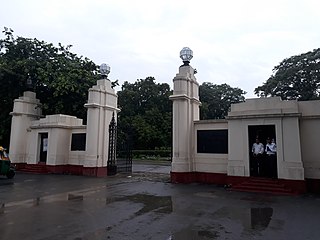 The Nehru Memorial Museum & Library (NMML) is a museum and library in New Delhi, India, which aims to preserve and reconstruct the history of the Indian independence movement. Housed within the Teen Murti House complex, it is an autonomous institution under the Indian Ministry of Culture, and was founded in 1964 after the death of India's first prime minister, Jawaharlal Nehru. It aims to foster academic research on modern and contemporary history. Today, the Nehru Memorial Library is the world’s leading resource centre on India’s first prime minister. Its archives contain the bulk of Mahatma Gandhi's writings, as well as private papers of C. Rajagopalachari, B. C. Roy, Jayaprakash Narayan, Charan Singh, Sarojini Naidu and Rajkumari Amrit Kaur. In March 2010 it launched a digitization project of its archives, and by June 2011, 867,000 pages of manuscripts and 29,807 photographs had been scanned and 500,000 pages had been uploaded on the digital library website. Amongst noted publications of the NMML are Selected Works of Jawaharlal Nehru, Man of Destiny by Ruskin Bond, Nehru Anthology (1980) and Nehru Anthology. 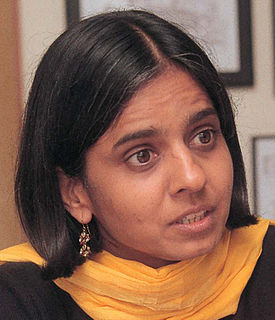 Sunita Narain is an Indian environmentalist and political activist as well as a major proponent of the Green concept of sustainable development. Narain is director general of the India-based research institute the Centre for Science and Environment, director of the Society for Environmental Communications, and editor of the fortnightly magazine, Down To Earth.

Sunil Janah was an Indian photojournalist and documentary photographer who worked in India in the 1940s. Sunil Janah is internationally acclaimed for documenting India's independence movement, its peasant and labour movements, famines and riots, rural and tribal life, as well as the years of rapid urbanization and industrialization. Noted for the beauty and technical quality of his compositions, Sunil Janah's photographs are significant in their historical content as well as their emotional connect. He was best known for his coverage of the Bengal famine of 1943. The Government of India awarded him the civilian honour of Padma Shri in 2012.

Radha Kumud Mukherjee, was an Indian historian and a noted Indian nationalist during the period of British colonial rule. He was the brother of the sociologist Radhakamal Mukerjee.

Waman Thakre is an Indian photographer and a former deputy director at the Directorate of Panchayat and Social Service of the Government of Madhya Pradesh. He is a Fellow of the Royal Photographic Society and the Photographic Society of America and is a recipient of the Shikhar Award of the MP State government. The Government of India awarded him the fourth highest civilian honour of the Padma Shri, in 2007, for his contributions to Arts.

Padmanabha Pillai Gopinathan Nair is an Indian social worker, Gandhian, independence activist and the chairman of Mahatma Gandhi National Memorial Trust, popularly known as Gandhi Smarak Nidhi, a trust managed by the Government of India. He participated in the Quit India movement of 1942 and worked alongside Vinoba Bhave to promote Bhoodan and Gramdan movements. He is the initiator of the camp movement, a student program, as a part of the Construction Movement of Mahatma Gandhi. He is a recipient of the Jamnalal Bajaj Award, among other honors. The Government of India awarded him the fourth highest civilian honour of the Padma Shri, in 2016, for his contributions to society.

Girish Bharadwaj is an Indian social worker often referred to as Sethu Bandhu and Bridgeman of India for building around 127 bridges in remote villages across India. He was conferred the Padma Shri award in 2017.

Sirpur Lake is located on Indore-Dhar Road in Indore. The total area of the lake and its surrounding protected region is 800 acres and falls under the jurisdiction of the Indore Municipal Corporation.