Sudarsan Pattnaik (born 15 April 1977) is an Indian Sand Artist from Puri, Odisha. In 2014, Government of India honoured him with the Padma Shri, India's fourth-highest civilian award, for his amazing and wonderful sea shore sand arts. [3]

Sudarsan Pattnaik was born in a poor family in Marchikote Lane, Puri district, Odisha, in 1977. Sudarshan Pattnaik was creative from very young age. In February 2017, he broke the Guinness world record for making world's largest sand castle in Puri beach, Odisha [4] which was then broken by Skulptura Projects GmbH in Binz, Germany in June 2019. [5]

He has also bagged various national award like National Youth Award (2004–05), National Tourism Award (2005–06), People of the Year Award by Limca Book in 2009 and Young Indian Leadership Award by CNN IBN in 2010; He has been felicitated by Her Excellency President of India Smt. Pratibha Devi Singh Patil during her visit to Puri. His art performance was also appreciated by honorable dignitaries, such as the President of India, the Prime minister of India, Speaker of Lok Sabha and the Governor of State. He also got Honorary Doctorate from Berhampur University, Odisha in 2012, following by this year he set a Guinness World Record for creating World's Tallest Sand Castle. In 2014 he was honoured Padma Shri By Govt of India.

Apart from these, he is creating social awareness in national and international arena on world peace, global warming, terrorism, HIV AIDS, to save endangered wildlife species through his sand art for which he is always covered in global media. His works on the promotion of Indian Tourism in Global Forum through his talent of art in different countries like Belgium, United States, the Netherlands, London etc. is highly recommendable.

Sand art is the practice of modelling sand into an artistic form, such as a sand brushing, sand sculpture, sandpainting, or sand bottles. A sandcastle is a type of sand sculpture resembling a miniature building, often a castle. The drip castle variation uses wet sand that is dribbled down to form organic shapes before the sands dries. 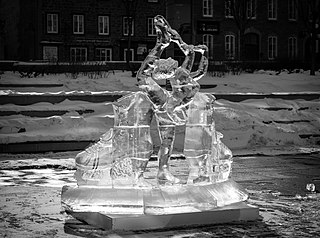 Ice sculpture is a form of sculpture that uses ice as the raw material. Sculptures from ice can be abstract or realistic and can be functional or purely decorative. Ice sculptures are generally associated with special or extravagant events because of their limited lifetime. 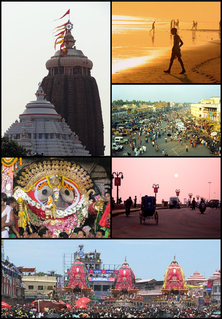 Puri is a coastal city and a municipality in the state of Odisha in eastern India. It is the district headquarters of Puri district and is situated on the Bay of Bengal, 60 kilometres (37 mi) south of the state capital of Bhubaneswar. It is also known as Sri Jagannatha Dhama after the 12th-century Jagannath Temple located in the city. It is one of the original Char Dham pilgrimage sites for Hindus.

Konark is a medium town in the Puri district in the state of Odisha, India. It lies on the coast by the Bay of Bengal, 60 kilometres from the capital of the state, Bhubaneswar. It is the site of the 13th-century Sun Temple, also known as the Black Pagoda, built in black granite during the reign of Narasimhadeva-I. The temple is a World Heritage Site. The temple is now mostly in ruins, and a collection of its sculptures is housed in the Sun Temple Museum, which is run by the Archaeological Survey of India. 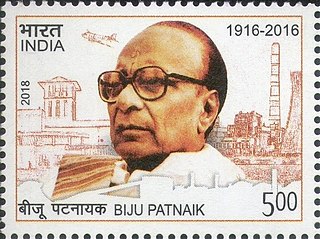 Bijayananda Patnaik, popularly known as Biju Patnaik, was an Indian politician, aviator and businessman. As politician, he served twice as the Chief Minister of the State of Odisha.

Justice Gopal Ballav Pattanaik is an Indian lawyer and later a jurist who served over a period of 19 years in the bench of the Odisha High Court as a permanent Judge, as Chief Justice of the Patna High Court, Judge of the Supreme Court of India and as the 32nd Chief Justice of India.

Puri Beach or the Golden beach is a beach in the city of Puri in the state of Odisha, India. It is on the shore of the Bay of Bengal. It is known for being a tourist attraction and a Hindu sacred place. The beach is the site of the annual Puri Beach Festival, which is co-sponsored by the Indian Ministry of Tourism, the city of Odisha, the Development Commissioner of Handicrafts, and the Eastern Zonal Cultural Center, Kolkata. The beach hosts sand art displays, including work by international award-winning local sand artist Sudarshan Pattnaik. The Golden Beach at Puri was awarded the prestigious 'Blue Flag' tag on October 11, 2020 by the Foundation for Environment Education (FEE), Denmark.

Sand festivals or festivals of sand sculpture are exhibitions of sculptures made of sand carried out in various places around the world. These events usually include a competition. 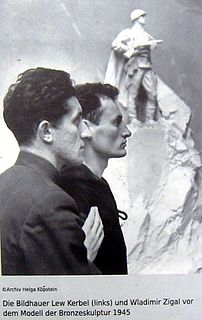 Neeraj Gupta is an Indian sculptor. He took second prize in the sculpture section of the Florence Biennale in 2017, one of over a hundred winners in eleven sections. Gupta became the first Indian artist to win Florence Biennale Award. In 2018 he was one of the two hundred artists accepted to exhibit at the annual NordArt exhibition in the Carlshütte of Büdelsdorf, in Schleswig-Holstein in northern Germany. Keshav Malik was his guru. 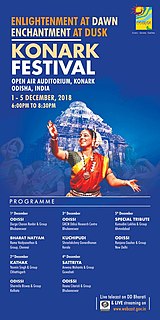 Konark Dance Festival is a five-day dance festival held every year in the month of December mostly from 1 to 5 in backdrop of the Sun temple in Konark, Odisha in India. It is one of the biggest dance festivals held in Odisha.

Shahar Marcus is an Israeli artist who works primarily in video, performance and installations.

Sergei Enwerowitsch Tchoban is a Russian and German Architect working in various cities in Europe and the Russian Federation. He is a member of the Association of German Architects (BDA), the Union of Architects of Russia and the Union of Artists of Russia, academician of the Moscow branch of the International Academy of Architecture and honorary academician of the Russian Academy of Arts, the recipient of architectural awards and a participant in various architectural exhibitions.

Andrius Petkus is a Lithuanian sculptor from Palanga, a pioneer and promoter of sand sculpture in Lithuania. He established the sand sculpture park / museum in Palanga. He also works in other medias, create Conceptual Sculptures. He is a winner of some Ice Sculpture Contests.

Pathani Pattnaik was an Indian writer of Odia language. He won the Sahitya Akademi Award in 2010 for his autobiography Jibanara Chalapathe.