Nila Madhab Panda (born 18 October 1973) is an Indian film producer and director. Panda has produced and directed over 70 films, documentaries and shorts [1] based on social issues such as climate change, child labor, education, water issues, sanitation and many other developmental issues in India. Most of his films draw inspiration from his own life, having won several awards and critical acclaim for his films which have been received as entertaining yet socially relevant. [2] [3]

His first feature film “I Am Kalam” became an iconic film winning 34 international awards along with a national award. [5] [6] His second feature film “Jalpari” (desert mermaid) received the MIP Junior award at Cannes. [7] He continued making path breaking films like “Babloo Happy Hai (babloo is happy), “Kaun Kitney Paani Mein (in troubled water). His project “Kadvi Hawa (Dark wind)”, was highly rated and critically acclaimed globally and received a national award. [8] [9] This is one of the first films that brought climate change into Indian cinema. His feature-length documentary “God’s own people” narrated by Amitabh Bachhan connects between people's faith with tree and God. “Halkaa (relief) was his production - a musical film with children. The film narrates a story about the “Swachhata Abhiyaan” [Clean India Mission] and the importance of sanitation. This film has won Best Film at the Grand Prix in Poland [10] In Feb 2021, Panda announced that his First Odia language film 'Kalira Atita' had been submitted to the Oscars 2021 in the General Category and was available for Academy Screening. [11] However, The film did not make the cut for Oscar Nominations. [12]

Panda hails from Dasharajpur Village, in Subarnapur District of Western Odisha, the youngest of five siblings. Education in a rural Indian Village meant a school with no building, walking 4-9 km daily. In 1995, after failing to Graduate, Panda left Delhi and landed the job of a camera attendant. There he learnt the intricacies of filmmaking. He is stated to have studied Entrepreneurship at IIM Bangalore.[ citation needed ]

Other awards and recognition

Subarnapur District, also called Sonepur District or Sonapur District, is an administrative district in western Odisha state in eastern India. The town of Sonepur is the district headquarters. Sonepur has a rich cultural heritage and is known as the Mandiramalini town of Odisha with more than hundred temples. The people of the Sonepur region are referred to as Sonepuria.

Pratibha Ray is an Indian academic and writer of Odia-language novels and stories. For her contribution to the Indian literature, Ray received the Jnanpith Award in 2011.

Anu Choudhury is a leading Indian actress. She has starred in more than 65 films. Her debut Odia film was Maa Goja Bayani.

I Am Kalam is a 2011 Indian Hindi-language drama film produced by the non-governmental charity Smile Foundation and directed by Nila Madhab Panda, cinematography by Mohana Krishna. The character of Chhotu has been performed by Harsh Mayar. The film was screened in the market section at the 63rd Cannes Film Festival on 12 May 2010. It has been showcased in various film festivals and has received many awards and honours. The film was screened retrospective on 17 August 2016 at the Independence Day Film Festival jointly presented by the Indian Directorate of Film Festivals and Ministry of Defense, commemorating 70th Indian Independence Day.

Pitobash Tripathy, also known simply as Pitobash, is an Indian film actor who works in Bollywood films. He is known for his role in the movies I Am Kalam, Begum Jaan, Shor in the City, Mom and the Hollywood film Million Dollar Arm.

Jalpari: The Desert Mermaid is a 2012 Indian film directed by Nila Madhab Panda. Like I Am Kalam it is also a children's film where Lehar Khan, Krishang Trivedi and Harsh Mayar are on lead as child artists and Parvin Dabas, Tannishtha Chatterjee, Rahul Singh, Suhasini Mulay and V.M. Badola are in supporting roles.

Harsh Mayar is an Indian film actor working in Hindi Bollywood films. He won the National Film Award for Best Child Artist for his work in 2011 film I Am Kalam. 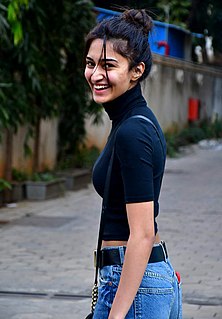 Erica Jennifer Fernandes is an Indian actress and model. She is known for her portrayal of Dr. Sonakshi Bose in Kuch Rang Pyar Ke Aise Bhi and Prerna Sharma in Kasautii Zindagii Kay.

Babloo Happy Hai is a 2014 Indian Hindi-language film directed by Nila Madhab Panda, who earlier directed I am Kalam and Jalpari. It is a love story of today's youngsters, and what they think love and sex are in the times of multiplexes and fast cars. The film features Sahil Anand, Erica Fernandes, Sumit Suri, Amol Parashar, Preet Kamal, Anu Choudhury, Reyhna Malhotra and Parvin Dabas in pivotal roles. The film's name was originally Love is not mathematics. The film released on 7 February 2014, along with three other Bollywood films - Hasee Toh Phasee, Heartless and Ya Rab.

Sniti Mishra is a trained vocalist in Hindusthani classical music who appeared for the first time in Zee TV musical reality show, Sa Re Ga Ma Pa Singing Superstar. She had been associated with Indo-Swedish Fusion jazz band Mynta. She has also worked with the percussionist Sivamani and Grammy Award- nominated jazz musician-keyboardist Louis Banks. She has performed classical and fusion concerts in India and worldwide. She was honored with 'Baji Rout Samman' for the year 2016 by Utkala Cultural Association, IIT Bombay.Sniti has her formal education in Economics and pursued her MBA.

Jitendra Mishra is an Indian film producer and promoter, born in Titlagarh, Odisha. He is known for The Last Color, Desires of the Heart and Human OAK an Indo-Italian film co-produced during Covid-19 lockdown.

Saswat Joshi is an Indian classical dancer, choreographer, model and an exponent of the Odissi dancing style.

The Smile International Film Festival for Children & Youth (SIFFCY) is an annual film festival organised in the city of New Delhi, India, by Smile Foundation.

Akshay Kumar Parija is an Indian film maker known for his depictions of Odia culture and Odissi dance in his films. Originally a banker, he currently lives in Dubai.

Sumit Suri is a Bollywood Actor born on 14th Dec and brought up in Rishikesh. After acted in about 30-40 TV Commercials, he made his debut in Feature Films as one of the leads in Eros International Gurmmeet Singh (Mirzapur) directed Warning. Later seen in films as one of the leads in Viacom18's What the Fish, Babloo Happy Hai directed by Nila Madhab Panda, Surkhaab and A Billion Colour Story.

Kadvi Hawa is a 2017 Indian Hindi-language drama film, directed by Nila Madhab Panda and produced by Panda, Drishyam Films and Akshay Parija. Based on the theme of climate change, the film stars Sanjay Mishra, Ranvir Shorey and Tillotama Shome in lead roles. It was released on 24 November 2017. It also got a Special Mention at the 64th National Film Awards held on 7 April 2017. The film is presented by Drishyam Films. 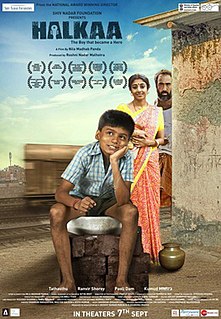 Halkaa is a 2018 Indian Hindi-language family film directed by PadmaShri Nila Madhab Panda starring Ranvir Shorey & Paoli Dam. The movie was released on 7 September 2018. A trailer was released on 7 August 2018

Biju Babu is a 2019 Indian Odia-language film written and directed by Vishal Mourya and Devi Prashad Lenka and produced by Nila Madhab Panda. It stars Anubhav Mohanty in the lead role. It is the first Odia film produced by Panda.