Ustad Amjad Ali Khan (born 9 October 1945) is an Indian classical sarod player, best known for his clear and fast ekhara taans. Khan was born into a classical musical family and has performed internationally since the 1960s. He was awarded India's second highest civilian honour Padma Vibhushan in 2001.

Khan first performed in the United States in 1963 and continued into the 2000s, with his sons. [1] [3] He has experimented with modifications to his instrument throughout his career. [4] Khan played with the Hong Kong Philharmonic Orchestra and worked as a visiting professor at the University of New Mexico. [2] In 2011, he performed on Carrie Newcomer's album Everything is Everywhere. In 2014, along with his two sons, Ayaan Ali Khan and Amaan Ali Khan, he performed [5] 'Raga For Peace' in 2014 Nobel Peace Prize Concert.

Born on 9 October 1945 as Masoom Ali Khan, the youngest of seven children, to Gwalior court musician Hafiz Ali Khan and Rahat Jahan. [1] [2] His family is part of the Bangash lineage and Khan is in the sixth generation of musicians; his family claims to have invented the sarod . [2] [4] [12] His personal name was changed by a sadhu to Amjad. [1] Khan received homeschooling and studied music under his father. [1] In 1957, a cultural organization in Delhi appointed Hafiz Ali Khan as its guest and the family moved to Delhi. [1] Hafiz Ali Khan received training from the descendants of Tansen, the magical musician, was one of the 'Nav-ratna' ( nine gems) at the court of the Mughal Emperor Akbar. Thus, Amjad belongs to the lineage of Tansen. [13] Friends of Hafiz Ali Khan convinced him of the importance of formal schooling for his son; as a result, Amjad was taken to meet the Principal of Modern School in New Delhi and admitted there as a day scholar. He attended Modern School from 1958 to 1963. [14]

As a young bachelor, Amjad had an affair with an older woman, who was a divorcée and a mother. The affair lasted eight years (1967–75), but the lady did not wish to marry him. Amjad's family disapproved of the relationship from the very beginning, and in the early 1970s, as his father's health deteriorated, they convinced him to let go of this relationship and marry a girl chosen by them. Amjad finally agreed to their wishes around the time of his father's death in 1972. However, although his wife came from similar background and was the same age as he, Amjad did not bond with her. On the other hand, he kept in touch with his previous lover and maintained a platonic friendship with her, which was not acceptable to his wife. Hardly a year after their wedding, Amjad and his wife had a daughter. However, the marriage broke down completely around the time of the birth of the child. The process of separation and divorce was painful for the couple and to their families. An unexpected outcome of the divorce was that, Amjad overcame his attachment to the divorced woman, due to differences in their thinking and mindset and this gave him a clearer understanding of his cultural moorings and priorities. He came out of the relationship with the divorced woman in 1975, and divorced his wife the same year. The daughter born of his first marriage was raised by Amjad's brother, Rehmat Ali Khan, who was childless.

The following year, on 25 September 1976, Khan got married a second time. His bride was Bharatanatyam dancer Subhalakshmi Barooah, hailing from Assam in north-eastern India. [2] [1] [15] They have two sons, Amaan and Ayaan, both of whom are performing artists trained in music by their father. [1] [16]

Khan cared for his diabetic father until he died in 1972. [1] Their family home in Gwalior was made into a musical center and they live in New Delhi. [17] 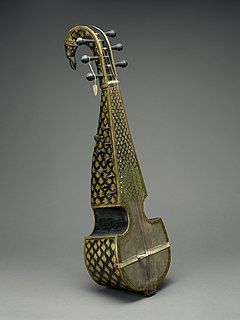 The Sarod is a stringed instrument, used mainly in Hindustani music on the Indian subcontinent. Along with the sitar, it is among the most popular and prominent instruments. It is known for a deep, weighty, introspective sound, in contrast with the sweet, overtone-rich texture of the sitar, with sympathetic strings that give it a resonant, reverberant quality. A fretless instrument, it can produce the continuous slides between notes known as meend (glissandi), which are important in Indian music. 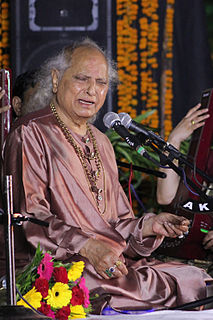 Allauddin Khan, also known as Baba Allauddin Khan was an Indian sarod player and multi-instrumentalist, composer and one of the most notable music teachers of the 20th century in Indian classical music.

Hafiz Ali Khan (1888–1972) was an Indian sarod player. A fifth-generation descendant of the Bangash gharana of sarod players, Hafiz Ali was known for the lyrical beauty of his music and the crystal-clear tone of his strokes. The occasional critic has, however, observed that Khan's imagination was often closer to the semi-classical thumri idiom than the austere dhrupad style prevalent in his times. He was a recipient of the civilian honour, the Padma Bhushan Award, in 1960.

Amaan Ali Khan is an Indian classical musician who plays the sarod. Khan is the son of Ustad Amjad Ali Khan and often performs with his younger brother Ayaan Ali Khan, with whom he hosted the music talent show Sa Re Ga Ma.

Ayaan Ali Bangash is an Indian classical musician who plays the sarod. Khan is the son of Amjad Ali Khan and often performs with his older brother Amaan Ali Khan, with whom he hosted the music talent show Sa Re Ga Ma. He has also released solo albums and collaborations with brother and father.

Pandit Biswajit Roy Chowdhury is a Hindustani classical musician and a renowned sarod player from India.

Ustad Bismillah Khan Yuva Puraskar is an award given by the Sangeet Natak Akademi to outstanding artists under 40 who have demonstrated talent in the fields of music, dance and Theatre. Every year 32 artists are selected. Award winners receive a prize of Rs 25000 (US$350) from the chairman of Sangeet Natak Akademi in a special ceremony.