Dr. Bhupen Hazarika was an Indian playback singer, lyricist, musician, poet and filmmaker from Assam, widely known as Xudha kontho from the indigenous ethnic Kaibarta community of Assam. His songs, written and sung mainly in the Assamese language by himself, are marked by humanity and universal brotherhood and have been translated and sung in many languages, most notably in Bengali and Hindi. His songs, based on the themes of communal amity, universal justice and empathy, are especially popular among the people of Assam (India), West Bengal and Bangladesh. He is also acknowledged to have introduced the culture and folk music of Assam and Northeast India to Hindi cinema at the national level. He received the National Film Award for Best Music Direction in 1975, the Sangeet Natak Akademi Award (1987), Padmashri (1977), and Padmabhushan (2001), Dada Saheb Phalke Award (1992), the highest award for cinema in India and Sangeet Natak Akademi Fellowship (2008), the highest award of the Sangeet Natak Akademi. He was posthumously awarded both the Padma Vibhushan, India's second-highest civilian award, in 2012, and the Bharat Ratna, India's highest civilian award, in 2019. Hazarika also held the position of the Chairman of the Sangeet Natak Akademi from December 1998 to December 2003.

Assamese cinema, also known as Jollywood, is the cinema industry in the Assamese language, watched primarily in Assam, India. The industry was born in 1935 when Jyoti Prasad Agarwala released his movie Joymoti. Since then the Assamese cinema has developed a slow-paced, sensitive style, especially with the movies of Bhabendra Nath Saikia and Jahnu Barua. The industry is called Jollywood, named for Agarwala's Jyoti Chitraban Film Studio.

Tara is an Indian film actress, who has worked in Assamese, Manipuri, Punjabi and Hindi films in a career extending more than 50 years. Her prominent features include Halodhia Choraye Baodhan Khai, which won the National Film Award for Best Feature Film in 1988, Banaras - A Mystic Love Story, and Shakuntala, directed by Bhupen Hazarika. She died 19 May 2007 in Gauhati, Assam. 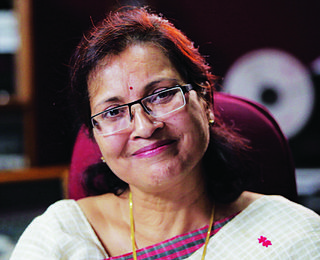 Moloya Goswami is an Indian actress who works in Assamese cinema. In the 39th National Film Awards 1992, she won the Best Actress award for her performance in the Firingoti.

Pratima Barua Pandey was an Indian folk singer from the royal family of Gauripur in Western Assam's Dhubri district. Barua Pandey, a national awardee, best known for her Goalpariya songs Hastir Kanya and Mur Mahut Bandhure, was the daughter of Prakritish Chandra Barua (Lalji) and niece of filmmaker Pramathesh Barua of Devdas fame.

Halodhia Choraye Baodhan Khai is a 1987 Assamese film of social genre made by director Jahnu Barua. It won the National Film Award for Best Feature Film in 1988 and multiple awards at the Locarno International Film Festival in 1988. It was the third full-length feature film made by Barua.

Sailadhar Baruah was an eminent film producer from Assam, India. He is best remembered for his visionary contribution to Assamese Cinema as the producer of some of the greatest Assamese movies ever made, such as Halodhia Choraye Baodhan Khai and Xagoroloi Bohudoor.

Tora is an Assamese language children's film directed by Jahnu Barua and produced by the Children's Film Society, India. The film was released in 2004. The film received the Best Children's Film award in the 51st National Film Awards for the year 2003.

Konikar Ramdhenu is a 2003 Indian Assamese language film directed by Jahnu Barua. It was released in 2003. The film was shown in Indian Panorama section of IFFI during October 2002 in Delhi and Mumbai International Festival in 2003. It is the last instalment of his trilogy, the other two being Xagoroloi Bohu Door (1995) and Pokhi (1998). Konikar Ramdhenu depicts the horrors that happen in a juvenile home. 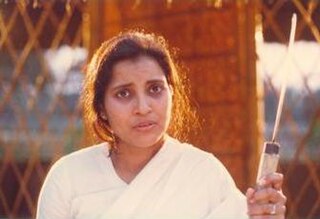 Firingoti is a 1992 Indian Assamese language film directed by Jahnu Barua. The film was released in 1992.

Pokhi is an Assamese language drama film directed by Jahnu Barua. It was released in 1998 as is the second instalment of his trilogy — the other two being Xagoroloi Bohu Door (1995) and Konikar Ramdhenu (2003). Pokhi won a National Award for Best Feature Film in the Assamese Category in 2000.

The 35th National Film Awards, presented by Directorate of Film Festivals, the organisation set up by Ministry of Information and Broadcasting, India to felicitate the best of Indian Cinema released in the year 1987. Ceremony took place in April 1988 and awards were given by then President of India, R. Venkataraman.

Ajeyo is a 2014 Assamese language drama film directed by Jahnu Barua; based on the Sahitya Akademi Award winner 1997 Assamese novel Ashirbador Rong written by Arun Sharma and adapted as screenplay by the director himself. It was produced by Shankar Lall Goenka and stars Rupam Chetia and Jupitora Bhuyan in the lead roles. The film was released on 3 January 2014.

Dhrubajyoti Phukan is a National Film Award winning musician who has worked as a Music Producer, Music Arranger and Music Programmer in Hindi Films. Widely known as DJ Phukan, he has also worked as a music director for several films.

Eli Ahmed is an Indian writer, scriptwriter, director, lyricist, costume designer, actress and social activist. She is also the editor, publisher and proprietor of ‘Orani’, the women's magazine. It is the only women's magazine in the Northeast since 1970. She had also organised the first women's drama group in Assam in 1967. She was awarded the Padma Shri by the Government of India in 2017 for her contribution to literature and education.

The Guwahati International Film Festival (GIFF) is an annual film festival held in Guwahati, Assam, India.The State Government-owned Jyoti Chitraban Society organised the festival in association with the Dr. Bhupen Hazarika Regional Government Film and Television Institute. The first ever Guwahati International Film Festival (GIFF) to be held in northeast India, which will be inaugurated on 28 October 2017 by Assam Chief Minister Sarbananda Sonowal. The Assam government supported festival began on 28 October with screening of the Oscar winning ‘The Salesman’, directed by Asghar Farhadi and produced by a joint collaboration of Iran and France.

Rima Das is an Indian filmmaker. She is known for her film, Village Rockstars (2017), which won several national and international awards. The film—written, directed, edited, and produced by Das—was India's official entry for the 90th Academy Awards in the Best Foreign Language Film category. The film, chosen out of 28 other entries in India, is also the first Assamese film to be submitted for Oscar consideration. She won India's National Award for Best Film and Best Editor.

Bishnu Kharghoria is an Indian actor from Assam. He have acted in many asaamese movies and dramas.