Prahlad Singh Tipaniya is an Indian folk singer who performs Kabir bhajans in the Malwi folk style from Madhya Pradesh. [2] [3]

He performs along with a group of tambura, khartal, manjira, dholak, harmonium, timki, and violin players.

Prahlad Singh Tipaniya has visited UK, The United States & Pakistan as well as in India in different 'Yatras' named as "Amerika Me Kabir Yatra" and "Had-Anhad" and his music has been played on All India Radio stations in Indore, Bhopal, Jabalpur, Patna, Lucknow and Kanpur and also featured on Doordarshan. Tipanya has received several awards including Shikhar Samman (2005) by Madhya Pradesh Government, Sangeet Natak Akademi Award in 2007 and the Padma Shri in 2011. [6] [7]

He is BSc graduate and teacher of mathematics and science in Government School. [8]

He joined the Indian National Congress [9] and contesting a member of parliament [Lok Shaba] election in 2019 from Dewas-Shajapur parliamentary constituency in Madhya Pradesh. [10] [11] [12] 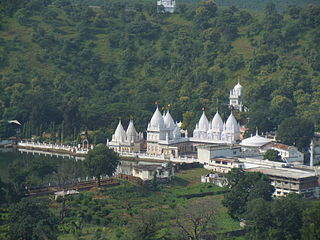 Madhya Pradesh is a state in central India. Its capital is Bhopal, and the largest city is Indore, with Jabalpur, Gwalior, Ujjain, Satna, and Sagar being the other major cities. Madhya Pradesh is the second largest Indian state by area and the fifth largest state by population with over 72 million residents. It borders the states of Uttar Pradesh to the northeast, Chhattisgarh to the southeast, Maharashtra to the south, Gujarat to the west, and Rajasthan to the northwest.

Lal Krishna Advani is an Indian politician who served as the 7th Deputy Prime Minister of India from 2002 to 2004 under Atal Bihari Vajpayee. Advani is one of the co-founders and a senior leader of the Bharatiya Janata Party. He is a longtime member of the Rashtriya Swayamsevak Sangh, a Hindu nationalist volunteer organisation. He also served as Minister of Home Affairs in the BJP-led National Democratic Alliance government from 1998 to 2004. He was the Leader of the Opposition in the 10th Lok Sabha and 14th Lok Sabha. He was the National Democratic Alliance prime ministerial candidate in the 2009 general elections. He is the 2022 Indian presidential election candidate. 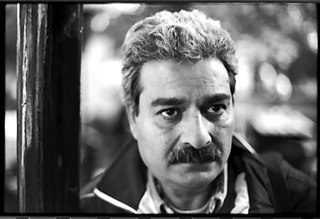 Shivraj Singh Chouhan, often referred to as Mamaji is an Indian politician and member of the Bharatiya Janata Party. He is the 17th and current Chief Minister of Madhya Pradesh, having been elected to the same position 3 times in the past, and a Member of Legislative Assembly in Madhya Pradesh from Budhni. He previously served as the Chief Minister of the Madhya Pradesh, between 2005 and 2018, and holds the record as the state's longest serving Chief Minister. He is also currently serving as a National Vice-President, member of the Parliamentary Board and Central Election Committee of the Bharatiya Janata Party. 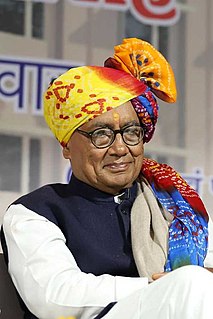 Digvijaya Singh is an Indian politician and a Member of Parliament in the Rajya Sabha. He is also currently a General Secretary of the Indian National Congress party's All India Congress Committee. Previously, he had served as the 14th Chief Minister of Madhya Pradesh, a central Indian state, for two terms from 1993 to 2003. Prior to that he was a minister in Chief Minister Arjun Singh's cabinet between 1980–84. In 2019 Lok Sabha elections he was defeated by Pragya Singh Thakur for Bhopal Lok Sabha seat.

The Garhwali people are an Indian ethnolinguistic group native to the Garhwal, in the Indian state of Uttarakhand, who speak Garhwali, an Indo-Aryan language. The bulk of Garhwal people predominantly live in Garhwal – Anyone lives in Garhwal or is associated with Garhwal's heritage is called a Garhwali. Garwhalis includes all speakers of the Garhwali language or its other dialects who live in the Dehradun, Haridwar, Tehri Garhwal, Pauri Garhwal, Uttarkashi, Chamoli and Rudraprayag areas of Uttarakhand, India..

Mangru Ganu Uikey was an Indian politician and Social worker, who devoted his entire life working for the upliftment and welfare of tribal people. He served as a Member of Parliament in the 1st, 2nd, 3rd, 4th and 5th Lok Sabha of the Govt of India. He was awarded with the honour of "Padma Shri" in 1969 by the Government of India for his outstanding contribution in the field of social work. 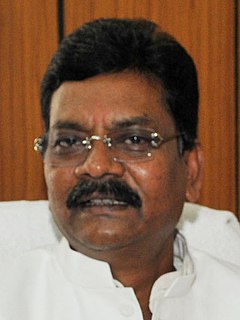 Charan Das Mahant is an Indian politician from Indian National Congress who serves as the Speaker of the Chhattisgarh Legislative Assembly. He was the member of the Indian Parliament, representing Kobra constituency. He is the former Union Minister of State for Agriculture and Food Processing.

Ajay Singh, also known as Rahul Bhaiya, is an Indian politician from the state of Madhya Pradesh.

Sunilam, formerly known as Sunil Mishra, is an Indian socialist politician, writer, and former physicist. As of the mid-1990s, he served as the national general secretary of the Yuva Janata Dal.

Lakshman Singh is an Indian politician who represented the Indian National Congress (INC), and later its rival BJP in the Lok Sabha, the lower house of the Parliament of India. He is a 5 term Member of Parliament and 2 term Member of legislative Assembly.

Bhajju Shyam is an Indian artist, belonging to the Gond-Pardhaan community of Madhya Pradesh. He was awarded India's fourth highest civilian award the Padma Shri in 2018.

Waman Thakre is an Indian photographer and a former deputy director at the Directorate of Panchayat and Social Service of the Government of Madhya Pradesh. He is a Fellow of the Royal Photographic Society and the Photographic Society of America and is a recipient of the Shikhar Award of the MP State government. The Government of India awarded him the fourth highest civilian honour of the Padma Shri, in 2007, for his contributions to Arts.

Mahendra Singh Solanki is an Indian parliament politician. He was elected to the Lok Sabha, lower house of the Parliament of India from Dewas, Madhya Pradesh in the 2019 Indian general election as member of the Bharatiya Janata Party.

Ibrahim Sutar is an Indian social worker from Karnataka, India; and recipient of India's fourth highest civilian award, the Padma Shri. He is nicknamed the "Kabir of Kannada".