Gajam Govardhana is an Indian master weaver, known for his mastery over the art of Ikkat dyeing of Telia Rumal tradition and for his handloom creations. [1] [2] The Government of India honoured him in 2011, with the fourth highest civilian award of Padma Shri. [3]

Gajam Govardhana was born on 1 September 1949 [4] in the small village of Putapakka in Nalgonda district of the south Indian State of Telangana, part of former Andhra Pradesh. [5] [1] He heads the Padmashali family which keeps the Telia Rumal tradition alive and provides work for 500 looms in the state. [3] He runs Murali Sari Emporium, a favoured shopping place for celebrities such as Sonia Gandhi, Shabana Azmi and Sheila Dikshit among others. [1] [3]

Govardhana is credited with several articles and publications. [1] He is also a recipient of many awards [3] such as UNESCO Award for excellence (2002), [4] [1] National Master Weaver Award (2006), [4] [1] Cheongju International Craft Biennale award [4] and the Shilpa Guru Award (2007). [4] [1] The Government of India recognised his services to the art of weaving when he was included in the 2011 Republic Day honours. [3] 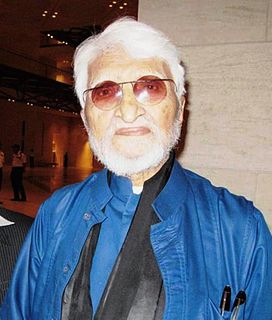 Maqbool Fida Husain better known as M. F. Husain was an Indian artist known for executing bold, vibrantly coloured narrative paintings in a modified Cubist style. He was one of the most celebrated and internationally recognised Indian artists of the 20th century. He was one of the founding member of Bombay Progressive Artists' Group. M.F. Husain is associated with Indian modernism in the 1940s. His early association with the Bombay Progressive Artists' Group used modern technique, and was inspired by the "new" India after the partition of 1947. His narrative paintings, executed in a modified Cubist style, can be caustic and funny as well as serious and sombre. His themes—sometimes treated in series—include topics as diverse as Gandhi, Mother Teresa, the Ramayana, the Mahabharata, the British Raj, and motifs of Indian urban and rural life.

Telia Rumal is a method for the oil treatment of yarn. It originated from Chirala in Andhra Pradesh. At Chirala, in the Prakasam district of Andhra Pradesh where the craft started, the weavers had virtually stopped making Telia Rumals. People who acquired skill in this dying art took the lead to introduce this in Puttapaka village of Nalgonda district in Telangana. Recently Puttapaka Telia Rumal was accorded with Geographical indication (GI) tag. It is an art of Ikat tradition using natural vegetable dyes. Some noted designers like Gajams are popular for Telia Rumal designs. These rumals were patronised by Nizams of Hyderabad.

Puttapaka Sari is a saree made in Puttapaka village, Samsthan Narayanpuram mandal in Nalgonda district, India. It is known for its unique Puttapaka tie and dye style of sarees. 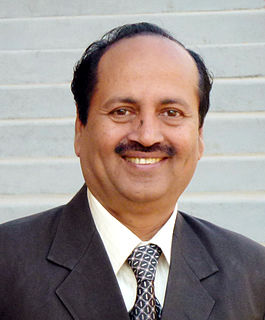 Anita Reddy is an Indian social worker from Karnataka and the founder of Association for Voluntary Action and Services (AVAS), known for her services for the rehabilitation and upliftment of the slum dwellers in Karnataka and Andhra Pradesh. She is the managing trustee of DWARAKA and DRIK Foundations, working for children's education and women's livelihoods. The Government of India honored Anita Reddy in 2011, with the fourth highest civilian award of Padma Shri.

Avvai Natarajan is an Indian scholar, educationist and the former Vice-Chancellor of Thanjavur Tamil University. The Government of India honored Natarajan in 2011, with the fourth highest civilian award of Padma Shri.

Laila Tyabji is an Indian social worker, designer, writer, and craft activist. She is one of the founders of Dastkar, a Delhi-based non governmental organization, working for the revival of traditional crafts in India. She was honored by the Government of India in 2012 with the Indian civilian award of Padma Shri. She is the daughter of late Badruddin Tyabji, ICS, who was a senior Indian civil servant and diplomat.

G. C. D. Bharti is an Indian musician known for his Kabir bhajans.

Padmanabhan Gopinathan is an Indian master weaver of handloom textiles and the founder of Eco Tex Handloom Consortium, an organization promoting handloom weaving in Manjavilakom, a small hamlet in Thiruvananthapuram, in the south Indian state of Kerala. Under the aegis of the organization, he provides employment to over 1800 women in the village. The Government of India awarded him the fourth highest civilian honour of the Padma Shri, in 2007, for his social commitment and his contributions to the art of weaving.

Imitiaz Qureshi is an Indian chef and the master chef at ITC Hotels, known for creating the culinary brand of Bukhara and reviving the Dum Pukht tradition of cuisine. He has served several official banquets hosted by the Prime Minister and the President of India.