Bhatt lives in Jaipur, Rajasthan, India, with his wife and two sons. [5] His elder son Salil Bhatt is a Mohan veena player (and also a player of the Satvik veena). Bhatt's parents, Manmohan Bhatt and Chandrakala Bhatt were teaching and performing musicians, who imparted knowledge of music to V.M Bhatt. [6] His nephew, Krishna Bhatt, plays the sitar and tabla. He is the younger brother of Manju Mehta who is co-founder of Saptak School of Music at Ahmedabad and a trained disciple of Pandit Ravi Shankar

Bhatt is best known for his Grammy award winning album A Meeting by the River with Ry Cooder released on Water Lily Acoustics label. He is also known for other fusion and pan-cultural collaborations with Western artists such as Taj Mahal, Béla Fleck and Jerry Douglas. Exposure such as an appearance on the 2004 Crossroads Guitar Festival, organized by Eric Clapton, allows his playing to reach a larger audience. Guitar duet release with Guitarist Kapil Srivastava (guitarmonk founder) [7] in the year 2016 for the composition "Merry Love Rain." [8] Folk musician Harry Manx, who studied with Salil Bhatt for five years, plays a Mohan veena. Counting Crows' bassist Matt Malley also plays a Mohan veena and is a student and friend of Bhatt. Australian musician Lawrie Minson also learned Mohan veena from Salil. In October 2018, 19 year old Sukhnidh Kaur accused Vishwa Mohan Bhatt of "harassing" her when he performed at her school. Kaur was 14 year old at that time and was part of the school choir. Bhatt's son, Salil, has denied these allegations. [9] [10] He performed at the Jabalpur Engineering College on 9 April 2012. [11]

Taj Mahal is an American blues musician, singer-songwriter, multi-instrumentalist, actor, and film composer. He plays the guitar, piano, banjo, harmonica, and many other instruments, often incorporating elements of world music into his work. Mahal has done much to reshape the definition and scope of blues music over the course of his more than 50-year career by fusing it with nontraditional forms, including sounds from the Caribbean, Africa, India, Hawaii, and the South Pacific. 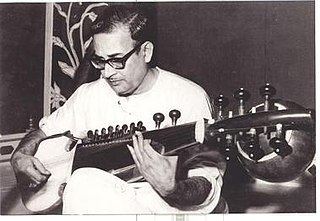 A Mohan Veena is either of two distinct plucked string instruments used in Indian classical music, especially Hindustani classical music which is associated with the northern parts of the Indian subcontinent. A modified sarod, created by sarod player Radhika Mohan Maitra in the 1940s, was called the mohan veena. The instrument was so named by musicologist Thakur Jaidev Singh, then the chief producer at All India Radio. Later Vishwa Mohan Bhatt modified a Hawaiian guitar to create an instrument also called the mohan veena, with Bhatt naming the instrument after himself. The latter instrument has become more closely associated with the name, especially following Bhatt winning the Grammy Award in 1994.

Harry Manx is a Canadian musician who blends blues, folk music, and Hindustani classical music. His official website describes his music as being a "blend Indian folk melodies with slide guitar blues, add a sprinkle of gospel and some compelling grooves and you'll get Manx's unique "mysticssippi" flavour." Manx plays the slide guitar, harmonica, six-string banjo, mohan veena and Ellis stomp box. He studied for five years in India with Vishwa Mohan Bhatt. Bhatt is the inventor of the 20-stringed mohan veena, which has become Manx's signature instrument. He has released twelve albums in twelve years, and has his own record label Dog My Cats Records. He has received much recognition and many awards, including: seven Maple Blues Awards, six Juno nominations, the Canadian Folk Music Award in 2005 for Best Solo Artist, and CBC Radio’s "Great Canadian Blues Award" in 2007.

Water Lily Acoustics is an American record label in Santa Barbara, California founded in 1985 by Kavichandran Alexander, a Tamil from Sri Lanka. Alexander is a record producer and audio engineer. He named the label after his mother, Lily. The label primarily releases recordings of Indian classical music and collaborations by musicians from around the world. At its inception, the Alexander emphasized Eastern musicians, espousing the belief that they had seldom been recorded with proper sound quality compared to their Western counterparts. He began to include music from outside Asia. Alexander has recorded and produced musicians such as José Neto, Ali Akbar Khan, V. G. Jog, Vishwa Mohan Bhatt, Ry Cooder, Jerry Douglas, Béla Fleck, Taj Mahal, Papa Susso, Jiebing Chen, Simon Shaheen, Hungarian National Philharmonic, Philadelphia Orchestra, and the Saint Petersburg Philharmonic Orchestra. Music he has recorded has appeared in the films Angel Eyes, Dead Man Walking, and Meet the Fockers.

Vasanta Habba, which means spring festival in the Kannada language, is a cultural festival organised by the Nrityagram foundation in the city of Bangalore, India. It is a very popular event and is considered the classical Woodstock of India. This festival, first held in the year 1990, was the brainchild of Protima Bedi, the founder of Nrityagram. The festival is held in the premises of Nrityagram at Hesaraghatta in the outskirts of Bangalore and attracts the best musicians, dancers and cultural artists from across India. Starting from an audience of about 3000 in its inaugural year, the 2003 edition saw over 40,000 people attending the event.

Breathing Under Water is an album by Anoushka Shankar and Karsh Kale released on 28 August 2007. Shankar and Kale expand beyond cultural and traditional borders of music with this collaboration. With the help of featured guests Ravi Shankar, Sting, Norah Jones, Midival Punditz, Salim Merchant, Vishwa Mohan Bhatt and others, the duo blended Indian classical music, electronica, dance and folk styles.

Doug Cox is a multi-instrumentalist, composer and music programmer, and is currently signed to Toronto's NorthernBlues Music. 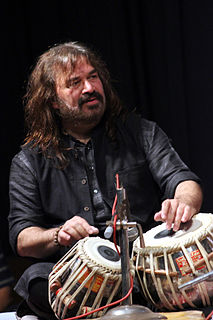 Tabula Rasā is a collaborative album by American banjoist Béla Fleck together with Vishwa Mohan Bhatt and Jie-Bing Chen, who plays the traditional Chinese two-string fiddle "Erhu". The unusual combination of Fleck's banjo together with these traditional instruments creates a unique sound on this album, which was nominated for the Grammy Award for Best World Music Album at the 39th Grammy Awards.

Salil Bhatt is an Indian slide guitar player. He is the son of the fellow slide player and Grammy Award winner, Padmashree Vishwa Mohan Bhatt.

A Meeting by the River is an album recorded by Ry Cooder and Vishwa Mohan Bhatt; it was recorded in September 1992 and released in April 1993 through the record label Water Lily Acoustics. This improvised, collaborative album features Cooder on slide guitar and Bhatt on the Mohan veena, a stringed instrument created by Bhatt. A Meeting by the River was produced by Kavichandran Alexander and Jayant Shah, engineered by Alexander, and mastered by Kevin Michael Gray and Paul Stubblebine. It peaked at number four on Billboard's Top World Music Albums chart, and earned Cooder and Bhatt Grammy Awards for Best World Music Album at the 36th Grammy Awards (1994). The album is included in Tom Moon's 2008 book 1,000 Recordings to Hear Before You Die.

Sandeep Das is an Indian Tabla player and composer currently based in Boston, MA.

Kavichandran Alexander is an audio engineer and record producer. He is a Sri Lankan Tamil.

Laura Sullivan is an American composer, arranger, pianist, producer, author, and a New-age, World, Spoken Word, Native American, and Pop music artist. She has worked with leading musicians of the industry and Grammy award winners including Eric Sullivan, Nancy Rumbel, Jeff Oster, Eugene Friesen, and Will Ackerman. She is best known for her album, Love's River, which won the Grammy Award for Best New Age Album in the 56th Annual Grammy Awards. Love’s River was recognized as one of the best commercial productions by Will Ackerman after 2009. 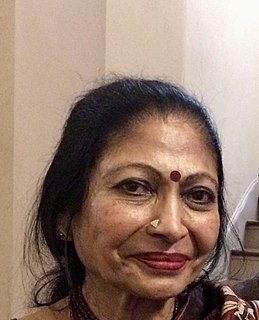 Music for the Motherless Child is a collaboration album between English folk guitarist Martin Simpson and Chinese pipa player Wu Man, released by Water Lily Records in 1996. As with the other album's released on the label, it was recorded at Christ the King Chapel, St. Anthony Seminary, Santa Barbara, by Tamil producer and label owner Kavichandran Alexander, who, also similarly to the label's other releases, curated and oversaw the project as a fusion between the music of two disparate cultures. Neither Simpson or Man had met before the recording of the album, which was done in only a single session that lasted seven hours. Alexander employed vacuum tube recording and took advantage of the church's natural acoustics.