Pandit Prasad Sawkar is an Indian vocalist, and scholar of Indian classical, semi-classical, and devotional music. He received prestigious Padma Shri award in the year 2006 for his work in music and Sangeet Natak

Sambaprasad Raghuvir Sawkar was born in Baroda, Gujarat in a family of musicians and actors hailing from Goa. His father, Raghuvir Sawkar, was a singer and actor who was famous for acting a ladies character in the play who was known as Rangdevta. He took his formal education in music and acting from his father. Later he came under the influence of great musicians such as Jitendra Abhisheki and Nivruttibuwa Sarnaik [1]

Sawkar acted as child artist in the play Jinjihun Sutka (जिंजीहून सुटका) as Bal Shivaji at the start of career in Marathi theatre. Later he went to his uncle Dattaram Sawkar for school education at Mhapsa who was also a harmonium player. Sawkar continued getting training of music over there. He played a role of 'Kruttika' in the play "Sanshay Kallol". He also made a record of by playing four characters in the same play namely Kruttika, Sadhu, Singer and Vaishakh Sheth. Later he played in Plays like Soubhadra, Mruchchakatik, Vidyharan, Manapman with "Kala Mandir" organization.

He also made career in Marathi Cinema which includes Pedgaoche Shahane, Gora Kumbhar

Swakar travelled to United States with his wife in 1972 and played small roles in his plays over there which also became very popular. [2]

Prabhakar Panshikar also known as Pant was an actor on Marathi Stage. His character as Lakhoba Lokhande in the drama To Mi Navhech, written by Prahlad Keshav Atre is considered to be one of the immortal roles presented so far on the Marathi Theater. Five unique characters played in this drama To Me Navhech made him famous in Marathi Theater and Maharashtra. He also performed Aurangzeb's role in a popular play Ithe Oshalala Mrutyu based on the death of Sambhaji Raje Bhosale. He was also the owner of Natyasampada, a well-known Marathi drama production organization.

Subodh Bhave is a popular Indian actor, writer, producer and director who is known for his work in Marathi Cinema. He has acted in many commercially successful and critically acclaimed Marathi movies. He is best known for his work in Ani... Dr. Kashinath Ghanekar, Balgandharva, Katyar Kaljat Ghusali.

Mahesh Kale is an Indian Classical vocalist renowned for his specialization in Indian Classical (Hindustani), Semi-Classical, Devotional music including Natya Sangeet. Mahesh Kale, after winning the 63rd National Film Award as the Best Playback Singer, for classical piece in the film Katyar Kaljat Ghusli, has firmly established himself as a face of Indian classical music of the new generation. He is a disciple of Pandit Jitendra Abhisheki.

Sangeet Natak in Marathi language literally means Musical Drama. As the name suggests, this form of drama combines prose as well as poetry in form of songs to convey the story. In a manner, they are very much similar to Musicals. Sangeet Natakas played a vital role in the development of Marathi theater and thus the Marathi cinema as well as Indian film industry. Sangeet Natak start with praise of Lord Natraja which is called as Naandi or Mangalaacharan or Suchakpad usually the famous one "Panchatunda Nararundamaldhar" from Sangeet Shakuntal. They are popular for use of Indian classical music. The "Dramatic Music" is called Natya Sangeet, one of the two popular forms of vocal arts in Maharashtra and surrounding states. The other is Bhavageet.

Charudatta Aphale is a kirtan performer, son of kirtan performer Govindswami Aphale. Govindswami was often referred to Aphale-buwa when he was active. And now Charudatta is referred to as Aphale-buwa, with Buwa being an honorific term. Aphale took his kirtan lessons from his parents and Pt. Sharad Gokhale, Pt. Padmakar Kulkarni, Mukundbuva Gokhale, Agashe Buva, Madhukar Khadilkar, Pt. Vijay Bakshi

Ashok Patki is an Indian music director and composer; working predominantly in Marathi cinema, theatre and television. He is best known for his very popular compositions like "Mile Sur Mera Tumhara", "Purab Se Surya Uga". Patki has also composed over 5000 jingles and has been awarded with Indian National Film Award for Best Music Direction at 54th National Film Awards in 2006 for a Konkani film, Antarnaad. 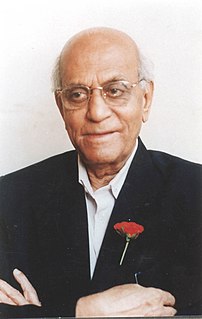 Katyar Kaljat Ghusali is a 2015 Marathi film based on a play by the same name. Directed by Subodh Bhave, the film stars Sachin Pilgaonkar, Shankar Mahadevan, and Subodh Bhave in lead roles. The film marks the directorial debut for Bhave, and the theatrical acting debut for Shankar Mahadevan. The original play, written by Purushottam Darvhekar, premiered in 1967 in Mumbai, where Hindustani classical vocalist Vasantrao Deshpande played one of the protagonists. In 2010, the play was relaunched with protagonists essayed by Rahul Deshpande, grandson of Vasantrao Deshpande and singer Mahesh Kale. The film's music is composed by Shankar–Ehsaan–Loy, and retained some of the songs from the original play composed by Jitendra Abhisheki.

Pandit Chandrakant Limaye is a Hindustani Classical Singer from India, and the successor disciple of the well known vocalist Late Dr.Vasantrao Deshpande.

Lalan Sarang was an Indian film, theatre and television producer and actress in Marathi, Hindi, and Gujarati productions. She produced several plays and was an owner of Masemari, a seafood restaurant in Pune.

Narayanrao Bodas was an Indian classical vocalist from Maharashtra, belonging to the Gwalior gharana. He was also a leading vocalist of Marathi stage drama.

Apurva Motiwale is an Indian Editor, Who works in Hindi, Marathi and Telugu cinema. Frequent collaborator with Ashish Mhatre she has edited more than 40films. Her first film as an editor was Ajab Lagnachi Gajab Goshta (2010).