Neelamani Devi is an Indian craftswoman and master potter from Manipur. [1] Her creations have been the theme of two documentary films; Mittee aur Manab by renowned filmmaker, Mani Kaul, and Nilamani: The Master Potter of Manipur, by Aribam Syam Sharma. [2] The TV Series, Mahabharata also featured her works on one of the episodes. The Government of India awarded her the fourth highest civilian honour of the Padma Shri, in 2007, for her contributions to the art of pottery making. [3]

Neelamani Devi was born to Kharaibam Devasingh Singh and Kharaibam Ongbi Sanajaobi on 1 September 1938 at Thongjao Keithel Leikai, Thoubal District in the northeast Indian state of Manipur and received the early lessons in pottery making from her mother. [2] She lost her parents during childhood, but with sponsorship from the Khadi and Gram Udyog Mandal, continued her studies at Somthal Pargana, Bihar and completed her training in 1960. Her career started as a demonstrator at the Directorate of Industries of the Government of Manipur, but left the job and returned to her village to start Pottery Training Cum Production Centre in 1966. There, she trained the local women in pottery making which is known to have helped them to earn their livelihoods. [2]

Devi has traveled in India and abroad with her works; she has been a member of the Indian delegation who participated in the Five Indian Artisans exhibition and demonstration at the Museum of Ethnography, Sweden, as a part of the Festival of India. [4] She also participated in exhibitions and demonstrations at several places in Japan such as the Hyōgo Prefectural Museum of Art, Kobe, (The Art of the Adivasi), Tobacco and Salt Museum, Tokyo, Tougen Museum, Shirane and Yamanasi, Saitama Prefectural Museum of History and Folklore, and Mithila Museum, Tokamachi and Nigata (Indian Adivasi Art Exhibitions). [4] In 1986, renowned filmmaker, Mani Kaul, made a documentary film on Devi, titled Mittee aur Manab and Aribam Syam Sharma followed suit in 2003, with his non-feature film, Nilamani: Master Potter of Manipur, [5] made for Doordarshan, Guwahati. [6] One of the episodes of the Indian TV series, Mahabharata and the first three episodes of Mahabharata TV series made by French Television featured her pottery creations. [5] The details of her work have also been documented in print in a book, Other Masters : Five Contemporary Folk and Tribal Artists of India, published in 1998 by the Handicrafts and Handlooms Exports Corporation of India. [7] The book is a prescribed text for academic studies at University of Goa. [8]

Imphal is the capital city of the Indian state of Manipur. The metropolitan centre of the city contains the ruins of Kangla Palace, the royal seat of the former Kingdom of Manipur, surrounded by a moat. Spread over parts of the districts of Imphal West and Imphal East, the former contains the majority of the city's area and population. Imphal is part of the Smart Cities Mission under the Ministry of Housing and Urban Affairs. 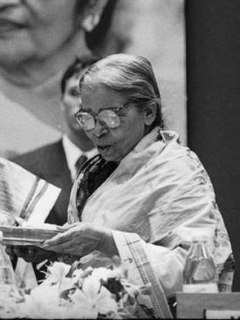 Rajmohini Devi was an Indian social worker, gandhian and the founder of Bapu Dharma Sabha Adivasi Seva Mandal,established by her in 1951. the famine of Surguja in 1951 had great scarcity of food grains and crop failure. this famine has direct bearing on the rise of a reform movement called Rajmohini Devi Movement. a non governmental organization working for the welfare of the tribal people of Gondwana, in the Indian state of Chhattisgarh. It is reported that she had a vision about Mahatma Gandhi and his ideals during the famine of 1951 and she started a movement, for the liberation of women and eradication of superstitions and drinking habits among the tribal people. The movement gradually assumed the status of a cult movement with a following of over 80,000 people and was later converted into a non governmental organization, under the name, Bapu Dharma Sabha Adivasi Seva Mandal. The organization functions through several ashrams set up in the states of Chhattisgarh, Bihar and Uttar Pradesh.

Olangthagee Wangmadasoo is a 1979 Manipuri film written by M. K. Binodini Devi, produced by G. Narayan Sharma and directed by Aribam Syam Sharma. The film features Kangabam Tomba, Yengkhom Roma and Kshetrimayum Rashi in the lead roles. The movie was censored in 1979 and released at Friends Talkies, Paona Bazar on 18 January 1980.

The Cinema of Manipur is the film industry based in Manipur, India. It does not include only the Meitei language movies, but covers all the films made by the people from different communities residing in Manipur. The Manipuri film industry was born when Matamgi Manipur was released on 9 April 1972.

Matamgi Manipur is the first full-length Manipuri feature film released in the year 1972. The movie is directed by Debkumar Bose and produced by Karam Monomohan, under the banner of K.T. Films Private Limited. The black and white film features Gurumayum Rabindra Sharma, Yengkhom Roma, Kangabam Birbabu and Kshetrimayum Rashi in the lead roles. The story of the film was written by Arambam Samarendra and screenplay by Debkumar Bose. The film won the President's Medal at the 20th National Film Awards. It is an adaptation of Arambam Samarendra's theatrical play Tirtha Yatra. 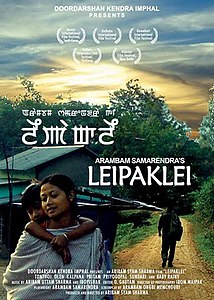 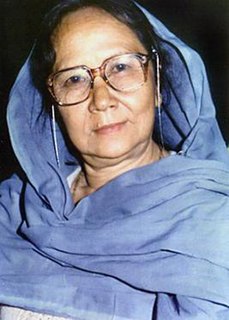 Nongphadok Lakpa Atithi is a 2019 Manipuri film directed by Aribam Syam Sharma and produced by Deepak Sarmah. It stars Ningthoujam Rina and Lairenjam Olen in the lead roles. The film was premiered at the 3rd Guwahati International Film Festival 2019 as the Opening Film of the Indian section. It is based on Lamabam Viramani's short story Atithi. It was written as a radio play by M. K. Binodini Devi under the title Nongphadok Lakpada. The adapted screenplay of the film was done by Aribam Syam Sharma. The film won four awards at the 13th Manipur State Film Festival 2020.

Paokhum Ama is the first Manipuri colour film released in the year 1983. The film is directed by Aribam Syam Sharma and written by M. K. Binodini Devi. It stars Kangabam Tomba and Yengkhom Roma in the lead roles. The movie was premiered at the Tyneside International Film Festival, United Kingdom.

Oinam Gautam Singh is an Indian film director and editor who works in Manipuri films. He started his career in Manipuri cinema as an editor and later took up direction since more than a decade. One of the successful filmmakers in Manipuri Cinema, he is the recipient of many awards, including a National Film Award for his 2011 movie Phijigee Mani. Gautam has worked under eminent film personalities like Aribam Syam Sharma and Oken Amakcham. He had been a Jury Member of Indian Panorama for 45th International Film Festival of India (IFFI) 2014.

Lamja Parshuram is a 1974 Manipuri film directed by Aribam Syam Sharma produced by G. Narayan Sharma for N.S. Films. The script of the film is written by Elangbam Dinamani Singh and story by G.C. Tongbra. The movie features Kangabam Tomba in the titular role, and Lourembam Bedamani as the lead female protagonist. It was released on 24 April 1974 at Pratap Talkies, Paona Bazar. The film ran for more than 100 days and became the first Manipuri hit feature film.