S. Shakir Ali, is an Indian painter, known for his Mughal and Persian miniature paintings. [1] [2] He was honoured by the Government of India, in 2013, by bestowing on him the Padma Shri, the fourth highest civilian award, for his contributions to the field of art. [3]

Sayed Shakir Ali was born in Jaipur, in 1915, to the art collector, Sayed Sabir Ali, locally known as "Chunnu Mian". His grandfather, Syed Hamid Ali, was also a court artist. Sayed Shakir Ali, though graduated in Arts from Rajasthan University in 1978, took up the tutelage of renowned painters , Ram Gopal Vijayvargiya and Ved Pal Sharmaand (Bannu) [4] to learn Mughal and company styles of painting as well as traditional art. [5] [6]

Sayed Shakir Ali lives in Jawhar nagar in Jaipur. [2] Sayed Zohaib Ali, Sayed Shakir Ali's son, also follows the footsteps of his father and is a known painter and a recipient of Roshan Kalapesi Memorial Award for Arts and Crafts from Paramparik Karigar [5]

The Ministry of External Affairs (India) have selected many of Sayed Shakir Ali's paintings for gifting to state dignitaries and other persons of importance. [5] He has represented India in the 10th SAARC Folk festival held at Islamabad in 1992 where he won the first prize in the art competition. He is also credited with the restoration of some of the old paintings at the City Palace, Jaipur and Prince of Wales Museum, Mumbai. [5]

Sayed Shakir Ali has been holding exhibitions since 1981, [5] in India and abroad, in places like Milan, Paris, Bangkok, Dubai and Pakistan. [6] [7] Some of his notable exhibitions are:

Sayed Shakir Ali regularly holds live demonstrations, the first of which was at the Craft Museum, New Delhi, in 1981. Subsequently he has performed at other demonstrations held at the American and British Embassies and major hotel groups such as Taj Hotels Resorts and Palaces and Ashok Group. [5]

In 2013, the Government of India honoured Sayed Shakir Ali with the fourth highest civilian award, Padma Shri. [3] He is also a recipient of the Lalit Kala Akademi National Award, in 1993 [1] [6] He has also received the Nexzen Excellence Award, which was awarded to him in October 2014. [5] 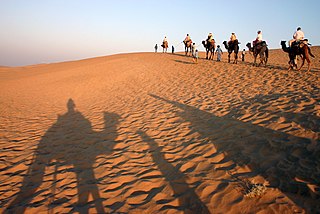 Rajasthan is a state in northern India. The state covers an area of 342,239 square kilometres (132,139 sq mi) or 10.4 percent of the total geographical area of India. It is the largest Indian state by area and the seventh largest by population. Rajasthan is located on the northwestern side of India, where it comprises most of the wide and inhospitable Thar Desert and shares a border with the Pakistani provinces of Punjab to the northwest and Sindh to the west, along the Sutlej-Indus river valley. It is bordered by five other Indian states: Punjab to the north; Haryana and Uttar Pradesh to the northeast; Madhya Pradesh to the southeast; and Gujarat to the southwest. Its geographical location is 23.3 to 30.12 North latitude and 69.30 to 78.17 East longitude, with the Tropic of Cancer passing through southernmost tip of the state.

Zahoor ul Akhlaq was a pioneering artist from Pakistan. He is known for his approach to painting, sculpture, design and architecture, as well as his teaching at the NCA in Lahore.

Vasudeo S. Gaitonde (1924–2001) was regarded as one of India's foremost abstract painters. He received Padma Shri Award in 1971.

Akhtarul Wasey was a professor of Islamic studies who taught at Jamia Millia Islamia in New Delhi. Currently he is president of Maulana Azad University, Jodhpur, India, and professor emeritus in the Department of Islamic Studies in Jamia Millia Islamia. As a versatile personality he assumed many formal and informal designations. Apart from his academic achievements he regularly appears on TV, debating on issues related to Islam and Muslims, and has delivered over 400 radio and 300 TV talks along with extensive and frequent writings in different news papers and magazines. He is considered to be a Muslim spokesperson among academicians. 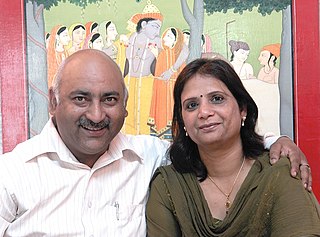 Bashir Ahmed, son of Barkat Ali Malik, was born in 1953. He is a Pakistani painter, also known as Indian miniature painter.

Cartist Automobile Art Festival is an annual art festival held in Jaipur, the capital of Indian state Rajasthan. It is an initiative to promote Indian culture and art along with love for vintage cars. The basic idea of Cartist is to spread awareness among masses and classes regarding the importance of salvaging the epitome of royalty, vintage and classic cars.

Gopal Swami Khetanchi is an Indian painter based in Jaipur. Hailing from an artistic family in north Rajasthan, Khetanchi studied fine art in Jaipur and worked for some time as an assistant art director in Bollywood and an illustrator for magazines, before returning to Rajasthan to focus on painting.