MUFG Bank, Ltd. (株式会社三菱UFJ銀行, Kabushiki Gaisha Mitsubishi Yū-efu-jē Ginkō) is the largest bank in Japan. It was established on January 1, 2006, following the merger of the Bank of Tokyo-Mitsubishi, Ltd. and UFJ Bank Ltd. MUFG is one of the three so-called Japanese "megabanks" (along with SMBC and Mizuho). As such, it is considered a systemically important bank by the Financial Stability Board.

The bank serves as the core retail, corporate, and investment banking arm of the Mitsubishi UFJ Financial Group. [1] Its traditional client base is made up of Japanese corporates, but overseas corporate lending increased 35% in the nine months to December 31, 2011. [2]

As of June 23, 2019, Mitsubishi UFJ Financial Group / MUFG Bank was ranked as the largest bank in Japan and the fourth largest in the world. [3]

The bank's head office is in Marunouchi, Chiyoda, Tokyo, and it has 772 other offices in Japan and 76 offices overseas. [4]

MUFG Bank is the product of three bank mergers that occurred between 1996 and 2006.

Mitsubishi Bank was founded in 1880 by a former samurai, Iwasaki Yatarō, and was a core member of the Mitsubishi Group of companies. It merged with The Bank of Tokyo in 1996 to form The Bank of Tokyo-Mitsubishi, Ltd. (株式会社東京三菱銀行, Kabushiki kaisha tōkyō mitsubishi ginkō), which at that point was the world's largest bank in terms of total assets. [5] In 1998, upon merger of the then second and third largest Swiss banks, Union Bank of Switzerland and Swiss Bank Corporation, the newly created UBS AG became the second largest in the world at the time, behind only the Bank of Tokyo-Mitsubishi. [6] The Bank of Tokyo had historically focused on foreign exchange business since its foundation as the Yokohama Specie Bank in 1880, while Mitsubishi had had a stronger focus on domestic corporate and retail banking. Both banks were relatively healthy in the wake of the Japanese asset price bubble. [7]

Until the Tokyo-Mitsubishi merger took place in 1996, Sanwa Bank, which was based in Osaka and was the anchor of the Sanwa Group keiretsu, had been considered the strongest bank in Japan, and it had aimed to be the world's largest bank during the "bubble era". [7] By 2000, however, Sanwa was the fourth largest bank in Japan. It entered into merger talks with two other large banks, Asahi Bank and Tokai Bank, to create the world's third-largest bank by assets. Asahi (now part of Resona Holdings) pulled out of these talks later that year. [8] By 2001, The Toyo Trust & Banking Co. had been added to the merger group and the combined company was to be called United Financial Holdings of Japan. [9] The merger was completed in 2002 and the new bank was officially named UFJ Bank Ltd. (株式会社ユーエフジェイ銀行, Kabushiki kaisha yūefujei ginkō). [10] UFJ was headquartered in Nagoya, the historical headquarters of Tokai Bank. During its short life, it was plagued by bad debt problems and by infighting between the employees of its predecessor companies.

The holding companies of BTM and UFJ agreed to merge in 2005, forming Japan's largest bank by assets and market capitalization. This led to litigation between BTM and Sumitomo Trust & Banking Co., which had previously agreed to an alliance with UFJ under which it would take over UFJ's trust banking operations. BTM and UFJ settled their dispute for 2.5 billion yen in late 2006. [11] The merger of the two bank holding companies was completed on October 1, 2005, creating the Mitsubishi UFJ Financial Group. The core banking units of MTFG and UFJ Holdings, the Bank of Tokyo-Mitsubishi, Ltd. and UFJ Bank Ltd., respectively, continued to operate separately until January 1, 2006, when the two units combined to form The Bank of Tokyo-Mitsubishi UFJ, Ltd. (BTMU) [10]

Mitsubishi Bank and the Bank of Tokyo each had significant banking subsidiaries in California (Bank of California and Union Bank respectively) before their merger. At the time of the merger, these U.S. banks also merged to form UnionBanCal Corporation. BTM listed UnionBanCal on the New York Stock Exchange in 1999. In 2008, BTMU purchased all of the outstanding shares of UnionBanCal. BTMU moved its New York-based banking operations to Union Bank and renamed the company MUFG Union Bank in 2014.

BTMU was investigated by New York banking regulators over its role in routing payments for Iranian customers through its New York branch in violation of U.S. sanctions. BTMU settled with the state for $250 million in 2013. A second settlement was reached for $315 million in 2014 after it was found that PricewaterhouseCoopers had altered an investigation report on the issue; PwC itself was fined $25 million in relation to the matter. [12]

UFJ, which stands for the United Financial of Japan, is used in the former companies of UFJ Bank, UFJ Group, and UFJ Holdings. These related institutions disappeared after the merger of The Bank of Tokyo-Mitsubishi, and UFJ Bank in 2005. UFJ Bank itself was established by the merger in 2002 of the Sanwa Bank, Tokai Bank, and Toyo Trust and Banking. 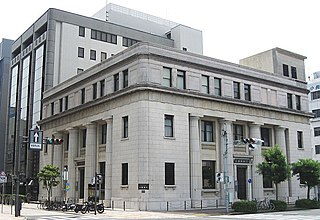 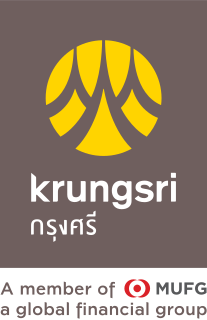 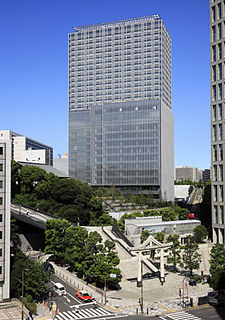 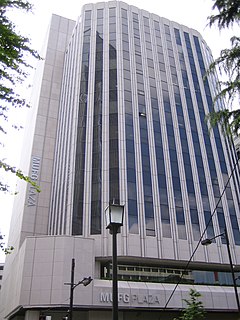 The Bank of Tokyo, Ltd. was a Japanese foreign exchange bank that operated from 1946 to 1996. In January 1996, it merged with Mitsubishi Bank to form The Bank of Tokyo-Mitsubishi. Its headquarters was in the Nihonbashi district of Tokyo, adjacent to the Bank of Japan.

Media related to Bank of Tokyo-Mitsubishi UFJ at Wikimedia Commons