ICICI Bank Limited is an Indian multinational bank and financial services company headquartered in the city of Vadodara, India. It offers a wide range of banking products and financial services for corporate and retail customers through a variety of delivery channels and specialized subsidiaries in the areas of investment banking, life, non-life insurance, venture capital and asset management.

ICICI's shareholding in ICICI Bank was reduced to 46% through a public offering of shares in India in 1998, followed by an equity offering in the form of American depositary receipts on the NYSE in 2000. [16] ICICI Bank acquired the Bank of Madura Limited in an all-stock deal in 2001 and sold additional stakes to institutional investors during 2001–02. [17]

In the 1990s, ICICI transformed its business from a development financial institution offering only project finance to a diversified financial services group, offering a wide variety of products and services, both directly and through a number of subsidiaries and affiliates like ICICI Bank. In 1999, ICICI become the first Indian company and the first bank or a financial institution from non-Japan Asia to be listed on the NYSE. [18]

During the financial crisis of 2007–2008, customers rushed to ICICI ATMs and branches in some locations due to rumors of bank failure. The Reserve Bank of India issued a clarification on the financial strength of ICICI Bank to dispel the rumours. [20]

In March 2020, the board of ICICI Bank Ltd. approved an investment of Rs 1,000 crore in Yes Bank, resulting in a 5% ownership interest in Yes.

ICICI bank has contributed to the setting up of a number of Indian institutions to establish financial infrastructure in the country over the years:

ICICI Bank Canada is a wholly owned subsidiary of ICICI Bank, whose corporate office is located in Toronto. Established in December 2003, [41] ICICI Bank Canada is a full-service direct bank with assets of about $6.5 billion as of 31 December 2019. [41] It is governed by Canada's Bank Act and operates under the supervision of the Office of the Superintendent of Financial Institutions. [42] The bank has seven branches in Canada. [41]

In 2003, ICICI Bank Canada was established as a Schedule II (foreign-owned or -controlled) bank. It was incorporated in November and opened its head office and downtown Toronto branch in December. [41] In 2004 launched an online banking platform. In 2005, it launched its financial advisor services channel. In 2008, the bank relocated its corporate office to the Don Valley Business Park in Toronto. In 2010, it launched a mortgage broker service. In 2014, the bank launched a mobile banking app.

ICICI Bank Canada is a member of several esteemed trade association; as well as the Canadian Bankers Association (CBA); [43] a registered member with the Canada Deposit Insurance Corporation (CDIC), [44] a federal agency insuring deposits at all of Canada's chartered banks; Interac Association; [45] Cirrus Network; and The Exchange Network. [46]

ICICI Bank UK PLC was incorporated in England and Wales on 11 February 2003, as a private company with the name ICICI Bank UK Ltd. It then became a public limited company on 30 October 2006. [47] Presently the Bank has seven branches [48] in the UK. : one each in Birmingham, East Ham, Harrow, London, Manchester, Southall and Wembley.

The bank currently has seven branches in the UK. ICICI Bank UK PLC is authorised by the Prudential Regulation Authority and regulated by the Financial Conduct Authority and Prudential Regulation Authority. It is covered by the Financial Services Compensation Scheme (FSCS). The bank has a long-term foreign currency credit rating of Baa1 from Moody's. At 31 March 2019, it had a capital adequacy ratio of 16.8%. [47]

A few years after its rise to prominence in the banking sector, ICICI bank faced allegations on the recovery methods it used against loan payment defaulters. A number of cases were filed against the bank and its employees for using "brutal measures" to recover the money. Most of the allegations were that the bank was using goons to recover the credit card payments and that these "recovery agents" exhibited inappropriately and in some cases, inhuman behaviour. Incidents were reported wherein the defaulters were put to "public shame" by the recovery agents.

The bank also faced allegations of inappropriate behaviour in recovering its loans. These allegations started initially when the "recovery agents" and bank employees started threatening the defaulters. In some cases, notes were written by the bank's employees asking the defaulters to "sell everything in the house including family members", were found. Such charges faced by the bank rose to a peak when suicide cases were reported wherein the suicide notes spoke of the bank's recovery methods as the cause of the suicide. This led to legal battles and the bank paying huge compensation. [52] [53]

ICICI Bank was one of the leading Indian banks accused of blatant money laundering through violation of RBI guidelines in the famous CobraPost [54] sting operation which shook up Indian banking industry during April–May 2013. [55]

On 14 March 2013 the online magazine Cobrapost released video footage from Operation Red Spider showing high-ranking officials and some employees of ICICI Bank agreeing to convert black money into white, an act in violation of Money Laundering Control Act. The Government of India and Reserve Bank of India ordered an inquiry following the exposé. On 15 March 2013, ICICI Bank suspended 18 employees, pending inquiry. [56] [57] [58] On 11 April 2013 the Deputy Governor of RBI, H R Khan reportedly said that the central bank was initiating action against ICICI Bank in connection with allegations of money laundering. [59] [60]

On 4 October 2018, the then MD & CEO Chanda Kochhar stepped down from her position following allegations of corruption. [61] In January 2019, based on the report of an enquiry panel headed by Justice Srikrishna, the bank board officially terminated her from service. It also become one of the first in the country to ask for a claw back of bonuses and benefits. [62] In 2020 the Enforcement Directorate provisionally seized assets and shares belonging to Chanda Kochhar with an estimated value of more than Rs 78 crore, in relation to the ICICI bank loan case. [63] 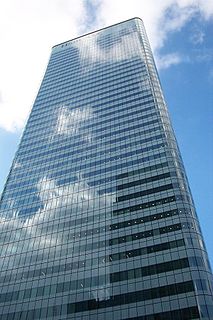 HSBC Holdings plc is a British multinational investment bank and financial services holding company. It is the second largest bank in Europe behind BNP Paribas, with total equity of US$204.995 billion and assets of US$2.984 trillion as of December 2020. HSBC traces its origin to a hong in British Hong Kong, and its present form was established in London by the Hongkong and Shanghai Banking Corporation to act as a new group holding company in 1991; its name derives from that company's initials. The Hongkong and Shanghai Banking Corporation opened branches in Shanghai in 1865 and was first formally incorporated in 1866.

Modern banking in India originated in the mid of 18th century. Among the first banks were the Bank of Hindustan, which was established in 1770 and liquidated in 1829–32; and the General Bank of India, established in 1786 but failed in 1791.

HSBC Bank plc is a British multinational banking and financial services organisation. HSBC's international network comprises around 7,500 offices in over 80 countries and territories in Europe, the Asia-Pacific region, the Americas, the Middle East and Africa.

The IDBI Bank Limited is an Indian private sector bank and a subsidiary of Life Insurance Corporation (LIC) providing financial and banking services. It was established in 1964 as Industrial Development Bank of India, a development finance institution, which provided financial services to industrial sector. In 2005, the institution was merged with its commercial division, IDBI Bank, forming the present-day banking entity and was categorized as "other public sector banks" category. Later in March 2019, RBI recategorized it as a private bank. Many national institutes find their roots in IDBI like SIDBI, India Exim Bank, National Stock Exchange of India and National Securities Depository Limited.

Small Industries Development Bank of India (SIDBI) is the apex regulatory body for overall licensing and regulation of micro, small and medium enterprise finance companies in India. It is under the jurisdiction of Ministry of Finance, Government of India headquartered at Lucknow and having its offices all over the country. Its purpose is to provide refinance facilities to banks and financial institutions and engage in term lending and working capital finance to industries, and serves as the principal financial institution in the Micro, Small and Medium Enterprises (MSME) sector. SIDBI also coordinates the functions of institutions engaged in similar activities. It was established on 2 April 1990, through an Act of Parliament. It is headquartered in Lucknow. SIDBI is one of the four All India Financial Institutions regulated and supervised by the Reserve Bank of India; other three are India Exim Bank, NABARD and NHB. But recently NHB came under government control by taking more than 51% stake. They play a statutory role in the financial markets through credit extension and refinancing operation activities and cater to the long-term financing needs of the industrial sector.

A Non-Banking Financial Company (NBFC) is a company registered under the Companies Act, 1956 of India, engaged in the business of loans and advances, acquisition of shares, stock, bonds, hire-purchase insurance business or chit-fund business, but does not include any institution whose principal business is that of agriculture, industrial activity, purchase or sale of any goods or providing any services and sale/purchase/construction of immovable property.

Yes Bank Limited is an Indian private sector bank headquartered in Mumbai, India and was founded by Rana Kapoor and Ashok Kapur in 2004.

Santander UK plc is a British bank, wholly owned by the Spanish Santander Group. Santander UK plc manages its affairs autonomously, with its own local management team, responsible solely for its performance.

IIFL Holdings Limited d/b/a IIFL and India Infoline, is an Indian diversified financial services company headquartered in Mumbai. The organisation was founded by Nirmal Jain. IIFL and its group companies are backed by Canadian investor Prem Watsa, private equity firm General Atlantic and CDC Group, the UK Government's private equity arm. IIFL is ranked among the top seven financial conglomerates in India and as the top independent financial services firm in India in terms of market capitalisation. Nirmal Jain is the chairman of the group, while R Venkataraman is the group managing director and co-promoter.

Operation Red Spider was an anti-money laundering sting operation of an online magazine, Cobrapost. Cobrapost released video footage, recorded largely by hidden cameras, showing high-ranking officials and some employees of the top three Indian banks suggesting to an undercover reporter methods to launder money. The officials offered safe deposit lockers to stash away the black money, accounts that did not adhere to Reserve Bank of India guidelines, and 'benami' (false) accounts to facilitate the conversion of the black money and keep the depositor's identity a secret. The editor of Cobrapost, Aniruddha Bahal, placed the video footage into the public domain on 14 March 2013.

Cobrapost is a non-profit Indian news website that was founded in 2005 by Aniruddha Bahal – the co-founder of Tehelka. It is particularly known for its undercover investigative journalism.

Payments banks is an Indian new model of banks conceptualised by the Reserve Bank of India (RBI) without issuing credit. These banks can accept a restricted deposit, which is currently limited to ₹200,000 per customer and may be increased further. These banks cannot issue loans and credit cards. Both current account and savings accounts can be operated by such banks. Payments banks can issue ATM cards or debit cards and provide online or mobile banking. Bharti Airtel set up India's first payments bank, Airtel Payments Bank.

V. Vaidyanathan is MD and CEO of IDFC First Bank Ltd Before this entrepreneurial foray at 42, he was the MD and CEO of ICICI Prudential Life Insurance, and was earlier on the Board of ICICI bank.

Tata Capital Limited is a financial and investment service provider in India. The company is based in Mumbai and has more than 100 branches across the country. The firm offers consumer loans, wealth management, commercial finance, and infrastructure finance, among others.