Hindustan Aeronautics Limited (HAL) is an Indian state-owned aerospace and defence company headquartered in Bangalore (Bengaluru), India. It is governed under the management of the Indian Ministry of Defence.

The government-owned corporation is primarily involved in the operations of the aerospace and is currently involved in the design, fabrication and assembly of aircraft, jet engines, helicopters and their spare parts. It has several facilities spread across India including Bangalore, Nasik, Korwa, Kanpur, Koraput, Lucknow, Hyderabad and Kasaragod. The HAL HF-24 Marut fighter-bomber was the first fighter aircraft made in India.

HAL was established as Hindustan Aircraft Limited in Bangalore on 23 December 1940 by Walchand Hirachand who became Chairman of the company. The company's office was opened at a bungalow called "Eventide" on Domlur Road.

The organisation and equipment for the factory at Bangalore was set up by William D. Pawley of the Intercontinental Aircraft Corporation of New York. Pawley obtained a large number of machine-tools and equipment from the United States.

The Indian Government bought a one-third stake in the company and by April 1941 by investing 25 lakhs as it believed this to be a strategic imperative. The decision by the government was primarily motivated to boost British military hardware supplies in Asia to counter the increasing threat posed by Imperial Japan during Second World War. The Kingdom of Mysore supplied two directors, Air Marshal John Higgins was resident director. The first aircraft built was a Harlow PC-5 [6] On 2 April 1942, the government announced that the company had been nationalised when it had bought out the stakes of Seth Walchand Hirachand and other promoters so that it could act freely. The Mysore Kingdom refused to sell its stake in the company but yielded the management control over to the Indian Government.

The total number of broad- gauge coaches manufactured by the Hindustan Aircraft Limited during the year 1954 is 158. [7]

In 1943 the Bangalore factory was handed over to the United States Army Air Forces but still using Hindustan Aircraft management. The factory expanded rapidly and became the centre for major overhaul and repair of American aircraft and was known as the 84th Air Depot. The first aircraft to be overhauled was a Consolidated PBY Catalina followed by every type of aircraft operated in India and Burma. When returned to Indian control two years later the factory had become one of the largest overhaul and repair organisations in the East. In the post war reorganisation the company built railway carriages as an interim activity.

After India gained independence in 1947, the management of the company was passed over to the Government of India.

Hindustan Aeronautics Limited (HAL) was formed on 1 October 1964 when Hindustan Aircraft Limited joined the consortium formed in June by the IAF Aircraft Manufacturing Depot, Kanpur (at the time manufacturing HS748 under licence) and the group recently set up to manufacture MiG-21 under licence, with its new factories planned in Koraput, Nasik and Hyderabad. [8] Though HAL was not used actively for developing newer models of fighter jets, except for the HF-24 Marut, the company has played a crucial role in modernisation of the Indian Air Force. In 1957 company started manufacturing Bristol Siddeley Orpheus jet engines under licence at new factory located in Bangalore.

During the 1980s, HAL's operations saw a rapid increase which resulted in the development of new indigenous aircraft such as the HAL Tejas and HAL Dhruv. HAL also developed an advanced version of the Mikoyan-Gurevich MiG-21, known as MiG-21 Bison, which increased its life-span by more than 20 years. HAL has also obtained several multimillion-dollar contracts from leading international aerospace firms such as Airbus, Boeing and Honeywell to manufacture aircraft spare parts and engines.

By 2012, HAL was reportedly bogged down in the details of production and has been slipping on its schedules. [9] On 1 April 2015, HAL reconstituted its Board with TS Raju as CMD, S Subrahmanyan as Director (Operations), VM Chamola as Director (HR), CA Ramana Rao as Director (Finance) and D K Venkatesh as Director (Engineering & R&D). There are two government nominees in the board and six independent directors.

In March 2017, HAL Chairman and Managing Director T Suvarna Raju announced that the company had finalised plans for an indigenisation drive. The company plans to produce nearly 1, 000 military helicopters, including Kamov 226, LCH (Light Combat Helicopter) ALH (Advanced Light Helicopter), and over 100 planes over the next 10 years. HAL will manufacture the Kamov 226T helicopter under a joint venture agreement with Russian defence manufacturers. The Kamov 226T will replace the country's fleet of Cheetah and Chetak helicopters. Over the next 5 years, HAL will carry out major upgrade of almost the entire fighter fleet of Indian Air Force including Su-30MKI, Jaguars, Mirage and Hawk jets to make them "more lethal". The company will also deliver 123 Tejas Light Combat Aircraft to the IAF from 2018–19, at a rate of 16 jets per year. [10] LCH production will now take place in a newly built Light Combat Helicopter Production Hangar at Helicopter Division in HAL Complex. [11]

In view of Make in India policy and to increase the share of defence exports to achieve the target of $5 billion dollars by 2025, HAL is planning to setup logistic bases in Indonesia, Malaysia, Sri Lanka and Vietnam with priority target for Southeast Asia, West Asia and North African markets. It would not only help to promote HAL products but also act as service centre for Soviet/Russian origin equipment. [12]

One of the largest aerospace companies in Asia, HAL has annual turnover of over US$2 billion. More than 40% of HAL's revenues come from international deals to manufacture aircraft engines, spare parts, and other aircraft materials. A partial list of major operations undertaken by HAL includes the following:

The Indian Air Force (IAF) is the air arm of the Indian Armed Forces. Its complement of personnel and aircraft assets ranks fourth amongst the air forces of the world. Its primary mission is to secure Indian airspace and to conduct aerial warfare during armed conflict. It was officially established on 8 October 1932 as an auxiliary air force of the British Empire which honoured India's aviation service during World War II with the prefix Royal. After India gained independence from the United Kingdom in 1947, the name Royal Indian Air Force was kept and served in the name of Dominion of India. With the government's transition to a Republic in 1950, the prefix Royal was removed.

The HAL Tejas is an Indian single-engine, delta wing, fourth-generation fighter jet, multirole light fighter designed by the Aeronautical Development Agency (ADA) and Hindustan Aeronautics Limited (HAL) for the Indian Air Force and Indian Navy. It came from the Light Combat Aircraft (LCA) programme, which began in the 1980s to replace India's ageing MiG-21 fighters. In 2003, the LCA was officially named "Tejas".

The HAL Dhruv is a utility helicopter designed and developed by Rotary Wing Research and Design Center (RWR&DC) one of the R&D sections of Hindustan Aeronautics Limited (HAL). The development of the Dhruv was first announced in November 1984, and it was subsequently designed with assistance from MBB in Germany. The helicopter first flew in 1992; however, its development was prolonged due to multiple factors including the Indian Army's requirement for design changes, budget restrictions, and sanctions placed on India following the 1998 Pokhran-II nuclear tests.

The HAL HF-24 Marut was an Indian fighter-bomber aircraft of the 1960s. Developed by Hindustan Aircraft Limited (HAL), with Kurt Tank as lead designer. It is the first Indian-developed jet aircraft, and the first Asian jet fighter to go beyond the test phase and into successful production and active service. On 17 June 1961, the type conducted its maiden flight; on 1 April 1967, the first production Marut was officially delivered to the IAF.

The HAL HJT-36 Sitara is a subsonic intermediate jet trainer aircraft developed by Hindustan Aeronautics Limited (HAL) for the Indian Air Force and the Indian Navy. The HJT-36 will replace the HAL HJT-16 Kiran as the Stage-2 trainer for the two forces.

Sarang is the helicopter air display team of the Indian Air Force that flies four modified HAL Dhruv helicopters, also known as Advanced Light Helicopter (ALH). The team was formed in October 2003 and their first performance was at the Asian Aerospace show, Singapore, in 2004. The name Sarang is symbolic; the peacock is the national bird of India. The unit was inducted as No. 151 Helicopter Unit in 2005 and was shifted from Yelahanka AFS, Bangalore to Sulur AFS, Coimbatore in 2009.

Aero India is a biennial air show and aviation exhibition held in Bengaluru, India at the Yelahanka Air Force Station. It is organised by the Defence Exhibition Organisation, Ministry of Defence. 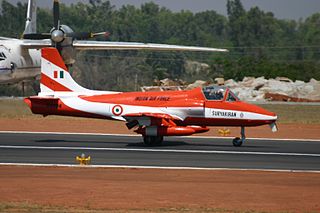 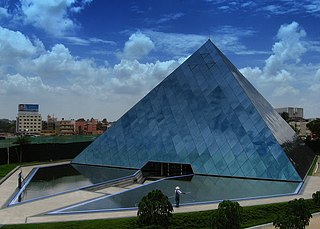 The Economy of Bengaluru is an important part of the economy of India as a whole and contributes over 87% to the Economy of the State of Karnataka, accounting for 98% of the Software Exports of the State.

The Indian Naval Air Arm is aviation branch and the important fighting arm of the Indian Navy which is tasked to provide an aircraft carrier based strike capability, fleet air defence, maritime reconnaissance, and anti-submarine warfare.

The HAL Light Combat Helicopter (LCH) is a multi-role combat helicopter designed and developed by Rotary Wing Research and Design Center (RWR&DC) and manufactured by Hindustan Aeronautics Limited (HAL). It has been ordered for both the Indian Air Force and the Indian Army. The type is also intended to be sold upon the export market, since 2015, HAL has been seeking other customers for the LCH.

Hindustan is a term currently used as an endonym for the modern day Republic of India, and historically used for parts of the subcontinent. 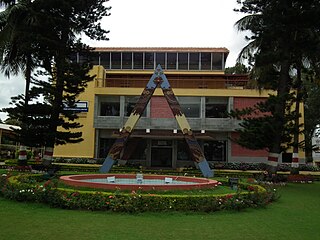 HAL Aerospace Museum is India's first aerospace museum located at Hindustan Aeronautics Limited premises, in Bangalore. Established in 2001, the Museum is part of the HAL Heritage Centre and Aero Space Museum, and showcases the growth of the Indian aviation industry and HAL for six decades. The museum houses displays of various aircraft and helicopters, Aircraft engine models, Flight simulators, a mock Air Traffic Control Tower and exhibit of Indian aviation history. The Museum is maintained by HAL.

The Indian Air Force has been undergoing a modernization program to replace and upgrade its aging and outdated equipment since the late 90s to advanced standards. For that reason it has started procuring and developing aircraft, weapons, associated technologies, and infrastructures. Some of these programs date back to the late 80s. The primary focus of current modernization and upgrades is to replace aircraft purchased from the Soviet Union that currently form the backbone of the Air Force.

The HAL HTT-40 is an Indian training aircraft, designed and built by Hindustan Aeronautics Limited (HAL). It will replace the Indian Air Force's retired HPT-32 Deepak as a basic trainer. 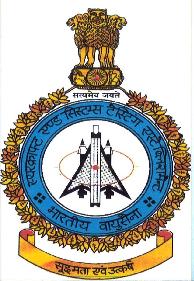 The Indian Air Force Test Pilot School is a unit of the Indian Air Force (IAF) that evaluates aircraft and systems for induction into user organisations. Most new aircraft types and major airborne systems must have ASTE's stamp of approval to be considered fit for service in India. While many countries have testing facilities of one kind or the other, training of flight test personnel is not often imparted in them. ASTE's Air Force Test Pilots School (AFTPS) is only the fifth such institution in the world.

The HAL Tejas Mark 2, or Medium Weight Fighter or HAL MWF, is a planned single-engine, delta wing, multirole fighter designed by the Aeronautical Development Agency (ADA) and Hindustan Aeronautics Limited (HAL) for the Indian Air Force (IAF). It is a further development of the HAL Tejas, or Light Combat Aircraft (LCA), programme which began in the 1980s to replace India's ageing MiG-21 fighters. The Tejas Mk 2 is being designed to replace multiple strike-fighters like SEPECAT Jaguars, Dassault Mirage-2000 & MiG-29 of Indian Air Force.