Manningtree is a town and civil parish in the Tendring district of Essex, England, which lies on the River Stour. It is part of the Suffolk Coast and Heaths Area of Natural Beauty. [2]

In April 2009 it was proposed that Manningtree should merge with Mistley and Lawford to form a single parish, losing its separate identity as a town. [6] As of 2018 such a merger has not occurred.

The name Manningtree is thought to derive from 'many trees'. [7] The town grew around the wool trade from the 15th century until its decline in the 18th century and also had a thriving shipping trade in corn, timber and coal until this declined with the coming of the railway. [7] Manningtree is known as the centre of the activities of Matthew Hopkins, the self-appointed Witchfinder General, who claimed to have overheard local women discussing their meetings with the devil in 1644 with his accusations leading to their execution as witches. [7]

Many of the buildings in the centre of the town have Georgian facades which obscure their earlier origins. Notable buildings include the town's library, which was originally built as 'a public hall for the purposes of corn exchange' and was later used around 1900 for public entertainment, [7] and the oldest Methodist church in Essex, located on South Street.

The Ascension, by John Constable, which now hangs in Dedham church, was commissioned in 1821 for the altarpiece of the early seventeenth century church on the High Street, demolished in 1967.

Manningtree is part of the electoral ward called Manningtree, Mistley, Little Bentley and Tendring. The population of this ward at the 2011 census was 4,603. [8]

Manningtree is on Holbrook Bay, part of the River Stour in the north of Essex. It is the eastern edge of Dedham Vale.

Nearby villages include Dedham, Mistley, Lawford, Wrabness and Brantham.

Manningtree railway station is on the Great Eastern Main Line and provides regular, direct services to London, Norwich and Harwich.

A.K. Blakemore's 2021 novel, The Manningtree Witches, is set in the town. [11] The novel won the Desmond Elliott Prize 2021, being described by the judges as "a stunning achievement." [12]

The River Stour is a river in East Anglia, England. It is 47 miles (76 km) long and forms most of the county boundary between Suffolk to the north, and Essex to the south. It rises in eastern Cambridgeshire, passes to the east of Haverhill, through Cavendish, Bures, Sudbury, Nayland, Stratford St Mary, Dedham and flows through the Dedham Vale Area of Outstanding Natural Beauty. It becomes tidal just before Manningtree in Essex and joins the North Sea at Harwich.

Matthew Hopkins was an English witch-hunter whose career flourished during the English Civil War. He claimed to hold the office of Witchfinder General, although that title was never bestowed by Parliament, and was mainly active in East Anglia. 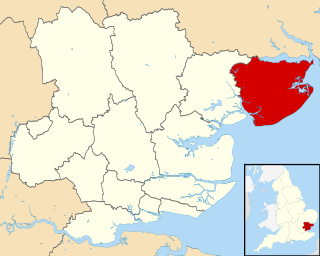 Tendring is a local government district in north east Essex, England. It extends from the River Stour in the north, to the coast and the River Colne in the south, with the coast to the east and the town of Colchester to the west. Its council is based in Clacton-on-Sea. Towns in the district include Frinton-on-Sea, Walton-on-the-Naze, Brightlingsea and Harwich. Large villages in the district include St Osyth and Great Bentley.

Fordwich is a market town and a civil parish in east Kent, England, on the River Stour, northeast of Canterbury.

Lawford is a large village and civil parish in the Tendring district of northeast Essex, England. It is approximately 6 miles (10 km) northeast from the centre of Colchester and west of, and contiguous with, Manningtree. Mistley merges with the east side of Manningtree.

North Essex was a parliamentary constituency represented in the House of Commons of the Parliament of the United Kingdom between 1997 and 2010. It elected one Member of Parliament (MP) by the first past the post system of election.

Brantham is a village and civil parish in the Babergh district of Suffolk, England. It is located close to the River Stour and the border with Essex, around 2 miles (3 km) north of Manningtree, and around 9 miles (14 km) southwest of Ipswich.

Bradfield is a village and civil parish in Essex, England. It is located about 3 miles (5 km) east of Manningtree and is 31 miles (50 km) northeast from the county town of Chelmsford. The village is in the district of Tendring and the parliamentary constituency of North Essex. There is a Parish Council. The 2001 National Census recorded a population of 1,094, rising to 1,112 at the 2011 Census.

Harwich and North Essex is a constituency represented in the House of Commons of the UK Parliament by Bernard Jenkin of the Conservative Party since its creation in 2010.

Tendring is a village and civil parish in Essex. It gives its name to the Tendring District and before that the Tendring Hundred. Its name was given to the larger groupings because it was at the centre, not because it was larger than the other settlements. In 2011 the parish had a population of 736 and the district had a population of 138,048. The linear village straddles the B1035 from Manningtree to Thorpe-le-Soken.

Wix is a village and civil parish in the Tendring district of north-east Essex, England. It lies in a small valley about 2 miles (3 km) south of the Stour Estuary. The valley drains east towards Harwich. Formerly an important crossroads on the route to Harwich, it has now been bypassed by the A120 road.

Little Bromley is a village and civil parish in the Tendring district of Essex, England. The name "Bromley" is Old English for "broomy wood/clearing". The village lies 9 kilometres (6 mi) east northeast of Colchester and 3 kilometres (2 mi) south of Manningtree. It is surrounded by the parishes of Lawford, Ardleigh, Great Bromley, Little Bentley, and Mistley. Its area is about 7.5 square kilometres. The population was reported to be 426 in the 1841 census, 361 in the 1911 census, 289 in the 2001 census, and 253 in the 2011 census. The main economic activity is arable farming. The village shop, mentioned in Kelly's Directory of Essex (1914), ceased operating in the 1990s.

Mistley is a large village and civil parish in the Tendring district of northeast Essex, England. It is around 11 miles northeast of Colchester and is east of, and almost contiguous with, Manningtree. The parish consists of Mistley and New Mistley, both lying beside the Stour Estuary, and Mistley Heath a kilometre to the south. Mistley railway station serves Mistley on the Mayflower Line.

North Colchester was a Borough Constituency in Essex, represented in the House of Commons of the Parliament of the United Kingdom from 1983 until 1997. It elected one Member of Parliament (MP) by the first past the post system of election.

Mistley railway station is on the Mayflower Line, a branch of the Great Eastern Main Line in the East of England, serving the village of Mistley, Essex. It is 61 miles 14 chains (98.45 km) down the line from London Liverpool Street and is situated between Manningtree to the west and Wrabness to the east. Its three-letter station code is MIS.

Dedham is a village within the borough of Colchester in northeast Essex, England, on the River Stour and the border of Essex and Suffolk. The nearest town to Dedham is the small market town of Manningtree.

Wrabness is a small village and civil parish near Manningtree, Essex, England. The village is located six miles (10 km) west of Harwich. Wrabness railway station is served by trains on the Mayflower Line. Wrabness had a population of approximately 400.

Wikimedia Commons has media related to Manningtree .
This page is based on this Wikipedia article
Text is available under the CC BY-SA 4.0 license; additional terms may apply.
Images, videos and audio are available under their respective licenses.