Monday Night Baseball is a live game telecast of Major League Baseball that airs most Monday nights during the regular season on ESPN. The official name of the game is Monday Night Baseball presented by USAA . The game starts at 7 p.m. ET, following SportsCenter , and usually lasts around three hours leading up to an hour-long Baseball Tonight . The program sometimes airs on ESPN2 rather than ESPN, often due to NBA playoff coverage in April and May, and preseason Monday Night Football coverage in August.

Several things changed to Monday Night Baseball in the eight year television contract that ESPN signed with Major League Baseball on September 14, 2005. Unlike Sunday Night Baseball, the game is non-exclusive, meaning it will co-exist with the teams' local carriers. However, Monday Night Baseball will be allowed to co-exist with local carriers up to three times per club, per year. Beyond that, telecasts will be blacked out in the participating teams' markets (Baseball Tonight is shown in its entirety, beginning at 10:00, with the rest of the nation joining after the game).

Beginning in 2007, there was expected to be an afternoon "batting practice" program generally from the site of the Monday Night Baseball game (similar to the pre-game shows for ESPN's NFL coverage). That program was scheduled to debut on April 9, 2007, at 4 p.m. Eastern time, before the New York Yankees-Minnesota Twins game. However, no batting practice show appeared for reasons that were not explained. Later, ESPN announced that it would also scale back its on-site presence for NFL games.

In the past, the Monday night team would broadcast on Friday night during the NFL season instead of irony for the Wednesday night doubleheader format.

In 2021, ESPN agreed to a new contract with Major League Baseball through the 2028 season. However, the deal included only around 30 exclusive broadcasts, most of which would take place on Sunday Night Baseball. [1] Thus, it is likely that Monday Night Baseball may move to another network in the foreseeable future, or rebrand as part of the MLB Network Showcase package.

A complete list of broadcasters, with their period of tenure on the show (beginning years of each season shown).

Gwynn was not available to cover early season games due to the fact that he was also the head baseball coach at San Diego State University.

On May 10, 2006, after a long day of drinking and golfing with comedian Bill Murray, MNB analyst Rick Sutcliffe attended a night game between the San Diego Padres and Milwaukee Brewers in San Diego. He was invited to the booth with 4SD broadcasters Mark Grant and Matt Vasgersian where he began a rambling and incoherent interview by saying, "It ain't that busy, it ain't that busy." He then rambled on about off-the-wall subjects such as George Clooney and his daughter's "mission." After he asked Matt Vasgersian what he was still doing in San Diego, his microphone was finally cut off.

As a result, he apologized and ESPN suspended Sutcliffe for one game the next week. [2]

Monday Night Baseball on other networks

Because of the Covid-19 pandemic leading to a shortened 2020 Major League Baseball season FS1 aired 6 Monday night baseball games. These games aired at separate times as games on ESPN but, in some cases, aired on the same days. FS1 aired 1 Monday night game in 2021.

From 1972 – 1975 NBC [3] televised Monday games under a contract worth $72 million. In 1973, NBC extended the Monday night telecasts to 15 straight (with a local blackout). September 1, 1975 saw NBC's last Monday Night Baseball game, in which the Montréal Expos beat the Philadelphia Phillies 6–5.

Curt Gowdy called the Monday night games with Tony Kubek from 1972 to 1974, the pair being joined in 1973 and 1974 by various guest commentators from both in and out of the baseball world. Jim Simpson and Maury Wills called the secondary backup games. Joe Garagiola hosted NBC's pregame show, The Baseball World of Joe Garagiola, and teamed with Gowdy to call the games in 1975.

ABC would pick up the television rights for Monday Night Baseball [4] games in the following year. Just like with Monday Night Football , ABC brought in the concept of the three-man-booth (originally composed of Bob Prince, Bob Uecker, and Warner Wolf as the primary crew) to their baseball telecasts.

Ratings were typically poor for ABC's Monday night games, and by 1986, ABC only televised 13 Monday Night Baseball games. This was a fairly sharp contrast to the 18 games to that were scheduled in 1978. The Sporting News suggested that ABC paid Major League Baseball to not make them televise the regular season, opining that the network only wanted the sport for October anyway. For most of its time on ABC, the Monday night games were held on "dead travel days" when few games were scheduled. The team owners liked that arrangement, as the ABC games didn't compete against their stadium box offices and local telecasts. The network, on the other hand, found the arrangement far more complicated; ABC often had only one or two games to pick from for each telecast from a schedule designed by Major League Baseball. While trying to give all of the teams national exposure, ABC ended up with a surplus of games involving games between either small-market teams and/or teams with losing records.

In 1989 (the final year of ABC's contract with Major League Baseball), ABC moved the baseball telecasts to Thursday nights in hopes of getting a leg up against NBC's Cosby Show . The network also aired some late-season games on Sunday afternoons.

The FX cable channel aired Monday night games in 1997. The series returned in 2002 as ESPN (which, like ABC by that point, was owned by The Walt Disney Company) created a package under its deal for national cable rights. 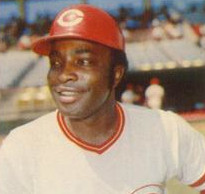 Joe Leonard Morgan was an American professional baseball second baseman who played Major League Baseball (MLB) for the Houston Astros, Cincinnati Reds, San Francisco Giants, Philadelphia Phillies, and Oakland Athletics from 1963 to 1984. He won two World Series championships with the Reds in 1975 and 1976 and was also named the National League Most Valuable Player (MVP) in each of those years. Considered one of the greatest second basemen of all-time, Morgan was inducted into the Baseball Hall of Fame in 1990.

Major League Baseball (MLB) has been broadcast on television since the 1930s, with initial broadcasts on the experimental station W2XBS, the predecessor of the modern WNBC in New York. The World Series was televised on a networked basis since 1947, with regular season games broadcast nationally since 1953. Over the forthcoming years, MLB games became major attractions for American television networks, and each of the Big Three networks would air packages of baseball games until the year 2000; Fox would rise to major network status, partially on its acquisition of MLB rights. MLB broadcasts would later shape the emerging medium of cable television, in particular, out of market baseball would attract customers to superstations such as WGN and WTBS and play a big role in the growth of ESPN. Currently, rights to nationally televised MLB games are held by several groups, namely ESPN, Fox Sports, Turner Sports, and YouTube. Each team also has its own regional broadcasters that air games not picked up by one of the national outlets.

Wednesday Night Baseball is a live game telecast of Major League Baseball that airs every Wednesday night during the regular season on ESPN. The game starts at 7pm ET, following SportsCenter, and usually lasts around three hours with an hour-long Baseball Tonight following the game leading up to the 11pm ET SportsCenter. Every April some broadcasts air on ESPN2 due to ESPN's priority with Wednesday's NBA coverage.

The Major League Baseball Game of the Week (GOTW) is the de facto title for nationally televised coverage of regular season Major League Baseball games. The Game of the Week has traditionally aired on Saturday afternoons. When the national networks began televising national games of the week, it opened the door for a national audience to see particular clubs. While most teams were broadcast, emphasis was always on the league leaders and the major market franchises that could draw the largest audience.

Sunday Night Baseball is an exclusive weekly telecast of a Major League Baseball game that airs Sunday nights at 7:00 p.m. EDT on ESPN during the regular season.

The following is a list of announcers who called Major League Baseball telecasts for the joint venture between Major League Baseball, ABC and NBC called The Baseball Network. Announcers who represented each of the teams playing in the respective games were typically paired with each other on regular season Baseball Night in America telecasts. ABC used Al Michaels, Jim Palmer, Tim McCarver and Lesley Visser as the lead broadcasting team. Meanwhile, NBC used Bob Costas, Joe Morgan, Bob Uecker and Jim Gray as their lead broadcasting team. 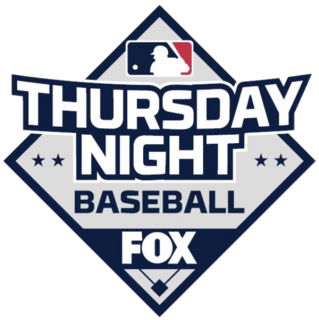 On December 14, 1988, CBS paid approximately $1.8 billion for exclusive television rights for over four years. CBS paid about $265 million each year for the World Series, League Championship Series, All-Star Game, and the Saturday Game of the Week. It was one of the largest agreements between the sport of baseball and the business of broadcasting.

By 1969, Major League Baseball had grown to 24 teams and the net local TV revenues had leaped to $20.7 million. This is in sharp contrast to 1950 when local television brought the then 16 Major League clubs a total net income of $2.3 million. Changes baseball underwent during this time, such as expansion franchises and increasing the schedule from 154 games to 162, led to a wider audience for network and local television.