Neal Smith (born September 23, 1947) is an American musician, best known as the drummer for the rock group Alice Cooper from 1967 to 1974. He performed on the group's early albums Pretties for You and Easy Action , their breakout album Love It to Death and the subsequent successful albums Killer , School's Out , and Billion Dollar Babies . The last new studio album with the five original Alice Cooper group members participating in new music was Muscle of Love in 1973. The original group's Greatest Hits studio album was released in 1974. In 2018 (fifty years after the original group debuted its new group name Alice Cooper in 1968), a live performance album Live from the Astroturf recorded in 2015 was released, featuring four of the original group members performing eight of their hit songs, with long-time Alice Cooper solo band guitarist and friend Ryan Roxie interplaying lead guitar parts with original group rhythm guitarist Michael Bruce, on behalf of original group lead guitarist Glen Buxton, who died in 1997 of pneumonia three weeks before his 50th birthday.

In 2011, Smith was inducted into the Rock and Roll Hall of Fame, in the "Performer" category, as a member of the original Alice Cooper group. [1]

Smith graduated in 1965 from Camelback High School in Phoenix, while three of his Alice Cooper band members graduated from Cortez High School and one from North High School. Smith talks about his high school in the song "Alma Mater" sung by Alice Cooper. Neal Smith's drum part on the title track of Billion Dollar Babies is considered one of the most original and dynamic amongst musicians and fans of the group.

Billion Dollar Babies was also the name of the band founded by former Alice Cooper group musicians Michael Bruce, Dennis Dunaway and Neal Smith along with Bob Dolin and Mike Marconi after they split from Alice Cooper in 1974. This band was embroiled in a legal suit over the usage of the name. They released only one album, 1977's Battle Axe, before disbanding.

Smith has been selling real estate in New England since the early 1980s. He is also still active in music, and performed with Alice Cooper during a show in 1998. In 1999, he released his first solo album, Platinum God, recorded in 1975. He is also currently the drummer/percussionist and songwriter for Bouchard, Dunaway & Smith (BDS), composed of Smith, former Blue Öyster Cult bassist Joe Bouchard, and original Alice Cooper bassist Dennis Dunaway. The band has co-written songs with Ian Hunter. BDS has released two albums: 2001's Back From Hell, and 2003's BDS Live In Paris. Smith has also released two albums under the group name Cinematik, with guitarist Robert Mitchell and bassist Peter Catucci, produced by Rob Fraboni. Cinematik has a loose, jam-laden world-beat sound, as opposed to BDS's more classic-rock sound.

Smith has also recorded with Buck Dharma of Blue Öyster Cult ( Flat Out , 1982), Plasmatics ( Beyond the Valley of 1984 , 1981), and Deadringer (Electrocution of the Heart, 1989). Neal played on Bruce Cameron's CD Midnight Daydream along with an all-star cast of Jack Bruce, Buddy Miles, Billy Cox, Mitch Mitchell, Harvy Dalton Arnold and Ken Hensley. Neal Smith also has an industrial rock project called Killsmith. [2] Killsmith's sophomore release underway makes Neal Smith set to be the first member of the original Alice Cooper Group to have a project of original material released after the group's induction to the Rock 'n' Roll Hall of Fame. [3]

On July 1, 2010 when talking about the newly retitled album, Welcome 2 My Nightmare , Alice Cooper said in a Radio Metal interview: "We’ll put some of the original people on it and add some new people, I’m very happy with working with Bob (Ezrin) again." Musicians who appeared on the album included Rob Zombie, Vince Gill, Steven Hunter and Dick Wagner. Smith, Dennis Dunaway and Michael Bruce played on 3 songs on Welcome 2 My Nightmare. Smith co-wrote the song "I'll Bite Your Face Off" from the album.

He featured on two tracks on Cooper's 2021 album Detroit Stories.

Billion Dollar Babies is the sixth studio album by American rock band Alice Cooper, released on February 25, 1973 by Warner Bros. Records. The album became the best selling Alice Cooper record at the time of its release, hit number one on the album charts in both the United States and the United Kingdom, and went on to be certified platinum by the Recording Industry Association of America. The album has been retrospectively praised by such critics as Robert Christgau, Greg Prato of AllMusic, and Jason Thompson of PopMatters, but The Rolling Stone Album Guide (2004) gave the album only two and a half stars.

Michael Owen Bruce is an American musician. He is the co-founder, rhythm guitarist, keyboardist and co-lead vocalist for the rock band Alice Cooper.

Glen Edward Buxton was an American musician, best known as the lead guitarist for the rock band Alice Cooper. In 2003, Rolling Stone magazine ranked him number 90 on its list of the "100 Greatest Guitarists of All Time". In 2011, Buxton was posthumously inducted into the Rock and Roll Hall of Fame as a member of the original Alice Cooper group. 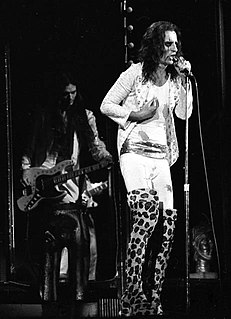 Muscle of Love is the seventh and final studio album by rock band Alice Cooper. It was released in late 1973, the band played its last concert a few months later.

Love It to Death is the third studio album by American rock band Alice Cooper, released on March 9, 1971. It was the band's first commercially successful album and the first album that consolidated the band's aggressive hard-rocking sound. The album's best-known track, "I'm Eighteen", was released as a single to test the band's commercial viability before the album was recorded.

Pretties for You is the debut studio album by American rock band Alice Cooper, released on June 25, 1969, by Straight Records. At this time, the name "Alice Cooper" referred to the band and not its lead singer Vincent Furnier. The album has a psychedelic flavor to it; the group had yet to develop the more concise hard rock sound that they would become famous for. Most of the tracks feature unusual time signatures and arrangements, jarring syncopation, expressive dynamics, sound effects, and an eclectic range of music influences. A few songs, such as "Levity Ball", show the influence of Syd Barrett-era Pink Floyd, with whom the band hung out during the British group's U.S. tour. Alice Cooper guitarist Glen Buxton stated he could listen to Barrett's guitar playing for hours on end.

Albert Thomas Bouchard is an American drummer, guitarist, singer and songwriter. He is a founding member of the American hard rock band Blue Öyster Cult and current drummer of The Dictators.

Bruce Cameron was an American guitarist who managed to attract a number of famous rock-and-roll musicians to record his 1999 debut and only album, Midnight Daydream, released by Brain Cell Records.

Ant-Bee is an American experimental musician and writer. In his musical work, he is a psychedelic era revivalist, working with members of The Mothers of Invention; the original members of the Alice Cooper group, and Captain Beefheart's Magic Band.

"Elected" is a single by rock band Alice Cooper, released as the first Hot 100 hit on their sixth studio album Billion Dollar Babies (1972). The single reached number 26 during election week on the charts in the United States, number 4 on the charts in the United Kingdom and number 3 in Austria. The promotional music video was directed by Hart Perry.

"Reflected" is a song by American rock band Alice Cooper, released in 1969 as the first single from their debut album Pretties for You.