Nights with Alice Cooper is a radio show hosted by Detroit born rock and roll artist and shock rock pioneer Alice Cooper. It is syndicated by United Stations Radio Networks and broadcast on a wide variety of affiliate radio stations in the United States, Canada, the United Kingdom, Australia, New Zealand, and Europe. [1] The most recent show is also streamed online in a continuous loop by Radionomy; this stream is also used for the official Nights with Alice Cooper app for iOS and Android, which additionally offers "exclusive content" as well as interaction with other fans. [2]

During the program Cooper plays requests as well as his favorite songs (most of which are from the classic rock genre), answers emails from his fans, and interviews celebrities. Celebrities he has interviewed on his show include Joe Perry of Aerosmith, Brian Johnson of AC/DC, Ozzy Osbourne, Meat Loaf, Rob Zombie, Glenn Danzig, Def Leppard, Peter Frampton and Jerry Springer. The show also plays rare tracks from classic rock artists, along with blues, early punk rock, and psychedelic music.

In 2005, The Guardian described the program as "a distinctive music show... Cooper makes an entertaining host with some unique one-liners". [3]

The show debuted on January 26, 2004 on 16 stations, including its flagship station, KDKB in Phoenix, Arizona (later moved to sister station KSLX-FM following its switch to alternative rock).

Holidays are big events on Nights with Alice Cooper, especially Halloween. The radio show has offered numerous contests and giveaways, including a flyaway trip to see Cooper in concert; a trip to see Led Zeppelin in London; and in October 2008, the giveaway of a signed ESP guitar. Alice is also a huge trivia buff, and gives away signed pairs of his own pants to listeners who correctly answer his questions, which mostly relate to rare rock or movie trivia.

The show is also known for Cooper's humorous self-deprecating one-liner outros to commercial breaks: An announcer often tells Cooper's listeners that they are listening to (among many things) "a man for whom even Dr. Phil has no cure", "a man who is not afraid to look like a fool--and demonstrates so regularly", and, possibly most famously, "a man with a face made for radio", and other things mocking and/or questioning Cooper's intelligence, wisdom, talent, career, activities, looks, etc. in such ways.

In the early days of the show, the program featured several scripted comedy skits which centered around Alice and his life and were written by Kristine "Kiki" Valentine Rakowsky who played Alice's counterpart Mistress Kitty on the show. Many of these featured Alice getting into arguments with rock musicians who asked Cooper for money he allegedly owed them for shows. These arguments would ultimately result in Cooper getting beaten senseless by the artists, who would often yell "and THIS is for making fun of RUSH!" (which was a common joke of Cooper's at the time.)

Absolute Classic Rock is a Semi-National Digital radio station owned and operated by Bauer as part of the Absolute Radio Network. Its music output is non-stop classic rock hits.

Grant Broadcasters is an Australian regional radio network that also includes a small number of metropolitan radio stations. It is a privately owned company, held by Janet Cameron and her family.

KKZX is a classic rock radio station serving the Spokane, Washington, area. The station offers up a steady diet of rock music hits from the 1960s to the early 1990s. In 2015, KKZX experimented with harder and more recent selections to try to compete with active rocker Rock 94 1/2. However, the increasingly crowded rock competition, as well as the audience and listener input was negative towards the harder sound. As of January 2018, KKZX went back to a mix of classic rock, including Aerosmith, The Beatles, Fleetwood Mac, Led Zeppelin and The Rolling Stones, which the station is known for. KKZX also cutback on the grunge rock, as OZ 95.7 cut into the ratings and the creation of the new Alt 96 FM. Personalities on the station includes Jim Arnold, Laura Hall and Jason McCollim. The station is an affiliate of The Beatle Years, Acoustic Storm, Nights with Alice Cooper, and Time Warp. The station broadcasts with an ERP of 100 kW and is owned by iHeartMedia. Streaming live online at its website. Broadcasting in HD.

KHKK and KDJK, known as The Hawk, are a pair of commercial FM radio stations in the Central Valley of California. They are owned by Cumulus Media and they simulcast a classic rock radio format. KHKK is licensed to Modesto and KDJK is licensed to Mariposa. The Hawk carries the syndicated Bob & Tom morning show and during the football season, The Hawk airs Las Vegas Raiders games.

KSLX-FM is a Classic rock radio station serving the Phoenix, Arizona area. The Hubbard Broadcasting, Inc. outlet broadcasts at 100.7 MHz with an ERP of 100 kW and is licensed to Scottsdale, Arizona. KSLX simulcasts in digital HD Radio. Its studios are located on North 52nd Street west of Papago Park and its transmitter is in South Mountain Park.

smoothfm is an Australian commercial radio network owned and operated by NOVA Entertainment. From original launch in 2012, The format was focused on providing 'more music and less talk' along with an eclectic easy-listening playlist, usually featuring ballads. From the launch on Valentine’s Day in February 2020, the station revised genres when the primary channel became a Hot-Adult Contemporary radio station providing feel good and dance music.

WXSS is a Top 40 (CHR) radio station owned by Audacy, Inc., licensed to Wauwatosa, Wisconsin and serving Milwaukee. Its studios are located in Hales Corners. WXSS's tower is located in the Milwaukee "tower farm" complex near Estabrook Park in the northeastern part of the city. 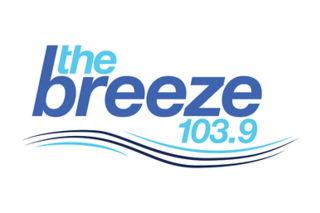 WPBZ-FM is a commercial FM radio station licensed to Rensselaer, New York, and serving the Capital District of New York, including the Albany-Schenectady-Troy radio market. The station is owned by Townsquare Media and airs a soft adult contemporary radio format. The studios and offices are on Kings Road in Schenectady.

KKOB-FM is a commercial FM radio station in Albuquerque, New Mexico. It is owned by Cumulus Media and it simulcasts a News/Talk radio format with co-owned KKOB. The studios and offices are on 4th Street NW in downtown Albuquerque. KKOB-AM-FM use the FM station's dial position for the moniker "96.3 News Radio KKOB."

WRKW is a commercially licensed radio station, licensed to Ebensburg, Pennsylvania. The station is owned by Forever Media and maintains studios and offices at 109 Plaza Drive in Johnstown. WRKW operates at the federally assigned frequency of 99.1 Megahertz with an effective radiated power of 50,000 watts, and transmits from a facility at 480 Tower Road in Summerhill, Pennsylvania.

Smooth 91.5 is a commercial radio station based in Melbourne, Victoria, Australia.

KKFM is a radio station out of Colorado Springs and Pueblo, Colorado. It plays a classic rock format on 98.1 FM and is under ownership of Cumulus Media.

WQFX-FM is a radio station licensed to Russell, Pennsylvania, the station serves the Jamestown, NY and Warren, PA areas. The station plays a classic rock format as well as newer cuts from the 2000s. The Rock 103 airstaff includes Brian Papalia in the Morning, Kyle Lewis midday, Lee John as well as other syndicated programming such as Nights with Alice Cooper, Live in Concert, Alice Cooper Saturday, House of Hair and Floydian Slip. The station also plays local musical talent on the Homegrown show each Sunday Night. The station serves as the area's affiliate for the Cleveland Browns Radio Network.

Stephens Media Group is an Oklahoma based radio broadcaster that owns 75 radio stations particularly in small to mid-size markets. Its flagship stations are at its headquarters in Tulsa. Stephens refers to itself as "A portfolio of People", referencing the listeners of their stations.