The Last Temptation is the thirteenth solo studio album by rock singer Alice Cooper, released in July 1994 via Epic Records. It centers on a boy named Steven (also the name of the protagonist in Cooper's earlier work, Welcome to My Nightmare ), and a mysterious showman. The showman, with apparent supernatural abilities, attempted with the use of twisted versions of morality plays to persuade Steven to join his traveling show, "The Theater of the Real - The Grand-est Guignol!", where he would "never grow up".

The album once again features collaborations with some high-profile guests: Chris Cornell of Soundgarden co-wrote and sings on two songs, Dan Wexler of Phoenix metallers Icon co-wrote four songs including the single "Lost in America" where he also plays guitar, and Derek Sherinian of Dream Theater plays keyboards.

The full story was given in a three-part comic book written by Neil Gaiman, [5] [6] the first part of which accompanied the recording. In the comic, the showman (referred to only ever as such) was depicted as Cooper himself. Pages from the comic are seen in the Lost in America music video, while it is being read by Steven.

It was originally published by Marvel Comics and later reprinted by Dark Horse Comics, collected as trade paperback. [7]

Music videos were made for "Lost in America" and "It's Me". Both music videos are available for download from Sony/BMG.

Barry Weber of allmusic.com wrote, "By the time The Last Temptation was released in 1994, the hair band fad that had fueled Cooper's return was dead, and Cooper was obviously aware of its downfall – the album sounds almost nothing like its two predecessors (1989's Trash and 1991's Hey Stoopid). Far surpassing anything Cooper recorded in almost 20 years, The Last Temptation is unquestionably some of his best work."

Although Epic did not finance a tour and Cooper consequently did not tour The Last Temptation, four of the album's songs – “It’s Me”, “Lost in America”, “Cleansed by Fire” and “Sideshow” – were incorporated into Cooper's setlist from the time of his first appearance on the Monsters of Rock circuit in September 1995. [8] Although “It’s Me” was dropped after four performances, [9] the other three songs remained a regular part of setlists until the end of the Life and Crimes of Alice Cooper tour in 1999, and were joined by “Nothing’s Free” on the “School’s Out for Summer ‘97” tour. However, with the exception of “Lost in America”, which has remained a frequent part of setlists excluding the first three quarters of the 2012 to 2015 “Raise the Dead” tour, [10] nothing from The Last Temptation has been performed live from 2000 onwards.

Derek Sherinian is an American keyboardist who has toured and recorded for Alice Cooper, Billy Idol, KISS, and Joe Bonamassa. He was also a member of Dream Theater from 1994 to 1999, is the founder of Planet X and also one of the founding members of Black Country Communion and Sons of Apollo. He has released eight solo albums that have featured a variety of prominent guest musicians, including guitarists Slash, Yngwie Malmsteen, Allan Holdsworth, Steve Lukather, Joe Bonamassa, Billy Sheehan, Zakk Wylde and Al Di Meola.

Marvel Music was a short-lived imprint of Marvel Comics, introduced in 1994 to publish comics developed in collaboration with musicians. 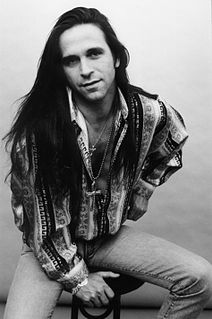 John Purdell was an American musician and multi-platinum rock music record producer who is credited on such albums as Ozzy Osbourne's No More Tears (1991) and Dream Theater's Awake (1994). He was born in San Diego and raised in Los Angeles. His father John Purdell (senior) (British) and mother Arrie Purdell (American) were both captains in the Salvation Army. He graduated from Verdugo Hills High School in Tujunga, California in 1977. 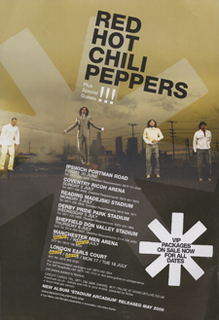 The Stadium Arcadium World Tour was a 2006–2007 concert tour by the band Red Hot Chili Peppers in support of their ninth studio album, Stadium Arcadium. The band started out with a pre-tour promotional leg of dates around the world while the world tour was composed of six legs, three in Europe, one in Australia, New Zealand and Asia, and the other two in the US and Canada.

Blackdiamondskye was a 2010 North American concert tour headlined by American rock band Alice in Chains featuring special guests Deftones and Mastodon. Blackdiamondskye is a portmanteau of the three band's then-most recent albums: Alice in Chains' Black Gives Way to Blue (2009), Deftones' Diamond Eyes (2010), and Mastodon's Crack the Skye (2009). The tour began on September 16, 2010 in Chicago and concluded on October 16, 2010 in Las Vegas.