"North Country Blues" is a song by Bob Dylan, released on his third studio album The Times They Are a-Changin' in 1964. He also performed it at the 1963 Newport Folk Festival.

Its apparently simple format (ten verses of ABCB rhyme scheme), accompanied by only two chords (Cm & Bb) and subject matter (the perils of life in a mining community and its ultimate demise) appears to have been influenced by Woody Guthrie. [1]

The specific location of the town is never stated. Daniel Epstein [2] recalled hearing Dylan introduce the song, in a performance in Washington D.C. in 1963, with the note that it was about the mining towns of Virginia. However, the title and references to "iron ore", "red iron", and "red iron pits" strongly suggests the location is on the Mesabi Range, a portion of the Iron Range where open-pit mining has predominated, [3] and where Dylan's childhood residence in Hibbing, Minnesota is situated. Virginia, Minnesota is a town near Hibbing, that, along with Hibbing, has shared boom and bust cycles due to changes in the mining industry, and may be the town that Dylan was talking about in the Washington concert.

The song opens with a deliberately conventional opening (Come gather round friends and I'll tell you a tale...). However, the darkness of the tale soon becomes apparent. Each verse contains at least one tragic situation or event:

Dylan hides the fact that the narrator is a woman to the end of verse four. The song ends bleakly, as by this time the woman has lost her husband, mother, father and brother; the mine is closed and the town is virtually abandoned; and soon her children will leave her in complete isolation and desolation.

Within this apparently restricting and morose format, referred to as a "formally conservative exercise in first-person narrative", Dylan manages to achieve significant tonal and expressive variation. [5]

In 1968, Joan Baez included a cover of "North Country Blues" on her Dylan tribute album Any Day Now. [6]

Hibbing is a city in Saint Louis County, Minnesota, United States. The population was 16,361 at the 2010 census. The city was built on the rich iron ore of the Mesabi Iron Range. At the edge of town is the largest open-pit iron mine in the world, the Hull–Rust–Mahoning Open Pit Iron Mine. U.S. Highway 169, State Highway 37, State Highway 73, Howard Street, and 1st Avenue are five of the main routes in Hibbing. The Range Regional Airport offers daily commercial flights between Hibbing and Minneapolis-St. Paul, as well as hosting many private pilots and the Minnesota Department of Natural Resources fire fighting aircraft.

The Mesabi Iron Range is a mining district in northeastern Minnesota following an elongate trend containing large deposits of iron ore. It is the largest of four major iron ranges in the region collectively known as the Iron Range of Minnesota. First described in 1866, it is the chief iron ore mining district in the United States. The district is located largely in Itasca and Saint Louis counties. It has been extensively worked since 1892, and has seen a transition from high-grade direct shipping ores through gravity concentrates to the current industry exclusively producing iron ore (taconite) pellets. Production has been dominantly controlled by vertically integrated steelmakers since 1901, and therefore is dictated largely by US ironmaking capacity and demand. 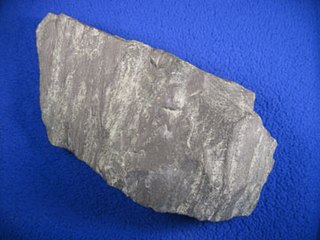 Taconite is a variety of iron formation, an iron-bearing sedimentary rock, in which the iron minerals are interlayered with quartz, chert, or carbonate. The name "taconyte" was coined by Horace Vaughn Winchell (1865–1923) – son of Newton Horace Winchell, the Minnesota State Geologist – during their pioneering investigations of the Precambrian Biwabik Iron Formation of northeastern Minnesota. He believed the sedimentary rock sequence hosting the iron-formation was correlative with the Taconic orogeny of New England, and referred to the unfamiliar and as-yet-unnamed iron-bearing rock as the 'taconic rock' or taconyte.

The term Iron Range refers collectively or individually to a number of elongated iron-ore mining districts around Lake Superior in the United States and Canada. Despite the word "range", the iron ranges are not mountain chains, but outcrops of Precambrian sedimentary formations containing high percentages of iron. These cherty iron ore deposits are Precambrian in age for the Vermilion Range and middle Precambrian in age for the Mesabi and Cuyuna ranges, all in Minnesota. The Gogebic Range in Wisconsin and the Marquette Iron Range and Menominee Range in Michigan have similar characteristics and are of similar age. Natural ores and concentrates were produced from 1848 until the mid 1950s, when taconites and jaspers were concentrated and pelletized, and started to become the major source of iron production.

The Arrowhead Region is located in the northeastern part of the U.S. state of Minnesota, so called because of its pointed shape. The predominantly rural region encompasses 10,635.26 square miles (27,545.2 km2) of land area and includes Carlton, Cook, Lake and Saint Louis counties. Its population at the 2000 census was 248,425 residents. The region is loosely defined, and Aitkin, Itasca, and Koochiching counties are sometimes considered as part of the region, increasing the land area to 18,221.97 square miles (47,194.7 km2) and the population to 322,073 residents. Primary industries in the region include tourism and iron mining.

The Cuyuna Range is an iron range to the southwest of the Mesabi Range, largely within Crow Wing County, Minnesota. It lies along a 68-mile-long (109 km) line between Brainerd, Minnesota, and Aitkin, Minnesota. The width ranges from 1 to 10 miles.

"Lily, Rosemary and the Jack of Hearts", is an epic narrative ballad by the American singer-songwriter Bob Dylan released as the seventh song on his 1975 album Blood on the Tracks. It is known for its complex plot and nearly nine-minute running time. It is one of five songs on Blood on the Tracks that Dylan initially recorded in New York City in September 1974 and then re-recorded in Minneapolis in December that year; the latter version became the album track.

"Talkin' World War III Blues" is a song written and performed by the American singer-songwriter Bob Dylan that was first released as the tenth track of his 1963 album The Freewheelin' Bob Dylan. Like nearly every song on the album, it is performed by Dylan solo, accompanying himself on acoustic guitar and harmonica played in a rack. 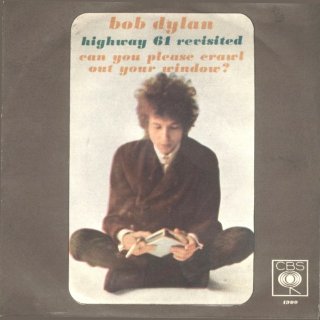 "Highway 61 Revisited" is the title track of Bob Dylan's 1965 album Highway 61 Revisited. It was also released as the B-side to the single "Can You Please Crawl Out Your Window?" later the same year. In 2004, Rolling Stone magazine ranked the song as number 373 in their 500 Greatest Songs of All Time.

The Hull–Rust–Mahoning Open Pit Iron Mine in Hibbing, Minnesota, United States, is the largest operating open-pit iron mine in Minnesota. The pit stretches more than three miles (5 km) long, two miles (3 km) wide, and 535 feet (163 m) deep. It was established in 1895 and was one of the world's first mechanized open-pit mines.

The Seven Iron Men, also known as Merritt Brothers, were iron-ore pioneers in the Mesabi Range in northeastern Minnesota and the creation of the city that is now known as Mountain Iron. In the late 1800s, the Merritt family founded the largest iron mine in the world and initiated the consolidation of the American railway system into what would ultimately become the United States Steel Corporation. Their story was told, in part, by the book Seven Iron Men by Paul de Kruif. The book was first published in 1929.

"Restless Farewell" is a song by Bob Dylan, released as the final track on his third studio album The Times They Are a-Changin' in 1964. The melody is based on the Scottish folk song "The Parting Glass". 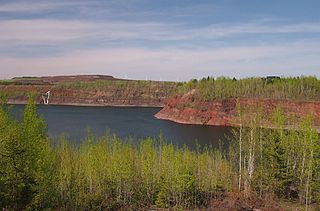 Mountain Iron Mine is a former mine in Mountain Iron, Minnesota, United States. Opened in 1892, it was the first mine on the Mesabi Range, which has proved to be the largest iron ore deposit ever discovered. Mining operations at the site ceased in 1956. The bottom of the open-pit mine has filled with water but its dimensions are readily visible. The city maintains an overlook in Mountain Iron Locomotive Park.

"Which Side Are You On?" is a song written in 1931 by activist Florence Reece, wife of Sam Reece, a union organizer for the United Mine Workers in Harlan County, Kentucky. 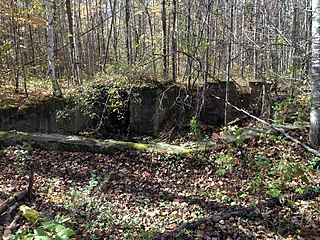 Manganese is a ghost town and former mining community in the U.S. state of Minnesota that was inhabited between 1912 and 1960. It was built in Crow Wing County on the Cuyuna Iron Range in sections 23 and 28 of Wolford Township, about 2 miles (3.2 km) north of Trommald, Minnesota. After its formal dissolution, Manganese was absorbed by Wolford Township; the former town site is located between Coles Lake and Flynn Lake. First appearing in the U.S. Census of 1920 with an already dwindling population of 183, the village was abandoned by 1960.

The Marquette Iron Range is a deposit of iron ore located in Marquette County, Michigan in the United States. The towns of Ishpeming and Negaunee developed as a result of mining this deposit. A smaller counterpart of Minnesota's Mesabi Range, this is one of two iron ranges in the Lake Superior basin that are in active production as of 2018. The iron ore of the Marquette Range has been mined continuously from 1847 until the present day. Marquette Iron Range is the deposit's popular and commercial name; it is also known to geologists as the Negaunee Iron Formation.

The Oliver Iron Mining Company was a mining company operating in Minnesota, United States. It was one of the most prominent companies in the early decades of mining on the Mesabi Range. As a division of U.S. Steel, Oliver dwarfed its competitors—in 1920, it operated 128 mines across the region, while its largest competitor operated only 65.

Elcor is a ghost town, or more properly, an extinct town, in the U.S. state of Minnesota that was inhabited between 1897 and 1956. It was built on the Mesabi Iron Range near the city of Gilbert in St. Louis County. Elcor was its own unincorporated community before it was abandoned and was never a neighborhood proper of the city of Gilbert. Not rating a figure in the national census, the people of Elcor were only generally considered to be citizens of Gilbert. The area where Elcor was located was annexed by Gilbert when its existing city boundaries were expanded after 1969.