I Dreamed I Saw St. Augustine

"I Dreamed I Saw St. Augustine" is a song by Bob Dylan that was originally released on his 1967 album John Wesley Harding . It was recorded at the first John Wesley Harding session on October 17, 1967. [1] It has been covered by many artists, including Joan Baez on her all-Dylan album Any Day Now , as well as by Vic Chesnutt, Eric Clapton, John Doe, Thea Gilmore, Adam Selzer and Dirty Projectors. [2] In addition, Jimi Hendrix at one point intended to cover this song, but felt it was too personal to Dylan and instead covered a different song from the album, "All Along the Watchtower". [3]

"I Dreamed I Saw St. Augustine" is a pensive ballad. [4] Like the rest of the John Wesley Harding album, the music of "I Dreamed I Saw St. Augustine" uses spare, unobtrusive musical accompaniment. [4] The primary instruments are an acoustic guitar and drums. [4] The lyrics describe a dream that is enigmatic and subject to interpretation. [4] However, the lyrics do convey a deeply felt sense of guilt, as well as a vision of faith, righteousness, fear and betrayal. [4] [5] The sense of guilt is particularly prevalent in the final verse: [4]

I dreamed I saw St. Augustine Alive, with fiery breath And I dreamed I was amongst the ones that put him out to death Oh, I awoke in anger, so alone and terrified I put my fingers against the glass And bowed my head and cried

The opening couplet of the song paraphrases the song "Joe Hill", which begins with the lines "I Dreamed I Saw Joe Hill Last Night", by Alfred Hayes and Earl Robinson. [1] [6] "Joe Hill" was a folk song written as a tribute to the union organizer Joe Hill, who was viewed by supporters as a martyr after he was convicted of a motiveless murder based on weak evidence. [1] [6] The reference is ironic, since the song seems to deny the existence of modern martyrs to lead humanity towards salvation. [6]

The St. Augustine in the title has often been linked to St. Augustine of Hippo, although St. Augustine of Hippo was not martyred, but died shortly before the Vandal sack of Hippo. [6] [7] He was, however, a philosopher who wrote about evil and guilt, he defined the concept of original sin and therefore mankind's ultimate guilt, and could have viewed himself as being martyred in the sense of being killed by his own sins. [6] [8] In the dream revealed in the song, St. Augustine wears a coat of solid gold, which may signify either the worldly excesses of mankind and the Catholic Church or St. Augustine's own spiritual wealth. [6] [7] He also carries a blanket, which may be a sign of asceticism or of his compassion. [6] [7] St. Augustine searches for "the very souls / Whom already have been sold," a reference to the commercialization of mankind's inner self, a motif that will recur on later songs on the album such as "Dear Landlord" and "The Ballad of Frankie Lee and Judas Priest". [6] He tells "ye gifted kings and queens" that "No martyr is among ye now," but consoles them with the knowledge that nonetheless they are not alone. [7] But the dream ends with the narrator realizing that he himself is among those that put St. Augustine to death, initiating his feelings of guilt as he now sees the error of his ways. [1] One interpretation of the song is that St. Augustine is a stand-in for Dylan himself, who had been viewed as a prophet or messiah, was nearly "martyred" in a motorcycle accident a few months before the song was written, but in any case had come too late since mankind (including himself) had already sold its soul to many temptations. [1] [6] Another possible interpretation is that Dylan sees himself as being among those who "put Him out to death," a reference to responsibility for the death of Jesus, the ultimate expression of personal guilt. 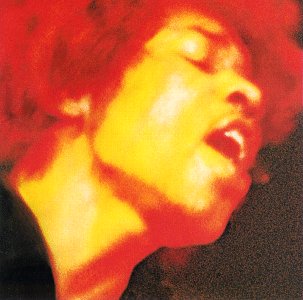 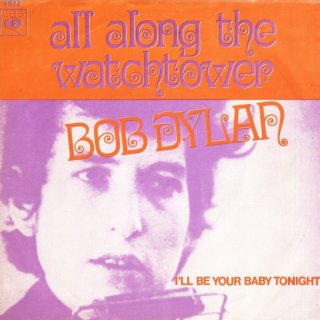 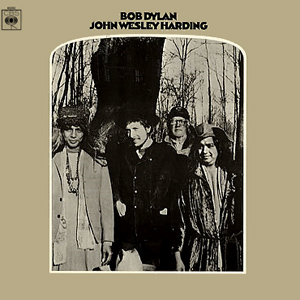 John Wesley Harding is the eighth studio album by American singer-songwriter Bob Dylan, released on December 27, 1967, by Columbia Records. Produced by Bob Johnston, the album marked Dylan's return to semi-acoustic instrumentation and folk-influenced songwriting after three albums of lyrically abstract, blues-indebted rock music. John Wesley Harding shares many stylistic threads with, and was recorded around the same time as, the prolific series of home recording sessions with The Band, partly released in 1975 as The Basement Tapes, and released in complete form in 2014 as The Bootleg Series Vol. 11: The Basement Tapes Complete.

"Little Wing" is a song written by Jimi Hendrix and recorded by the Jimi Hendrix Experience in 1967. It is a slower tempo, rhythm and blues-inspired ballad featuring Hendrix's vocal and guitar with recording studio effects accompanied by bass, drums, and glockenspiel. Lyrically, it is one of several of his songs that reference an idealized feminine or guardian angel-like figure. At about two and a half minutes in length, it is one of his most concise and melodically-focused pieces.

"Ballad of a Thin Man" is a song written and recorded by Bob Dylan, and released in 1965 on his sixth album, Highway 61 Revisited. 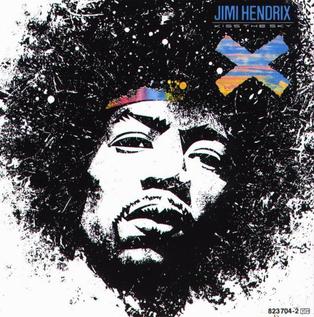 Kiss the Sky is a compilation album by American rock guitarist, singer–songwriter Jimi Hendrix. In the US, it was released by Reprise Records in October 1984 and by Polydor Records in the UK in November 1984. The album's title is taken from the lyrics of "Purple Haze."

The Singles Album is an album compiling all of the singles released by the Jimi Hendrix Experience and Jimi Hendrix up to the 1979 release of "Gloria" ). It issued only in Europe in 1983 as a two LP record set and also on cassette. In 1985, it was released as a two-CD set. Digital engineering was done by Carlos Olms in London. 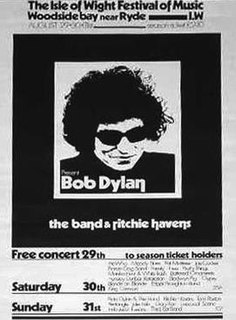 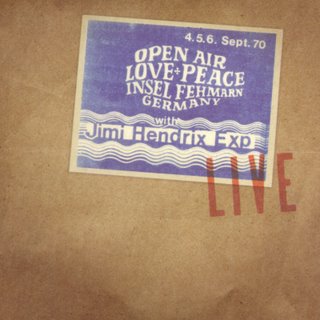 Live at the Isle of Fehmarn is a posthumous live album by Jimi Hendrix, released on December 13, 2005 by Dagger Records. The album documents the band's performance at the Open Air Love & Peace Festival in Fehmarn, Germany on September 6, 1970, which was Jimi Hendrix's final concert performance.

"The Wicked Messenger" is a song written and originally performed by Bob Dylan for his album John Wesley Harding. The song was recorded at Columbia's Studio A, Nashville, on November 29, 1967.

Re-Experienced is a posthumous compilation album by Jimi Hendrix, released in the Netherlands in 1975 by Polydor Records. The album contains songs from Are You Experienced, Axis: Bold as Love, Electric Ladyland and The Cry of Love, as well as one track from War Heroes, one from Band of Gypsys and one live track from Hendrix in the West.

Mark "Moogy" Klingman was an American musician and songwriter. He was a founding member of Todd Rundgren's band, Todd Rundgren's Utopia, and later became a solo recording artist, bandleader and songwriter. He released two solo recordings, and his songs have been covered by artists as wide ranging as Johnny Winter, Carly Simon, James Cotton, Thelma Houston, Eric Clapton, Barry Manilow and Guns N' Roses. He played on stage with Jimi Hendrix, Chuck Berry, Luther Vandross, Lou Reed, Jeff Beck and Allan Woody & Warren Haynes of the Allman Brothers and Gov't Mule. Other than Rundgren, his longest musical association may have been with Bette Midler, whom he served as band leader and who adopted for her signature song "(You Gotta Have) Friends", composed by Klingman and William "Buzzy" Linhart. 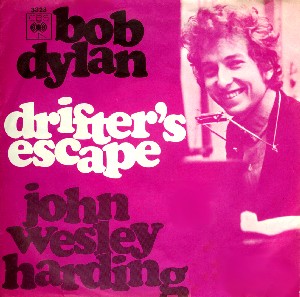 "Drifter's Escape" is a song written by Bob Dylan that he recorded for his 1967 album John Wesley Harding. Columbia Records released it as a single in the US and the UK in 1969 as the B-side to "I Threw It All Away". The song was recorded in four takes on October 17, 1967. CBS Records International also issued the song paired with "John Wesley Harding" in some markets.

"John Wesley Harding" is a song by Bob Dylan that appears on his 1967 album of the same name. 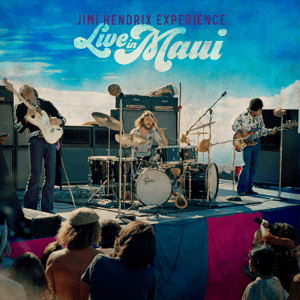 Live in Maui is an album by the Jimi Hendrix Experience documenting their performance outdoors on Maui, Hawaii, on July 30, 1970. It marks the first official release of Hendrix's two full sets recorded during the filming of Rainbow Bridge (1971). The two-CD and three-LP set was released on November 20, 2020, along with a video documentary titled Music, Money, Madness ... Jimi Hendrix in Maui.