Radio Veritas Asia is the non-commercial Catholic shortwave station broadcasting to Asia. It is based in Quezon City, Philippines, and is owned by the Philippine Radio Educational and Information Center, which previously owned the original Radio Veritas from 1969 to 1991. Its Urdu Service started its broadcast on August 14, 1987 in Lahore, Pakistan. [1] Its mission is to promote justice to the oppressed through programs with specific moral, religious and inspirational content, and to voice peace and harmony among the sects, races, and sexes through socio-cultural programs and to promote dialogue among different religions.

In December 1958, the delegates of the Southeast Asian Bishops' Conference unanimously resolved to establish a radio station to serve the countries of Southeast Asia. Eleven years after that, Radio Veritas was inaugurated, on April 11, 1969.

The Federation of Asian Bishops' Conference (FABC) was entrusted with the operations of RVA from its beginning in 1970. This was confirmed by FABC's governing body, the General Assembly, in 1974.

Radio Veritas embarked on different means of delivering its religious message. It started using new technology such as the Internet and webcasting, and plans to upgrade to digital broadcasting.

On October 9, 2011, more than 80 people from all over the country attended the 11th listeners’ conference of Radio Veritas Asia's Urdu language service in Lahore. RVA's Urdu service airs 13 morning and evening programs reaching listeners in Pakistan and India. In 2011 Father Nadeem John Shakir was the studio director. [5]

The 15th Conference of Catholic radio listeners was held on 21 September 2015 at Loyola Hall in Lahore. It was attended by 120 people from around the country. Bishop Joseph Arshad of Faisalabad and head of the Commission for Social Communications, addressed the conference invited the participants to build peace, tolerance and brotherhood in society via the radio. [6]

The service is largely funded by the German donors Missio. In 2010 they announced a cut back of 10 per cent of their annual funding. The Center used to receive annual funding of 10,000 rupees from the Catholic Bishops' Conference of Pakistan for their Urdu service but this stopped six years ago. [7]

It has a mix of moral, religious, evangelical and socio-cultural, and entertainment programs on offer, as well as a few political, economic and informational programs. Programs include:

In 2015, it offers two 27 minute programs, one in the morning and one at night, dealing with health, culture, values, famous places in the world, personalities, social issues, literature, inventions and world news.

RVA and the Pope

During the 25th anniversary celebration of RVA in 1995 Pope John Paul II said that RVA must be helped to fulfill its mission even though this will certainly involve even greater sacrifices and renewed commitment on the part of the local churches in Asia.

Pope Francis sent a message to the station, which celebrated its 50th anniversary on April 11, 2019, calling for it to help build “a more just and united society". [8]

The broadcast tapes of the 1986 People Power Revolution are housed in the RVA archives. UNESCO has catalogued the audio files as part of the selected collection included in the Memory of the World Program and Digital Preservation of Documentary Heritage.

On 25 July 2020, the Chairman of the National Commission for Social Communications, Archbishop Joseph Arshad of Islamabad-Rawalpindi launched the Radio Veritas Asia Urdu news service. This is the first Catholic news program of its kind in the country. [9]

Evarist Pinto is the former archbishop of Karachi, Pakistan.

Lawrence John Saldanha is a retired archbishop from Pakistan. He was born in Mangalore, India. He received his religious training at the Christ the King seminary in Karachi and was ordained a priest in Lahore, Pakistan on 16 January 1960.

The Roman Catholic Archdiocese of Lahore is a Latin Metropolitan Archdiocese in Punjab province, Pakistan.

Andrew Francis was the Pakistani Roman Catholic bishop of Diocese of Multan from 2000 to 2014.

The Catholic Diocese of Islamabad-Rawalpindi is a diocese of the Latin Rite of the Roman Catholic Church in Pakistan.

Sebastian Francis Shaw is a Pakistani Roman Catholic archbishop. He was born in Padri Jo Goth, Sindh, Pakistan on 14 November 1957. He received his early education at Fatima High School and attended the Government Degree College. He received his religious training under the Order of Friars Minor and at the Christ the King seminary in Karachi and was ordained a priest in Lahore, Pakistan on 6 December 1991. Before joining the Franciscans he was a teacher.

Sacred Heart Cathedral is the seat of the Roman Catholic Archdiocese of Lahore, located in Lahore, Punjab, Pakistan. Built at the behest of bishop Godefroid Pelckmans with Belgian aid and materials, the cathedral was consecrated by Bishop Fabian Eestermans, the Bishop of Lahore, on 19 November 1907. Its roots lie in the historical presence of the Belgian Capuchins in Pakistan. The design of this Cathedral was made according to the Roman Byzantine-style by Belgian architect, Edouard Dobbeleers of Antwerp.

Caritas Pakistan opened in 1965 and has many years of humanitarian assistance history in Pakistan. It is affiliated with Caritas Internationalis, a Roman Catholic humanitarian organisation and one of the largest networks dedicated to reducing poverty and injustice in the world. 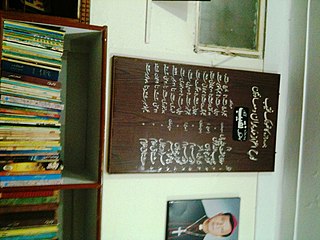 The Catholic Naqib ( Urdu نقیب )'' is the oldest Urdu-language Catholic magazine, founded in Lahore, Pakistan in 1929 by Roman Catholic Archdiocese of Lahore and published by Lahore Press and since 1997 by Naqib Printing Press. Naqib (نقیب) is Arabic originated name, that means herald or Proclaimer. The Naqib is one of the oldest magazines in the history of Pakistani journalism! It was founded as a spokesperson of Bishops of Pakistan as well as well as for the laity, according to its motto mentioned on the first page of its first edition in 1929.

The Catholic Board of Education is the arm of the Roman Catholic Church in Pakistan responsible for education. Each diocese has its own board. Collectively the Catholic Church runs 534 schools, 8 colleges, and 7 technical institutes in its 2 archdioceses, 4 dioceses, and one Apostolic Prefecture.

The National Marian Shrine in Mariamabad, Sheikhupura District, Pakistan is a National Shrine and the site of an annual pilgrimage for the September 8 feast of the birth of Mary. This event has been taking place since 1949. Mariamabad means city of Mary in the Urdu language.

The Daughters of Saint Paul is a Roman Catholic religious order for women, and has had a presence in Pakistan since 1966.

Catholic (National) Commission for Justice and Peace (NCJP) was formed in 1985 by the Catholic Bishops' Conference of Pakistan. It provides services in the field of human rights advocacy.

The Franciscan Portiuncula Friary is the oldest friary in Pakistan, founded in 1940. It is located in Gulshan-e-Iqbal, Karachi, adjacent to the Christ the King Seminary. It is the Pakistani base of the Order of Friars Minor, a mendicant Catholic religious order founded by Saint Francis of Assisi in 1209.

The Pakistan Catholic Bishops' Conference (PCBC) is the episcopal conference of the Catholic bishops of Pakistan. Its objectives are to facilitate coordinated study and discussion of issues affecting the Church, and adoption of a common policy and effective action in all matters concerning the Church in Pakistan.

Joseph Arshad is the Roman Catholic Bishop of Islamabad-Rawalpindi in Pakistan.