SBC was first founded in 1969 as a daily radio companion of the people of Olongapo, Philippines in providing news and entertainment. When it was incorporated on July 29, 1969 it began broadcasting on the AM frequency 1557 kHz as DWGO "Radio on the Go". After being temporarily closed during martial law in 1972, it resumed operation in 1976 on a new frequency - DWGO 1008 kHz. SBC soon acquired a franchise for radio and television operation, which began to broadcast regularly in January 2011 as DWSB TV 22 - the first & only television station in Olongapo City.

In the early half of the year 2013, SBC partnered with TV5 to better serve the viewing public of Olongapo, Zambales, Bataan, and neighboring areas.

The FM broadcast band is a range of radio frequencies used for FM broadcasting by radio stations. The range of frequencies used differs between different parts of the world. In Europe and Africa and in Australia, it spans from 87.5 to 108 megahertz (MHz) - also known as VHF Band II - while in the Americas it ranges from 88 to 108 MHz. The FM broadcast band in Japan and Brazil uses 76 to 95 MHz. The International Radio and Television Organisation (OIRT) band in Eastern Europe is from 65.9 to 74.0 MHz, although these countries now primarily use the 87.5 to 108 MHz band, as in the case of Russia. Some other countries have already discontinued the OIRT band and have changed to the 87.5 to 108 MHz band.

WBAP is an AM news/talk radio station licensed to Fort Worth, Texas, and serving the Dallas-Fort Worth Metroplex. WBAP is owned by Cumulus Media and broadcasts with 50,000 watts from a transmitter site in the northwest corner of Mansfield. It is a Class A clear-channel station, using a non-directional antenna. Its nighttime signal can often be heard throughout the Southern, Central, and Midwestern states and Northern Mexico, while its daytime signal provides at least secondary coverage from Oklahoma City to Austin. The station's studios are located in the Victory Park district in Dallas just north of downtown. WBAP is one of the oldest radio stations in Texas, dating back to 1922, when stations in Texas were still given call signs beginning with "W" instead of "K."

CBN is a public AM radio station in St. John's, Newfoundland and Labrador, Canada. It carries a news, talk and information format and is the local Radio One station of the Canadian Broadcasting Corporation. 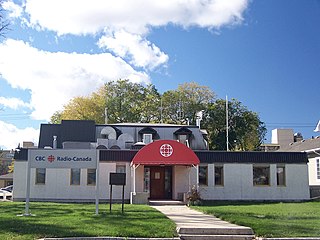 CKSB-10-FM is a Canadian public radio station serving the Winnipeg Capital Region in Manitoba. It is owned by the Société Radio-Canada (CBC) and airs the Ici Radio-Canada Première network, concentrating on news and talk in the French language. It had been licensed to Saint Boniface, which was a separate city until it was annexed by Winnipeg in 1971. Even though the call sign includes a number, usually indicating the station is a rebroadcaster, CKSB-10-FM originates some of its own local programming and contributes to the Ici Radio-Canada Première network.

Palawan Broadcasting Corporation (PBC), also known by its call sign DYPR, was the first local radio station to serve the island of Palawan, the Philippines. It was established in 1965, in the capital Puerto Princesa City, by Ramon Oliveros Decolongon.

DZRB, on-air as Radyo Pilipinas (RP1), is a radio station owned and operated by the Philippine Broadcasting Service, an agency under the Presidential Communications Operations Office. It serves as the flagship station of the Radyo Pilipinas network. The station's studios are located at the 4/F, PIA/Media Center Building, Visayas Ave., Brgy. Vasra, Diliman, Quezon City, and its transmitter is located at Brgy. Marulas, Valenzuela City. It operates from 4am to 10pm on weekdays and 4am to 8pm on weekends.

DZRV, on-air as Veritas 846, and commonly called as "Radyo Veritas"(Radio Veritas, sharing its name with its former sister station) is a commercial Roman Catholic radio station owned and operated by the Archdiocese of Manila under the Global Broadcasting System. It is a member of the Catholic Media Network, serving as its de facto flagship station. The studio is located at Veritas Tower, #162 West Ave. cor. EDSA, Barangay Philam, Quezon City, and its 50-kilowatt transmitter is located at Brgy. Taliptip, Bulacan, Bulacan, sharing the site of DZXL Radyo Trabaho of Radio Mindanao Network. It operates round-the-clock daily, except for Sundays, by signing-off the air from midnight to 3:30 AM.

DZSR, on-air as Radyo Pilipinas Dos (RP2), is a radio station owned and operated by the Philippine Broadcasting Service, an agency under the Presidential Communications Operations Office based in the Philippines. The station's studio is located at 4th floor, Media Center Building, Visayas Avenue, Barangay Vasra, Diliman, Quezon City, and its transmitter is located in Malolos. DZSR operates daily from 6:00 AM to 9:00 PM.

DWAB-TV, channel 22, is a television headquarters ownership of Subic Broadcasting Corporation. Its studio and transmitter are located at Admiral Royale Building, 17 Street cor. Anonas Street, Brgy. West Bajac-Bajac, Olongapo City. It is approved by the government under Republic Act No. 7511 of the Philippine Constitution to serve Olongapo City and Subic Bay Freeport Zone.

WOOK was a radio station that operated on 1340 kHz in Washington, D.C. Owned by Richard Eaton's United Broadcasting, the station was known for its programming for the African American community in the Washington metropolitan area; prior to that, in the 1940s, it was an independent station owned for several years by the Washington Post. WOOK, which spawned an FM station (WFAN) and a TV station, had its license revoked by the Federal Communications Commission in 1975 for an illegal numbers racket. In 1976, with the station's fate nearly sealed, WOOK became Spanish-language WFAN, in a format swap that allowed the Black-formatted WOOK intellectual unit to stay alive. WFAN ceased operating on April 22, 1978; on August 15, WYCB began broadcasting on its frequency.