In economics and finance, the profit rate is the relative profitability of an investment project, a capitalist enterprise or a whole capitalist economy. It is similar to the concept of rate of return on investment.

The rate of profit depends on the definition of capital invested. Two measurements of the value of capital exist: capital at historical cost and capital at market value. Historical cost is the original cost of an asset at the time of purchase or payment. Market value is the re-sale value, replacement value, or value in present or alternative use.

On the other side, due to technical progress, products tend to become cheaper. This in itself should, theoretically, raise rates of profit, because replacement cost declines.

If, however, firms achieve higher sales per worker the more they invest per worker, they will try to increase investments per worker as long as this raises their rate of profit. If some capitalists do this, all capitalists must do it, because those who do not will fall behind in competition.

This "new" rate of profit (r'), which tends to fall, would be measured as

r' = (surplus-value)/(capital to be invested for the next period of production in order to remain competitive).

At the beginning of a "year" (possibly another length of time period, in this case other numerical values will arise) the capitalist has to invest an amount of capital.

For example, he must invest:

Furthermore he must invest for constant capital c:

In total he invests at the beginning of the year 500 €.

Now, it is assumed that during the year the capitalist can produce and sell commodities at a total price of 300 €. Volume of sales, therefore, is 300 €.

Fixed capital are those means of production, which are in use for more than one year: The capitalist must take into account, that “instruments” and “machines” do not live forever, but must finally be replaced after usage. From sales he must take aside certain sums of money (depreciation) to be able to replace “instruments” and “machines” at their end of life. For “instruments”, the depreciation expense per year is 50 € (100 € purchase cost divided by lifespan of 2 years, straight-line depreciation assumed) and for “machines” 25 € (100 € purchase cost divided by 4 years). For “equipment” there is no depreciation expense, because, in this example, it is assumed that equipment holds forever, there is no wear and tear for equipment.

In Marxian political economy, the rate of profit (r) would be measured as

where surplus value corresponds to unpaid labor in the production process or to profits, interest, and rent (property income).

A cash flow is a real or virtual movement of money:

In accounting, fixed capital is any kind of real, physical asset that is used repeatedly in the production of a product. In economics, fixed capital is a type of capital good that as a real, physical asset is used as a means of production which is durable or isn't fully consumed in a single time period. It contrasts with circulating capital such as raw materials, operating expenses etc.

Expenditure is an outflow of money, or any form of fortune in general, to another person or group as payment for an item, service, or other category of costs. For a tenant, rent is an expense. For students or parents, tuition is an expense. Buying food, clothing, furniture or an automobile is often referred to as an expense. An expense is a cost that is "paid" or "remitted", usually in exchange for something of value. Something that seems to cost a great deal is "expensive". Something that seems to cost little is "inexpensive". "Expenses of the table" are expenses of dining, refreshments, a feast, etc. 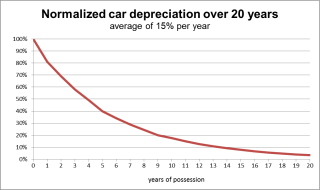 In accountancy, depreciation refers to two aspects of the same concept: first, the actual decrease of fair value of an asset, such as the decrease in value of factory equipment each year as it is used and wear, and second, the allocation in accounting statements of the original cost of the assets to periods in which the assets are used.

Fixed investment in economics is the purchasing of newly produced fixed capital. It is measured as a flow variable – that is, as an amount per unit of time.

Capital accumulation is the dynamic that motivates the pursuit of profit, involving the investment of money or any financial asset with the goal of increasing the initial monetary value of said asset as a financial return whether in the form of profit, rent, interest, royalties or capital gains. The aim of capital accumulation is to create new fixed and working capitals, broaden and modernize the existing ones, grow the material basis of social-cultural activities, as well as constituting the necessary resource for reserve and insurance. The process of capital accumulation forms the basis of capitalism, and is one of the defining characteristics of a capitalist economic system.

In Marxism, the valorisation or valorization of capital is the increase in the value of capital assets through the application of value-forming labour in production. The German original term is "Verwertung" but this is difficult to translate. The first translation of Capital by Samuel Moore and Edward Aveling, under Engels' editorship, renders "Verwertung" in different ways depending on the context, for example as "creation of surplus-value", "self-expanding value", "increase in value" and similar expressions. These renderings were also used in the US Untermann revised edition, and the Eden and Cedar Paul translation. It has also been wrongly rendered as "realisation of capital". 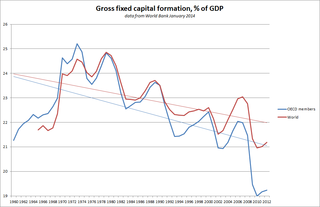 Prices of production is a concept in Karl Marx's critique of political economy, defined as "cost-price + average profit". A production price can be thought of as a type of supply price for products; it refers to the price levels at which newly produced goods and services would have to be sold by the producers, in order to reach a normal, average profit rate on the capital invested to produce the products.

Faux frais of production is a concept used by classical political economists and by Karl Marx in his critique of political economy. It refers to "incidental operating expenses" incurred in the productive investment of capital, which do not themselves add new value to output. In Marx's social accounting, the faux frais are a component of constant capital, or alternately are funded by a fraction of the new surplus value.

Operating surplus is an accounting concept used in national accounts statistics and in corporate and government accounts. It is the balancing item of the Generation of Income Account in the UNSNA. It may be used in macro-economics as a proxy for total pre-tax profit income, although entrepreneurial income may provide a better measure of business profits. According to the 2008 SNA, it is the measure of the surplus accruing from production before deducting property income, e.g., land rent and interest.

The tendency of the rate of profit to fall (TRPF) is a theory in the crisis theory of political economy, according to which the rate of profit—the ratio of the profit to the amount of invested capital—decreases over time. This hypothesis gained additional prominence from its discussion by Karl Marx in Chapter 13 of Capital, Volume III, but economists as diverse as Adam Smith, John Stuart Mill, David Ricardo and Stanley Jevons referred explicitly to the TRPF as an empirical phenomenon that demanded further theoretical explanation, although they differed on the reasons why the TRPF should necessarily occur.

Constant capital (c), is a concept created by Karl Marx and used in Marxian political economy. It refers to one of the forms of capital invested in production, which contrasts with variable capital (v). The distinction between constant and variable refers to an aspect of the economic role of factors of production in creating a new value.

In Marxian economics, surplus value is the difference between the amount raised through a sale of a product and the amount it cost to the owner of that product to manufacture it: i.e. the amount raised through sale of the product minus the cost of the materials, plant and labour power. The concept originated in Ricardian socialism, with the term "surplus value" itself being coined by William Thompson in 1824; however, it was not consistently distinguished from the related concepts of surplus labor and surplus product. The concept was subsequently developed and popularized by Karl Marx. Marx's formulation is the standard sense and the primary basis for further developments, though how much of Marx's concept is original and distinct from the Ricardian concept is disputed. Marx's term is the German word "Mehrwert", which simply means value added, and is cognate to English "more worth".

Marxian economics, or the Marxian school of economics, is a heterodox school of political economic thought. Its foundations can be traced back to Marx critique of political economy. Marxian economics comprises several different theories and includes multiple schools of thought, which are sometimes opposed to each other, and in many cases Marxian analysis is used to complement or supplement other economic approaches. Because one does not necessarily have to be politically Marxist to be economically Marxian, the two adjectives coexist in usage rather than being synonymous. They share a semantic field while also allowing connotative and denotative differences.