In 1158 or 1159 Nigel,Bishop of Ely paid Henry II to appoint his natural son,Richard FitzNeal,as the king's treasurer. [1] [2] Richard was the great nephew of Roger,bishop of Salisbury,who had organized the exchequer under Henry I,when it was separated from the Chamberlain's office in the king's household. Henry II,who was an astute judge of character and inspired great loyalty,was well served by Richard,who held the post of Lord Treasurer at the head of Henry's exchequer for almost the next 40 years. Concurrently Richard was Dean of Lincoln,a major administrative position in an important English diocese.[ citation needed ] In 1184 he was made Prebendary of Aylesbury. [3] [ unreliable source? ] He also held the prebend of Chiswick in the diocese of London. [2]

In 1177 Henry II asked FitzNeal to write a book about his work. The book, Dialogue Concerning the Exchequer (Dialogus de Scaccario),is the first administrative treatise of the Middle Ages,a unique source of information on royal finances and the methods of collecting them in the twelfth century. Its preface instructs the novice in governance that it is not the function of the exchequer officials to decide on the merit of royal policy,merely to execute it. The secular bureaucracy is the instrument of the king's will,and the royal power ebbs and flows according to whether his treasury is full or empty.[ citation needed ] He wrote at the end of the work that he had "laid my axe to the virgin and rough wood and cut for the royal buildings timber that a more skilled builder may smooth with his adze". [4] It is in the Dialogue that Richard recorded an oral story told to him by Henry of Blois,grandson of William the Conqueror and Bishop of Winchester,about the origins of Domesday Book,which according to Henry of Blois's story was made so that "every man might be content with his own rights,and not encroach unpunished on those of others". [5]

As well as being treasurer,FitzNeal was rewarded with the position of bishop of London from 1189 until his death in 1198. He was nominated on 15 September 1189 and consecrated on 31 December 1189. [6] [7] The Diocese of London ranks third in honour in the Church of England after the Archdioceses of Canterbury and York.

Evidence from FitzNeal's writings shows that Richard had read the Institutes but that he seems to have not read the Digest ,although he may have known of it. [8]

Ralph de Warneville was the twentieth Lord Chancellor of England as well as later Bishop of Lisieux in Normandy.

William of March was a medieval Treasurer of England and a Bishop of Bath and Wells.

John Dalderby was a medieval Bishop of Lincoln.

Robert de Sigello was a medieval Bishop of London and Lord Chancellor of England.

William of Sainte-Mère-Église was a medieval Bishop of London.

Henry of Sandwich was a medieval Bishop of London. 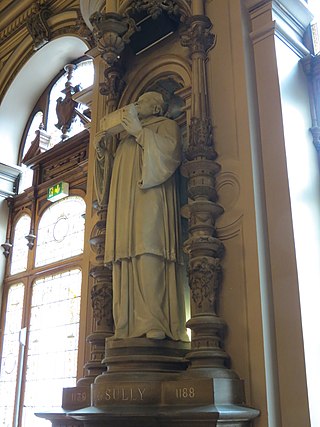 Henry de Sully was Abbot of Fécamp and Bishop-designate of Salisbury and Archbishop-elect of York.

12th-century Bishop of London and Treasurer of England
This page is based on this Wikipedia article
Text is available under the CC BY-SA 4.0 license; additional terms may apply.
Images, videos and audio are available under their respective licenses.