A rape fantasy or a ravishment is a sexual fantasy involving imagining or pretending being coerced or coercing another into sexual activity. In sexual roleplay, it involves acting out roles of coercive sex. Rape pornography is literature or images associated with rape and sometimes Stockholm syndrome as a means of sexual arousal. 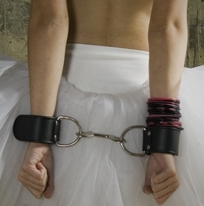