Play piercing, needle play, or recreational acupuncture is body piercing done for the purpose of enjoying the experience rather than producing a permanent body decoration. Needles, sharpened bones, or other tools used in play piercing are removed from the body when the episode is complete, allowing the wounds to heal. Those who engage in play piercing may do so for self-expression, imitating tribal rituals [ citation needed ], spiritual self-discovery, sexual pleasure, or entertainment.

Play piercing should always be carried out using new sterile hypodermic needles or acupuncture needles on skin which has been cleaned with an antiseptic such as alcohol or povidone iodine (which is a potential allergen), by people who have been properly trained. Improper technique can result in the transmission of bloodborne diseases (due to needlestick injuries, for example) or puncture wounds, but if done correctly there is far less danger of injury or infection than from being scratched by a cat due to the depth of insertion being controlled and the use of a sterilized needle.

Needles may be arranged in aesthetically pleasing configurations such as a smiley face, may be laced together like a corset, or may be used to sew on temporary decorations such as bells using sterile thread. Twisting of the needle(s) or pulling them away from the skin will also result a different type of sensation. 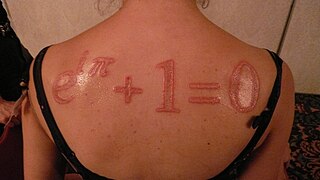 Scarifying involves scratching, etching, burning / branding, or superficially cutting designs, pictures, or words into the skin as a permanent body modification. In the process of body scarification, scars are formed by cutting or branding the skin by varying methods, to purposely influence wound healing to scar more and not scar less. Scarification is sometimes called cicatrization.

An earring is a piece of jewelry attached to the ear via a piercing in the earlobe or another external part of the ear. Earrings are worn by both sexes and have been used by different civilizations in different times. 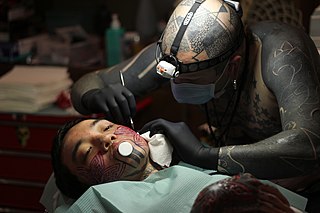 Modern primitives or urban primitives are people in developed, modern, post-colonial nations who engage in body modification rituals and practices inspired by the ceremonies, rites of passage, or bodily ornamentation in what they consider "primitive cultures". These practices may include body piercing, tattooing, play piercing, flesh hook suspension, corset training, scarification, branding, and cutting. The stated motivation for engaging in these varied practices may be personal growth, personal rites of passage, or spiritual or sexual curiosity. In contrast to their usual purposes in the originating cultures, these practices are purposely taken out of their original "primitive" [sic] cultural contexts specifically to be reinterpreted in a "modern" cultural setting. 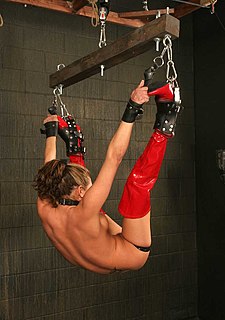 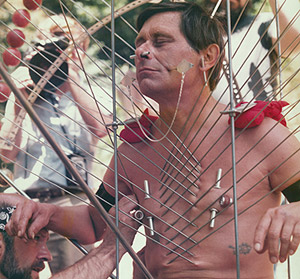 Roland Loomis, known professionally as Fakir Musafar, was an American performance artist considered to be one of the founders of the modern primitive movement.

Scalpelling is a body art procedure similar to body piercing for the creation of decorative perforations through the skin and other body tissue, and is most commonly used as a replacement for or enhancement of ear piercing. Whereas piercing is typically performed with a hollow piercing needle or an ear piercing instrument, scalpelling is performed by using a scalpel to cut a slit into the skin. Unlike dermal punching, no flesh is removed. The technique can immediately produce holes with a larger diameter than can be achieved by piercing. This is a more rapid means of accommodating larger gauge jewellery than stretching, a technique whereby piercings are enlarged by inserting gradually larger jewellery. Scalpelling is performed to quickly achieve a large-gauge piercing, when scar tissue is preventing further stretching, if tissue has thinned to the point where further stretching could cause it to break, or to combine two closely placed piercings into one hole.

Body suspension means the act of rigging a human body to hang from implements that have been placed through temporary perforations in the skin.

Stretching, in the context of body piercing, is the deliberate expansion of a healed piercing for the purpose of wearing certain types of jewelry. Ear piercings are the most commonly stretched piercings, with nasal septum piercings, tongue piercings and lip piercings/lip plates following close behind. While all piercings can be stretched to some degree, cartilage piercings are usually more difficult to stretch and more likely to form hypertrophic scars if stretched quickly. Dermal punching is generally the preferred method for accommodating larger jewelry in cartilage piercings. 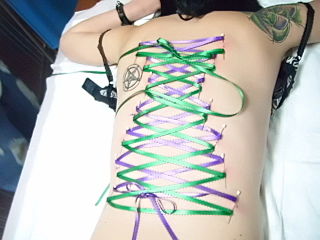 A corset piercing is a body piercing that is pierced multiple times mostly side to side to look like a corset being laced up the body. Two rows of bilaterally symmetrical piercings are performed and can be composed of as few as four piercings or as many as the length of the area being pierced and the vertical space between piercings will allow space for. Due to the difficulty and risks associated with permanently healing single surface piercings, most corset piercings are intended to be temporary. 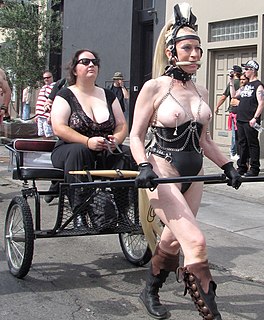 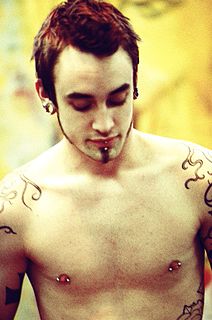 Body piercing, which is a form of body modification, is the practice of puncturing or cutting a part of the human body, creating an opening in which jewelry may be worn, or where an implant could be inserted. The word piercing can refer to the act or practice of body piercing, or to an opening in the body created by this act or practice. It can also, by metonymy, refer to the resulting decoration, or to the decorative jewelry used. Contrary to popular belief, that piercing is related to visual jewelry only, piercing implants alter body and/or skin profile and appearance. Although the history of body piercing is obscured by popular misinformation and by a lack of scholarly reference, ample evidence exists to document that it has been practiced in various forms by both sexes since ancient times throughout the world.

The Church of Body Modification is a non-theistic religion with approximately 3,500 members in the United States. The church practices body modification in order to "strengthen the bond between mind, body, and soul" and to experience the divine. 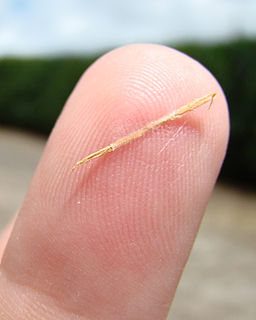 A splinter is a fragment of a larger object, or a foreign body that penetrates or is purposely injected into a body. The foreign body must be lodged inside tissue to be considered a splinter. Splinters may cause initial pain through ripping of flesh and muscle, infection through bacteria on the foreign object, and severe internal damage through migration to vital organs or bone over time.