Stoke Bishop is a medium-sized outer city suburb in the north-west of Bristol, located in between Westbury-on-Trym, Sneyd Park, and Sea Mills. Although relatively low, Stoke Bishop's population has increased due to substantial infilling on the Smelting Works sports ground and The Grove which used to belong to Clifton High school. The population of Stoke Bishop varies throughout the year because of the influx of students to the large campus of Bristol University halls of residence situated on the edge of the suburb and the Downs during term time.

Stoke Bishop is also the name of a council ward, which also includes Sneyd Park, The Downs open green space, much of the Avon Gorge. and a small area of Sea Mills along the River Trym. [2]

The suburb is concentrated around a small village hall and a row of shops on Druid Hill, with a number of small local businesses. The association with Druids arose from a megalithic monument, apparently the remains of a burial chamber, discovered in 1811 off what is now Druid Hill. [3] Druid Stoke House, a Grade II listed building west of Druid Hill, dates from the late 18th or early 19th century. [4] [5] The suburb of Druid Stoke was developed in the grounds of Druid Stoke House in the 1930s. [3]

Within Stoke Bishop there is a church, St Mary Magdalene (CofE); one primary school, Stoke Bishop C of E Primary, sometimes called Cedar Park, because of its location; and a village hall, which is used for a variety of activities from dog training to karate.

The historic Stoke House and Park lie in Stoke Bishop. The house was built in 1669 as a family mansion for Sir Robert Cann, Member of Parliament, Mayor of Bristol and Merchant Venturer. Stoke House is a Grade II* listed building [6] and is currently occupied by Trinity College, Bristol. [7]

Stoke Lodge, built in 1836, is a Grade II listed building [8] and hosts the Stoke Bishop Adult Adult Education Centre. Alongside Stoke Lodge is a playing field, arboretum and a children's play park owned by Bristol City Council, the entire site has been held as education land since 1947. The playing fields are leased on a long term basis to Cotham School; these fields are the subject of a protracted legal dispute which reached the High Court in 2018 with the decision of the court being that Bristol City Council Public Rights of way committee "erred erroneously and unlawfully" [9] when making its decision to register the playing fields as a Town/Village Green (TVG) in 2016. [10] [11] [12] [13] Following the TVG application being finally rejected in June 2018 by the Public Rights of Way committee (in light of the findings of the court), Cotham School erected new signage on the site [14] and announced plans to fence the site [15] to allow the school to use the playing field in a safe and secure manner, the fence was finally completed in March 2019. [16] [17] [18] Since the failure of the previous TVG application a new application to register the land was made to the Commons Registration Authority in September 2018, this application is yet to be decided. [19]

Next to the primary school is Bristol Croquet Club, which has had many influential international members.

In the 1930's Jared and Jethro Stride built "one-off luxury homes on plots they had bought in the area". The tradition was carried on by Jared's sons Arthur and Frederick, and later into the 1960's by their sons Leslie and Raymond. [20] The 'Stride brothers' specialised in constructing individual style homes with the emphasis on location, finish and design. each house was built to a unique design - no two are the same - and well fitted out with oak floors, wood-panelled rooms and central heating. [21]

The small Roman port of Abona, now Sea Mills, at the mouth of the River Trym was used by the military forces passing in transit to settlements in what is now South Wales. There are ruins of a small Roman villa at the entrance to Roman Way from the Portway. The Roman legionaries had a transit camp on what were the grounds of Nazareth House (a Roman Catholic Orphanage) near that villa. Nazareth House was then demolished in 1970. [22] Bombs fell in Roman Way during the Second World War, destroying one house completely. 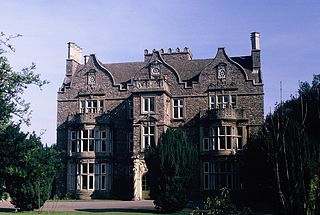 Cotham is the name of both a council ward of the city of Bristol in the Southwest of England, United Kingdom, and a suburb of the city that falls within that ward. The ward comprises the Cotham suburb, and a small portion of Redland, which is another Bristol suburb.

Edward Colston was an English merchant, slave trader, Tory Member of Parliament, and philanthropist. Born in Bristol to a family of merchants that had lived in the city since the 1340s, he became a merchant, initially trading in wine, fruits and cloth, mainly in Spain, Portugal and other European ports. In 1680, he became heavily involved in the slave trade through his membership of the Royal African Company, which held a monopoly of the British trade in African slaves. He became Deputy Governor, the highest office of the company, in 1689. It is uncertain exactly how much of his wealth stemmed from the slave trade.

Bristol West is a borough constituency represented in the House of Commons of the Parliament of the United Kingdom since 2015 by Thangam Debbonaire of the Labour Party. It covers the central and western parts of Bristol. 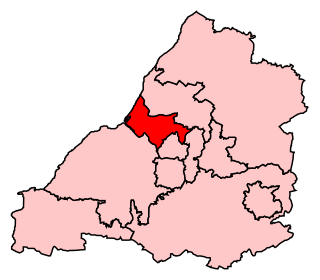 Bristol North West is a constituency to the north and north-west of Bristol city centre.

Redland is an affluent suburb in Bristol, England. The suburb is situated between Clifton, Cotham, Bishopston and Westbury Park. The boundaries of the district are not precisely defined, but are generally taken to be Whiteladies Road in the west, the Severn Beach railway line in the south and Cranbrook Road in the east.

Henleaze is a northern suburb of the city of Bristol in South West England.

Shirehampton is a district of Bristol in England, near Avonmouth at the northwestern edge of the city.

Westbury on Trym is a suburb and council ward in the north of the City of Bristol, near the suburbs of Stoke Bishop, Westbury Park, Henleaze, Southmead and Henbury, in the southwest of England.

Sea Mills is a suburb of the English port city of Bristol. It is situated some 3.5 miles (6 km) north-west of the city centre, towards the seaward end of the Avon Gorge, lying between the former villages of Shirehampton to the west and Westbury-on-Trym & Stoke Bishop to the east, at the mouth of the River Trym where it joins the River Avon. Sea Mills forms part of the city ward of Kingsweston. Despite Roman remains, its place in the history of the area before the 20th Century is small.

Sneyd Park is a suburb of Bristol, England, lying on the western fringe of Clifton Down, adjacent to the Avon Gorge and the Sea Walls observation point. It is part of the Stoke Bishop district. Home to many millionaires, Sneyd Park was originally developed in Victorian times. Many Victorian and Edwardian villas line the edge of the Downs. More modern housing has since been built down over the slope, towards Sea Mills, Bristol. Much of this development was carried out by the Stride family builders whose practice was "to purchase an estate freehold and to erect thereon their own houses, with the knowledge that none will be able to come along and dump a lot of cheap houses down in the neighbourhood, thereby spoiling the amenities of the place and detracting from the value of the houses erected by the firm." The 'Stride brothers' specialised in constructing individual style homes with the emphasis on location, finish and design. Buildings were never duplicated and no two were built to the same design. They often have solid oak interior doors, oak-panelled hallways, the hallmark Stride letterboxes and impressive staircases. Brothers Jared and Jethro Stride founded the business in the 1930s, followed by Jared's sons Arthur and Frederick, and then their sons Leslie and Raymond.

Coombe Dingle is a suburb of Bristol, England, centred near where the Hazel Brook tributary of the River Trym emerges from a limestone gorge bisecting the Blaise Castle Estate to join the main course of the Trym. Historically this area formed part of the parish of Westbury on Trym, Gloucestershire, and is now part of Kingsweston ward of the city of Bristol. South of Coombe Dingle is Sea Mills; to the north is Kings Weston Hill; to the west are Kings Weston House and Shirehampton Park; and to the east, Henbury Golf Club and Westbury on Trym proper.

The city of Bristol is divided into many areas, which often overlap or have non-fixed borders. These include Parliamentary constituencies, council wards and unofficial neighbourhoods. There are no civil parishes in Bristol.

Redland High School for Girls was a selective and independent, non-denominational girls' school in the suburb of Redland, Bristol, England. The school merged with The Red Maids' School in May 2016, with the new merged school named Redmaids' High School and based at the Red Maids' site from September 2017 in Westbury-on-Trym.

Redland Parish Church is a Georgian church, built in 1742, in the Redland suburb of Bristol, England. It is a Grade I listed building.

Redland Green is a park in the Bristol suburb of Redland. The park consists of a grassland area and an area of scrub and woodland managed as wildlife habitats by Bristol City Council in partnership with local community groups. A major event each year is Redland May Fair, organised by Redland and Cotham Amenities Society, which has been held annually for over 25 years on the first Monday in May and is opened each year by the Bristol street band The Ambling Band.

Cotham School is a secondary school with co-operative academy status in Cotham, a suburb of Bristol, England. The catchment area for this school is Cotham, Clifton, Kingsdown and southern Redland.

Bristol Free School (BFS) is a Secondary Academy which opened in Southmead, Bristol, England, in September 2011.