The Thomas Sloan Boyd House (also known as the Boyd-Barton House) is a historic house located at 220 Park Avenue in Lonoke, Arkansas. 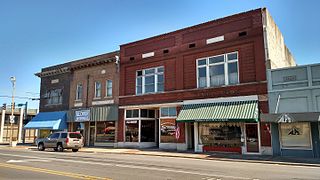 Lonoke is the second most populous city in Lonoke County, Arkansas, United States, and serves as its county seat. According to 2010 United States Census, the population of the city is 4,245. It is part of the Little Rock–North Little Rock–Conway Metropolitan Statistical Area.

It is a T-shaped, two-story brick structure, built out of locally-made bricks in about 1873 by Thomas Sloan Boyd, a local farmer. A full-height porch extends across the facade, supported by square brick columns, added in 1913. It is the oldest brick building in the city. [2]

The house was listed on the National Register of Historic Places on January 1, 1976. [1] 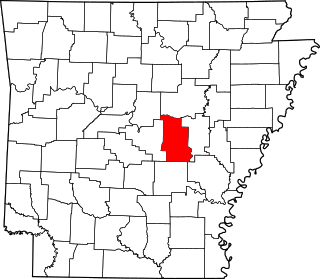 This is a list of the National Register of Historic Places listings in Lonoke County, Arkansas.

The Walls House, known also as the McCrary House, is a historic house at 406 Jefferson Street in Lonoke, Arkansas. It is a ​2 1⁄2-story wood-frame structure, with a side-gable roof and weatherboard siding. Its Colonial Revival styling includes a projecting front portico, with paired Tuscan columns supporting an entablature and balustraded balcony, above which rises a large gabled dormer with exposed rafter ends. The house was built in 1913 to a design by Charles L. Thompson.

The Eagle House is a historic house at 217 Ash Street in Lonoke, Arkansas. It is a large two story Bungalow/Craftsman style house, with a cross-gable roof configuration, and an exterior of yellow brick and half-timbered stucco. A long single-story porch extends across the front, supported by brick piers and large curved brackets. The house was designed by architect Charles L. Thompson and built in 1915.

The Joe P. Eagle and D. R. Boone Building is a historic commercial building at 105-107 West Front Street in downtown Lonoke, Arkansas. It is a two-story red brick building, with a sloping flat roof obscured by parapet, and a brick foundation. It is divided into two sections, articulated by brick pilasters. The left half has an original storefront on the first floor, with plate glass display windows flanking a recessed entrance, while the right half has a more modern (1960s) appearance, with a central display window, with the store entrance on the right and a building entrance to the upper floor on the left. The second-floor on both halves has tripled sash windows, the center one larger, all topped by transom windows. The building was designed by architect Charles L. Thompson and built in 1905.

John Parks Almand was an American architect who practiced in Arkansas from 1912 to 1962. Among other works, he designed the Art Deco Hot Springs Medical Arts Building, which was the tallest building in Arkansas from 1930 to 1958. Several of his works, including the Medical Arts Building and Little Rock Central High School, are listed on the National Register of Historic Places.

The First Presbyterian Church is a historic church at 304 S. Center St. in downtown Lonoke, Arkansas. It is a single story brick building, with a gabled roof and concrete foundation. The brick is laid in running bond, and the gable ends are clad in shingles, but were originally finished in half-timbered stucco, in the Tudor Revival style. The church was built in 1919 to a design by architect John Parks Almand, and is the city's best example of ecclesiastical Tudor Revival architecture.

The Carlisle Rock Island Depot is a historic railroad station at Main and Court Streets in Carlisle, Arkansas. It is a 1-1/2 story masonry and frame structure, finished in brick with half-timbered stucco. A passenger station, it was organized with a central service area for ticketing and telegrapher's bay, with waiting rooms on either side, one for whites, and one for African-Americans. The station was built about 1920 by the Rock Island Railroad; it is a prominent local example of Tudor Revival style, and is historically significant for its role in the growth of the city of Carlisle.

The Carver Gymnasium is a historic school building at 400 Ferguson Street in Lonoke, Arkansas. It is a vernacular single-story structure, built out of concrete blocks and capped by a gabled metal roof. The gable ends are clad in metal siding, and there are irregularly spaced awning windows on the walls. It was built in 1957 for the Carver School, the segregated facility serving Lonoke's African-American students, and is its last surviving building. After the city's schools were integrated in 1970, the school complex served as its junior high school, and was vacated by the school system in 2005.

The Lonoke Confederate Monument is located in central downtown Lonoke, Arkansas, on the grounds of the Lonoke County Courthouse. It is a marble depiction of a Confederate Army soldier, 6 feet (1.8 m) in height, mounted on a square columnar base almost 15 feet (4.6 m) tall. The soldier holds a rifle, its butt resting on the ground, and carries a bedroll. He has a belt on which there are a canteen and bayonet. The statue was commissioned by the local chapter of the United Daughters of the Confederacy and was unveiled in 1910.

The Lonoke Downtown Historic District encompasses a portion of the central business district of Lonoke, Arkansas. It extends south along Center Street, from the Lonoke County Courthouse to Front Street, and then one block east and west on both sides of Front Street. It extends eastward on the south side of Front Street another 1-1/2 blocks. Lonoke was founded as a railroad community in 1862, and this area represents the core of its downtown area for the period 1900-1945. Most of the district's 23 buildings are commercial structures, one to two stories in height, with brick facades. 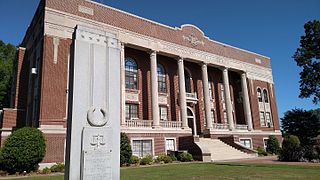 The Lonoke County Courthouse is located at 301 North Center Street in downtown Lonoke, the county seat of Lonoke County, Arkansas. It is a four-story masonry structure, finished in red brick, with cast stone trim and a raised brick basement. The main facade has its entrance recessed behind an arcade of two-story Doric columns. It was built in 1928 to a design by Little Rock architect H. Ray Burks.

The former Rock Island Depot is a historic railroad station at the junction of Front and Center Streets in downtown Lonoke, Arkansas. It is a long, rectangular brick building, topped by a steeply-pitched gabled tile roof. Its gable ends are partially stepped and raised above the roof pitch in the Jacobethan style. It stands south of the area where the Rock Island Line railroad tracks ran, and has a three-sided telegrapher's booth projecting from its north side. It was built in 1912, and served as a passenger and freight station for many years, and now houses the local chamber of commerce.

The W.P. Fletcher House is a historic house at 604 West Fourth Street in Lonoke, Arkansas. It is a 2-1/2 story L-shaped wood frame structure, with a hip-roofed main block and a gabled ell to the rear. It is clad in weatherboard and set on a foundation of brick piers. A hip-roofed single-story porch extends across two sides, with gabled sections on each side. The oldest portion of the house is the ell, which was built about 1880, with the main block added in 1903. The 1903 Colonial Revival house was built for William P. Fletcher, a leading businessman in the locally important rice growing and processing industry.

The Sears House is a historic house on Moss Lane, southeast of the junction of Arkansas Highways 38 and 319 in Austin, Arkansas. It is a single story wood frame structure, with a side gable roof, weatherboard siding, and a foundation of wood and concrete blocks. The roof gable is bracketed in the Italianate style, while the main entrance is sheltered by a project gabled Greek Revival portico. The house was built about 1860 and is a rare surviving example of an antebellum late Greek Revival-Italianate house.

The Shull House is a historic house at 418 Park Avenue in Lonoke, Arkansas. It is a large 1-1/2 story building, its exterior clad in a combination of half-timbered stucco and brick. The roof is tiled, with clipped gables and eaves that show exposed rafter ends in the American Craftsman style. Windows are typically multipane casement windows in groups. The house was built in 1918 to a design by Thompson and Harding.

The Trimble House is a historic house at 518 Center Street in Lonoke, Arkansas. It is a large 2-1/2 story wood frame structure, with a tall gabled roof. A large gabled section relieves the left side of the gable, and a gable section projects from the front, from which the entry porch, also gabled, projects. Built in 1916, it is a fine example of Craftsman architecture, designed by Charles L. Thompson.

The Trimble-McCrary House is a historic house at 516 Jefferson Street in Lonoke, Arkansas. It is a two-story wood frame structure, with a truncated hip roof, an exterior of clapboards and wooden shingles, and a brick foundation. It has Folk Victorian styling, including a two-story spindlework porch, and fish-scale shingling on parts of its walls. The house was built about 1885 for Judge Jacob Chapline, a lawyer who was influential in the establishment of Lonoke County, and who served in the state legislature.

The Dr. E.F. Utley House is a historic house at 401 West Pine Street in Cabot, Arkansas. It is a ​2 1⁄2-story wood-frame American Foursquare house, with a hip roof, weatherboard siding, and a brick foundation. The roof has gabled dormers that are finished in diamond-cut wooden shingles. A single-story porch extends across the front and wraps around the side, supported by tapered square columns. The house was built sometime between 1914 and 1922, and is Cabot's best example of a Colonial Revival Foursquare.

The Walls Farm Barn and Corn Crib were historic farm outbuildings in rural southern Lonoke County, Arkansas. The barn was a two-story gable-roofed structure, with a broad central hall and a shed-roof extension to one side. The corn crib was a single story frame structure, with a gable-roofed center and shed-roofed extensions around each side. They were built c. 1907-08, and were relatively unaltered examples of period farm architecture when they were listed on the National Register of Historic Places in 1995. The buildings have been listed as destroyed in the Arkansas Historic Preservation Program database.

The Wheat House is a historic house at 600 Center Street in Lonoke, Arkansas. It is a two-story wood frame structure, with a hip roof and weatherboard siding. Its massing and relatively modest styling are characteristic of the Georgian Revival, although it has a fairly elaborate entry porch, supported by slender Tuscan columns and pilasters. Dentil moulding is found at the base of the main cornice, and those that top the windows. Built c. 1910 to a design by Charles L. Thompson, it is one of Lonoke's largest and most sophisticated houses.