ThreadX was originally developed and marketed by Express Logic of San Diego, California, United States. The author of ThreadX (and the original author of the Nucleus RTOS in 1990) is William Lamie, [2] who was also President and CEO of Express Logic.

Express Logic was purchased for an undisclosed sum by Microsoft on April 18, 2019. [3]

ThreadX is the foundation of Express Logic's X-Ware Internet of things (IoT) platform, which also includes embedded file system support (FileX), embedded UI support (GUIX), embedded Internet protocol suite (TCP/IP) and cloud connectivity (NetX/NetX Duo), and Universal Serial Bus (USB) support (USBX). ThreadX has won high appraisal from developers and is a very popular RTOS. [4] As of 2017 [update] , according to marketing research firm VDC Research, the ThreadX RTOS has become one of the most popular RTOSes in the world, having been deployed in over 6.2 billion devices, including consumer electronics, medical devices, data networking applications, and SoCs. [5]

ThreadX is distributed using a marketing model in which source code is provided and licenses are royalty-free.

FileX – the embedded file system for ThreadX was introduced in 1999.

NetX – the embedded TCP/IP networking stack for ThreadX was introduced in 2002.

USBX – the embedded USB support for ThreadX was introduced in 2004.

ThreadX SMP for SMP multi-core environments was introduced in 2009.

ThreadX Modules was introduced in 2011.

GUIX – the embedded UI for ThreadX was introduced in 2014.

Express Logic was purchased for an undisclosed sum by Microsoft on April 18, 2019. [3]

ThreadX implements a priority-based, preemptive scheduling algorithm with a proprietary feature called preemption-threshold. The latter has been shown to provide greater granularity within critical sections, reduce context switches, and has been the subject of academic research on guaranteeing scheduling. [6]

ThreadX provides a unique construct called event chaining, [7] where the application can register a callback function on all application programming interfaces (APIs) that can signal an external event. This helps applications chain together various public objects in ThreadX such that one thread can effectively block on multiple objects.

FileX is the embedded file system for ThreadX. FileX supports FAT12, 16, 32, and exFAT formats. The latter extends FAT file sizes beyond 4 GB, which is especially useful for video files, and it requires license directly from Microsoft for use. FileX also offers fault tolerance and supports direct NOR and NAND flash memory media through a flash wear leveling product called LevelX.

ThreadX has also been certified to DO-178 standards by various military and aerospace companies. It is supported by popular Transport Layer Security (SSL/TLS) libraries such as wolfSSL. [9]

As of 2017, ThreadX is packaged as part of X-Ware IoT Platform in full source code and with no runtime royalty payment.

The Raspberry Pi line of single-board computers runs ThreadX as a binary blob on the graphics processing unit (GPU). This controls initial booting, which in turn is used to boot secondary operating systems such as Linux, and continues to operate in a more privileged role even after the boot process. [11] 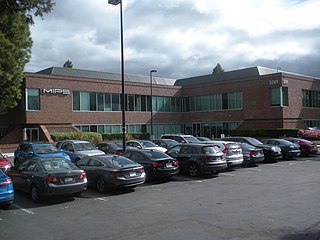 MIPS Technologies, Inc., formerly MIPS Computer Systems, Inc., was an American fabless semiconductor design company that is most widely known for developing the MIPS architecture and a series of RISC CPU chips based on it. MIPS provides processor architectures and cores for digital home, networking, embedded, Internet of things and mobile applications. 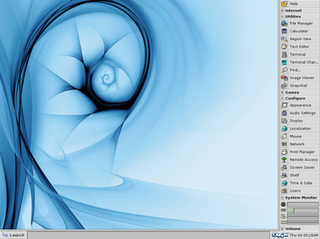 pSOS is a real-time operating system (RTOS), created in about 1982 by Alfred Chao, and developed and marketed for the first part of its life by his company Software Components Group (SCG). In the 1980s, pSOS rapidly became the RTOS of choice for all embedded systems based on the Motorola 68000 series family architecture, because it was written in 68000 assembly language and was highly optimised from the start. It was also modularised, with early support for OS-aware debugging, plug-in device drivers, Internet protocol suite (TCP/IP) stacks, language libraries, and disk subsystems. Later came source code level debugging, multiprocessing support, and further computer networking extensions. 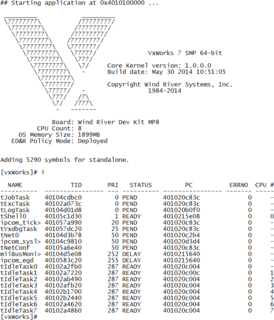 VxWorks is a real-time operating system (RTOS) developed as proprietary software by Wind River Systems, a wholly owned subsidiary of TPG Capital, US. First released in 1987, VxWorks is designed for use in embedded systems requiring real-time, deterministic performance and, in many cases, safety and security certification, for industries, such as aerospace and defense, medical devices, industrial equipment, robotics, energy, transportation, network infrastructure, automotive, and consumer electronics.

FreeRTOS is a real-time operating system kernel for embedded devices that has been ported to 35 microcontroller platforms. It is distributed under an MIT License.

Segger Microcontroller, founded in 1992, is a private company active in the industry of embedded systems. It provides products used to develop and manufacture embedded systems, in 4 categories: real-time operating systems (RTOS) and software libraries (middleware), debugging and trace probes, programming tools and in-system programmers. The company is headquartered in Monheim am Rhein, Germany with offices in the United States in Gardner, Massachusetts and Milpitas, California, and in China in Shanghai. 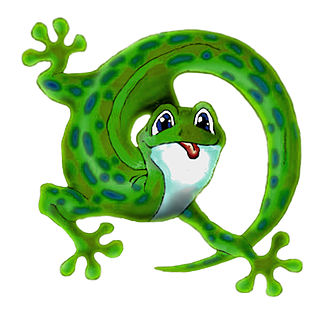 ChibiOS/RT is a compact and fast real-time operating system supporting multiple architectures and released under a mix of the GNU General Public License version 3 (GPL3) and the Apache License 2.0. It is developed by Giovanni Di Sirio.

Huawei LiteOS is a lightweight real-time operating system (RTOS) developed by Huawei. It is an open source, POSIX compliant operating system for Internet of things (IoT) devices, released under a three-clause BSD license. Microcontrollers of different architectures such as ARM, x86, and RISC-V are supported by the project. Huawei LiteOS is part of Huawei's '1+8+N' Internet of Things solution, and has been featured in a number of open source development kits and industry offerings.

NuttX is a real-time operating system (RTOS) with an emphasis on technical standards compliance and small size. Scalable from 8-bit to 64-bit microcontroller environments, the main governing standards in NuttX are from the Portable Operating System Interface (POSIX) and the American National Standards Institute (ANSI). Further standard application programming interfaces (APIs) from Unix and other common RTOSes are adopted for functions unavailable under these standards, or inappropriate for deeply embedded environments, such as the fork system call.

OVPsim is a multiprocessor platform emulator used to run unchanged production binaries of the target hardware. It has public APIs allowing users to create their own processor, peripheral and platform models. Various models are available as open source. OVPsim is a key component of the Open Virtual Platforms initiative (OVP), an organization created to promote the use of open virtual platforms for embedded software development. OVPSim requires OVP registration to download.

Creator is a family of single-board computers developed by Imagination Technologies to promote educational research and software development based on the MIPS architecture. The first board in the platform, the Creator Ci20, was released in August 2014. A second development kit called Creator Ci40 was introduced through a Kickstarter campaign in November 2015. 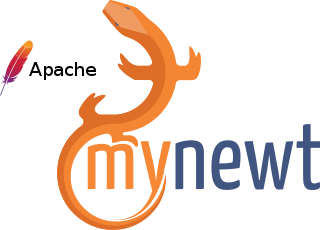 Apache Mynewt is a modular real-time operating system for connected Internet of things (IoT) devices that must operate for long times under power, memory, and storage constraints. It is free and open-source software incubating under the Apache Software Foundation, with source code distributed under the Apache License 2.0, a permissive license that is conducive to commercial adoption of open-source software.

Since 1985, many processors implementing some version of the MIPS architecture have been designed and used widely.

PSA Certified is a security certification scheme for Internet of Things (IoT) hardware, software and devices. It was created by seven stakeholder companies as part of a global partnership. The security scheme was created by Arm Holdings, Brightsight, CAICT, Prove & Run, Riscure, TrustCB and UL.