The Threlkeld House is a historic house at 1301 North Boston Avenue in Russellville, Arkansas. It is a ​1 1⁄2-story wood frame structure, with a gable roof and weatherboard siding. At one corner, a recessed porch is supported by square posts, the corner one mounted on a pier of rusticated concrete blocks. The house was built in 1914, and is unusual as an early vernacular ("Plain Traditional") house in a neighborhood of later houses featuring other styles. The house was owned until 1995 by members of the Threlkeld family. [2]

Russellville is the county seat and largest city in Pope County, Arkansas, United States, with a population of 27,920, according to the 2010 Census. It is home to Arkansas Tech University and Arkansas Nuclear One, Arkansas' only nuclear power plant. Russellville borders Lake Dardanelle and the Arkansas River.

The house was listed on the National Register of Historic Places in 2000. [1]

This is a list of the National Register of Historic Places listings in Pope County, Arkansas.

The Foster House is a historic house at 303 North Hervey Street in Hope, Arkansas. The two-story wood frame house was designed by Charles L. Thompson and built c. 1912. It is a fine local example of Bungalow/Craftsman style, with flared eaves and a full-length front porch supported by box columns, which are, in a Thompson signature, clustered in threes at the corners. The porch roof, dormer, and eave have classic Craftsman features, including exposed rafters and brackets. It is one of three Thompson designs in Hope.

The Bozeman House is a historic house in rural Clark County, Arkansas. It is located on the north side of Arkansas Highway 26, several miles west of Arkadelphia, the county seat. It is a 1-1/2 story wood frame house with Greek Revival styling. The house was built c. 1847 by Michael Bozeman, one of the county's early settlers, and is one of the oldest structures standing in the county. The main block is five bays wide, with a pedimented portico above the entrance on the southern facade. A kitchen ell extends to the rear of the house from the northwestern corner, giving the house an L-shape. The roof the main facade is pierced by a pair of gabled dormers. The trim detailing includes entablatures and dentil moulding.

The Hawkins House is a historic house at the northwest corner of 3rd Avenue and 3rd Street in Foreman, Arkansas. It is a 2-1/2 story wood frame structure, built in 1912, and is one of the city's few surviving properties from its boom period in the early 20th century, dating to the arrival of the railroad. It is a vernacular Foursquare house, given an L shape by the attachment of a hip-roofed ell to its northwestern corner. Its front elevation is dominated by a two-story recessed porch, supported by concrete block columns.

The Alvah Horace Whitmarsh House is a historic house at 711 Pecan Street in Texarkana, Arkansas. This 2-1/2 story wood frame structure is one of the city's finest Queen Anne Victorians, located in a neighborhood that was fashionable at the turn of the 20th century. The house has an elaborately decorated front porch and a three-story hexagonal tower, capped by a pointed roof, at its northeast corner. The house was built in 1894 for Alvah Whitmarsh, a manager at the local Buchanan Lumber Company and a local leader in civic affairs.

The Sherman Bates House is a historic house at the northeast corner of Echo Lane and United States Route 63 in Hardy, Arkansas. It is a 1-1/2 story fieldstone structure with vernacular Tudor Revival styling. Its prominent features include a fieldstone chimney on the right side of the main facade, and a projecting stone porch on the left. The corners of the chimney and porch are fitted with carefully cut stones. The house was built in 1940 by Sherman Bates, owner of a local bulk fuel oil business. Bates owned the house until he enlisted in World War II; the house's subsequent owners were also prominent local businessmen. 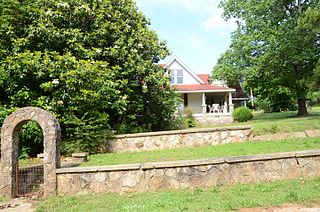 The Sam Davison House is a historic house on Cammack Street in Evening Shade, Arkansas. Set on a corner lot behind sandstone retaining walls, it is a 1-1/2 story wood frame structure with an ell extending to the north. Built c. 1880 by a prominent local lawyer, the house is one of a modest number of 19th century houses in the community, and is architecturally distinctive for its 1920s era porch, which wraps around three sides and features Craftsman style exposed rafter tails.

The Jones House is a historic house at 220 Bush Street in Sulphur Springs, Benton County, Arkansas. It is a 2-1/2 story wood frame structure with a T shape and cross gable roof. The front facade, one of the ends of the crosspiece of the T, has beveled corners with the roof overhanging above the second floor, an Eastlake element. A porch wraps around the stem of the T, which extends to the south. It is supported by turned columns and features a spindled frieze. Built c. 1896, it is a fine and well-preserved example of Eastlake-style architecture.

The Thurmond House is a historic house at 407 Britt in Siloam Springs, Arkansas. It is an American Foursquare wood frame house, 2-1/2 stories in height with a wide hip roof. It is finished in novelty siding, with distinctive corner boards topped by capitals. A single-story porch, with a concrete base and piers, extends across the width of the front facade. The second level has a small central window flanked by trios of narrow one-over-one sash; there is a hip-roof dormer in the roof. Built c. 1910, the house is typical of many Foursquare houses built around that time, but is set off by its porch and corner boards.

The Baldock House is a historic house at the southeast corner of South Elm Street and Woodruff Avenue in Searcy, Arkansas. It is a 1-1/2 story brick building with a clipped-gable roof and a full-width porch that wraps around to the east side. The northern (front) slope of the roof is pierced by three pedimented gable-roof dormers, the central one larger and housing two sash windows. Built c. 1910, this is house is one of six brick houses to survive from the early 20th century in White County. 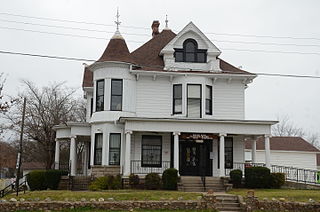 The Martone House is a historic house at 705 Malvern Avenue in Hot Springs, Arkansas. It is a 2-1/2 story wood frame structure, with a hip roof, clapboard siding, and a stone foundation. It has Queen Anne Victorian styling, with a gabled projecting window bay, rounded turret projecting at one corner, and a wraparound porch. It was built in 1907 for Thomas and Nina (Cascoldt) Doherty, and is notable as one of Hot Springs' first motel properties, as it was where the Dohertys not only let rooms in the house, but also built cabins to the rear of the property to house more visitors.

The Harley E. Green House is a historic house on Arkansas Highway 926, just north of Bear, Arkansas. It is a 2-1/2 story wood frame structure, built in a cross-gable configuration with shed-roof sections in the corners of the cross. Some of these corner sections are enclosed, adding to the mass of the interior, while others shelter porches. The exterior and interior of the house both exhibit the detailed woodwork typical of the Stick/Eastlake style. The house was built in 1888 by Harley Green, a local woodworker, during Bear's brief boom period as a gold and silver mining town. Of more than fifty houses estimated to have been built by him, it is one of only four to survive.

The Short-Dodson House is a historic house at 755 Park Avenue in Hot Springs, Arkansas. It is a 2-1/2 story masonry structure, its exterior finished in a combination of stone, brick, and wood. It has asymmetrical massing with projecting gables of varying sizes and shapes, and a round corner turret, with an undulating single-story porch wrapping around its south side. It was designed by Joseph G. Horn, and built c. 1902 for Dr. Omar Short, one of many doctors whose homes lined Park Avenue.

The R.E. Lee House is a historic house at 1302 West 2nd Street in Pine Bluff, Arkansas. It is a 1-1/2 story wood frame structure, with asymmetrical massing and complex roof line characteristic of the Queen Anne period of architecture. The house is set on a lot with an original period wrought iron fence. A three-story corner tower with bellcast six-side roof projects from one corner, with an elaborately decorated Eastlake-style porch sheltering its entrance. Built in 1893, it is an outstanding local example of the Queen Anne style. 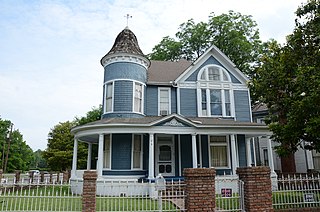 The Roth-Rosenzweig House is a historic house at 717 West 2nd Avenue in Pine Bluff, Arkansas. It is a ​2 1⁄2-story wood-frame structure, with a wraparound porch and ​2 1⁄2-story turret at the corner. The porch is supported by Tuscan columns, and has a small decorated gable above the stairs. The turret is clad in decoratively cut shingles, which are also banded on the main house gables. The interior has well-preserved period woodwork and finishes. The house was built in 1894, and is one Pine Bluff's finer examples of the Queen Anne style.

The Trulock-Cook House is a historic house at 703 West 2nd Avenue in Pine Bluff, Arkansas. It is a 1-1/2 story wood frame structure, built about 1903 in an unusual combination of Shingle and Colonial Revival styles. It has a two-stage gambrel roof, which slopes down in one section to form the roof of a single-story porch that wraps around the porch on the southwest corner. The porch also wraps around a semicircular bay that rises above the main entrance, and is supported by Tuscan columns. The house is one of Pine Bluff's few surviving Shingle style buildings.

The Ashley-Alexander House is a historic house located at 3514 Walkers Corner Road near Scott, Arkansas.

The Matthews-Bradshaw House is a historic house at 524 Skyline Drive in North Little Rock, Arkansas. It is a single-story masonry structure, its exterior clad in brick and stone. A conical turreted section with diamond-pane windows projects from one corner, and the gable above the main entrance is finished in half-timbered stucco. Built in 1929 by the Justin Matthews Company as part of its Park Hill development, it is the only example Matthews built of the French Eclectic style. It was designed by Frank Carmean, the Matthews Company architect.

The Hugh L. King House is a historic house at 110 West Spring Street in Heber Springs, Arkansas. It is a 2-1/2 story L-shaped wood frame house, with an eclectic combination of Queen Anne and Italianate features. It has a two-story polygonal turreted projection at one corner, and a wraparound porch with delicate turned posts. Although most of the exterior is finished in weatherboard, portions are finished in decorative cut shingles. The oldest portion of the house was built about 1882; it achieved its present form and style c. 1893-4 with a major addition. 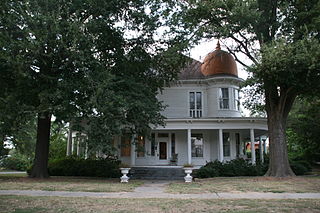 The Aycock House is a historic house located at 410 West Church Street in Morrilton, Arkansas.

The Kimball House is a historic house at 713 North Front Street in Dardanelle, Arkansas. It is a two-story brick building, covered by a hip roof, with a single-story porch extending across the front, supported by square posts with chamfered corners and moulded capitals. The building corners have brick quoining, and the roof eave has paired brackets in the Italianate style. Windows are set in segmented-arch openings. Built in 1876, it is one of the city's finest examples of Italianate architecture.