Threskiornis is a genus of ibises, wading birds of the family Threskiornithidae. They occur in the warmer parts of the Old World in southern Asia, Australasia and Sub-Saharan Africa. They are colonial breeders, which build a stick nest in a tree or bush and lay two to four eggs. They occur in marshy wetlands and feed on various fish, frogs, crustaceans and insects, in English, they are called sacred ibises.

Adult Threskiornis ibises are typically 75 cm long and have white body plumage. The bald head, neck and legs are black. The bill is thick and curved. Sexes are similar, but juveniles have whiter necks duller plumage. The straw-necked ibis differs from the other species in having dark upperparts, and is some times placed in the separate genus Carphibis (Jameson, 1835) as Carphibis spinicollis. A flightless species, the Reunion ibis, became extinct in the 18th century. 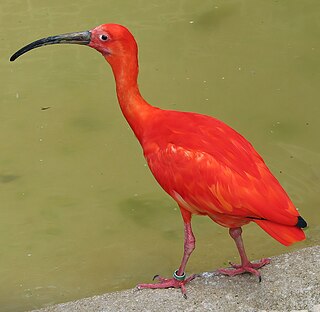 The family Threskiornithidae includes 34 species of large wading birds. The family has been traditionally classified into two subfamilies, the ibises and the spoonbills; however recent genetic studies are casting doubt on the arrangement, and revealing the spoonbills to be nested within the old world ibises, and the new world ibises as an early offshoot. 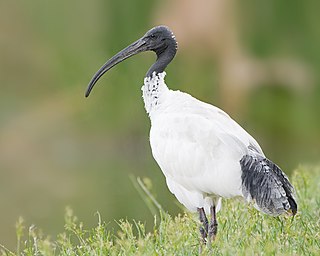 The herons are long-legged, long-necked, freshwater and coastal birds in the family Ardeidae, with 64 recognised species, some of which are referred to as egrets or bitterns rather than herons. Members of the genera Botaurus and Ixobrychus are referred to as bitterns, and, together with the zigzag heron, or zigzag bittern, in the monotypic genus Zebrilus, form a monophyletic group within the Ardeidae. Egrets do not form a biologically distinct group from herons, and tend to be named differently because they are mainly white or have decorative plumes in breeding plumage. Herons, by evolutionary adaptation, have long beaks.

The Réunion ibis or Réunion sacred ibis is an extinct species of ibis that was endemic to the volcanic island of Réunion in the Indian Ocean. The first subfossil remains were found in 1974, and the ibis was first scientifically described in 1987. Its closest relatives are the Malagasy sacred ibis, the African sacred ibis, and the straw-necked ibis. Travellers' accounts from the 17th and 18th centuries described a white bird on Réunion that flew with difficulty and preferred solitude, which was subsequently referred to as the "Réunion solitaire".

The black-headed ibis, also known as the Oriental white ibis, Indian white ibis, and black-necked ibis, is a species of wading bird of the ibis family Threskiornithidae which breeds in the South and Southeast Asia from India to the west and as far east as Japan. It is the only native ibis species in its range that has an overall white plumage with a black neck and head. The down-curved beak and legs are also black. Though often referred to as a wetland species, the black-headed ibis forages in a range of natural and man-made habitats. This species of ibis nests only during the rainy season.

The African sacred ibis is a species of ibis, a wading bird of the family Threskiornithidae. It is native to Africa and the Middle East. It is especially known for its role in the religion of the Ancient Egyptians, where it was linked to the god Thoth; despite this, the species is currently extirpated from Egypt.

Egretta is a genus of medium-sized herons, mostly breeding in warmer climates.

Ciconia is a genus of birds in the stork family. Six of the seven living species occur in the Old World, but the maguari stork has a South American range. In addition, fossils suggest that Ciconia storks were somewhat more common in the tropical Americas in prehistoric times. 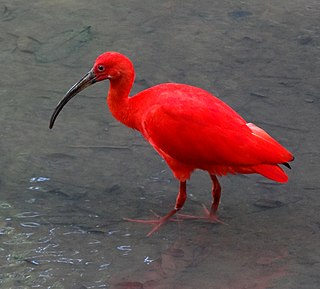 The straw-necked ibis is a bird of the ibis and spoonbill family Threskiornithidae. It can be found throughout Australia, New Guinea, and parts of Indonesia. Adults have distinctive straw-like feathers on their necks. 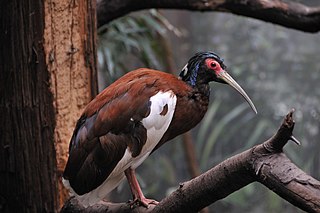 The Madagascar ibis, also known as the Madagascar crested ibis, white-winged ibis or crested wood ibis, is a medium-sized, brown-plumaged ibis. It has bare red orbital skin, yellow bill, red legs, white wings and its head is partially bare with a dense crest of green or gloss blue and white plumes on the nape. The Madagascar ibis is the only member of the genus Lophotibis. 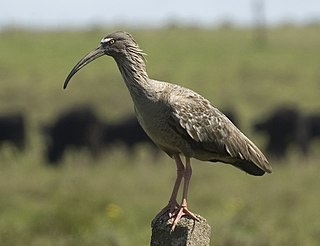 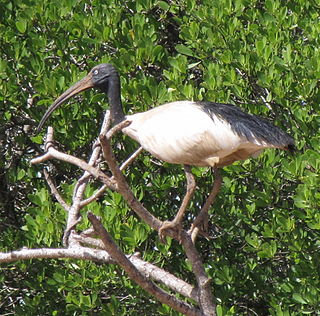 The Malagasy sacred ibis is a relatively large, heavily built ibis endemic to the west coast of Madagascar, and Aldabra on the Seychelles.

The Solomons white ibis or Solomon Islands white ibis, known locally as the tagoa, is a distinct, dwarf subspecies of the Australian white ibis. It is sometimes considered a full species Threskiornis pygmaeus. It is found only on Rennell and Bellona Islands, in the Solomon Islands of Melanesia, in the south-west Pacific Ocean.