Thurrock services is a motorway service station in Thurrock, Essex, serving the M25 motorway, and the Dartford Crossing (A282). It was planned in the mid-1980s and opened after the M25 was completed. Originally popular, the services have gradually deteriorated and have attracted criticism for poor facilities. They have also been a magnet for drug trafficking and other criminal activities.

The service area, owned by Moto, is accessible from junction 30 and 31 of the M25 motorway. Amenities include a Travelodge hotel. The main entrance leads onto a first floor concourse containing shops and food services. The toilets are located on the ground floor. [2]

Part of the service station overlooks a lake, which was constructed from a former gravel pit. [2]

The site was offered for sale by the landowner to Granada (now Moto Hospitality) in 1976. [3] The area was used for heavy industry and included several pylons, gasometers and industrial sheds. [4] The land had been used for landfill waste, leading to concerns about a build up of methane underneath any development. [5] The sale did not go ahead, but in 1986 the Department of Transport announced that bids would be considered for a 40-acre (16 ha) site next to M25 junction 31. [3] Granada announced the following year they intended to build the services, but Esso won the construction contract. [6] Work began in 1988, but was delayed by an objection to the building design from the local planning authority. The services opened in 1990. [1]

The services were popular when opened, and did not attract attention, [4] [7] but gradually deteriorated and were criticised. In 2018, a Transport Focus survey of 9,600 motorway service users ranked Thurrock as the worst service area in England, with only 68% reporting a satisfactory experience. [2] [8] Problems included a lack of working toilet facilities, queues for showers, no air conditioning and food not kept properly refrigerated. [2] [9] Thurrock was found to be the most improved motorway service area in the 2019 edition of the survey. [10]

The services have been used as an exchange point for illegal drug dealing. A representative from HM Customs and Excise said its location next to a major motorway providing access to cross-channel ports and the rest of the UK made it an ideal meeting point for traffickers. [11]

In 1998, 40 kilograms (88 lb) of heroin was recovered from a van trying to breach a police cordon at the premises. [12] In 2001, heroin valued at £8m was seized following an armed police operation. [11] Two years later, a five-man trafficking team was captured on closed-circuit television; they were subsequently arrested and imprisoned for attempting to distribute £2.6m worth of cocaine. [13] In 2010, a sting operation resulted in several arrests for theft, possession of drugs, carrying offensive weapons and driving without tax and insurance and 32 vehicles were impounded. [14] 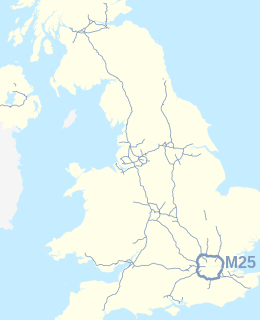 The M25 or London Orbital Motorway is a major road encircling most of Greater London. The 117-mile (188-kilometre) motorway is one of the most important roads in the UK and one of the busiest. Margaret Thatcher opened the final section in 1986, making the M25 the longest ring road in Europe upon opening. The Dartford Crossing completes the orbital route but is not classed as motorway; it is classed as a trunk road and designated as the A282. In some cases, such as the Communications Act 2003, the M25 is used as a de facto reference to Greater London. 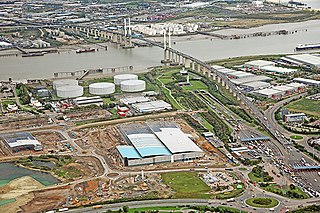 The Dartford-Thurrock River Crossing, commonly known as the Dartford Crossing and until 1991 the Dartford Tunnel, is a major road crossing of the River Thames in England, carrying the A282 road between Dartford in Kent in the south and Thurrock in Essex in the north. It consists of two bored tunnels and the cable-stayed Queen Elizabeth II Bridge. The only fixed road crossing of the Thames east of Greater London, it is the busiest estuarial crossing in the United Kingdom, with an average daily use of over 130,000 vehicles. It opened in stages: the west tunnel in 1963, the east tunnel in 1980 and the bridge in 1991. The crossing, although not officially designated a motorway, is considered part of the M25 motorway's route, using the tunnels northbound and bridge southbound. Described as one of the most important road crossings in Britain, it suffers from heavy traffic and congestion. 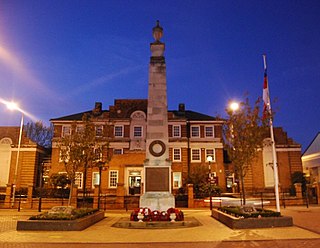 Moto Hospitality, branded as Moto, is a British service station operator which operates 59 motorway service stations across the United Kingdom. It is currently the UK's largest service area operator.

Stafford services is a pair of motorway service stations on the M6 motorway near Stone, Staffordshire, England. In August 2011 it was rated as 4 stars and 3 stars by quality assessors at Visit England. 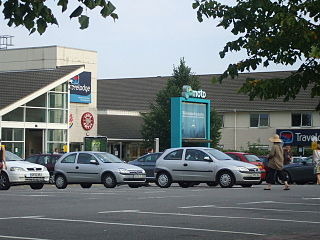 Heston services is a motorway service station on the M4 motorway in the London Borough of Hounslow, built on land that once formed part of the now defunct Heston Aerodrome. 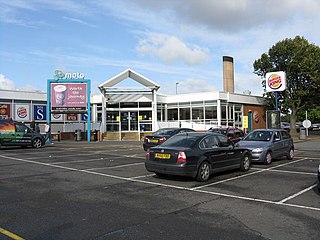 Frankley services is a motorway service station on the M5 motorway between Junctions 3 and 4, near Birmingham, and taking its name from the nearby village of Frankley. 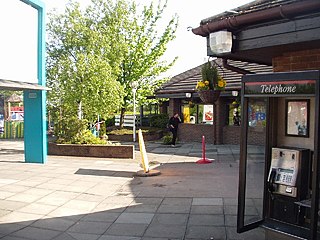 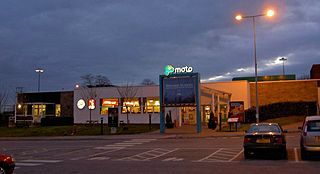 Severn View services, formerly Aust Services is a motorway service station on the M48 motorway near the village of Aust, northwest of Bristol. It is owned by Moto. 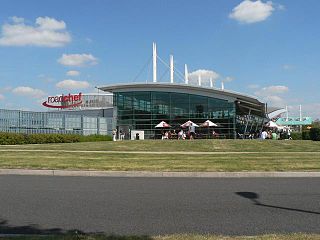 Motorway service areas in the United Kingdom and Ireland, also known as services or service stations, are rest areas where drivers can leave a motorway to refuel/recharge, rest, eat and drink, shop or stay in an on-site overnight hotel. The vast majority of motorway services in the UK are owned by one of three companies: Moto, Welcome Break and Roadchef. Smaller operators include Extra, Westmorland and EuroGarages.

Organized crime in Nigeria includes activities by fraudsters, bandits in Northern Nigeria, drug traffickers and racketeers, which have spread across Western Africa. Nigerian criminal gangs rose to prominence in the 1980s, owing much to the globalization of the world's economies and the high level of lawlessness and corruption in the country. 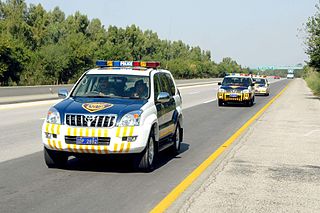 Crime in Pakistan is present in various forms and occurs everywhere, especially in the many major cities such as Karachi, Lahore, Faisalabad, Rawalpindi, Gujranwala, Peshawar, Multan, Hyderabad, Islamabad and Quetta. Among other general crimes, it includes major crimes such as murder, rape, gang rape, sexual abuse of a minor, kidnapping, armed robbery, burglary and carjacking. For example, in the city of Lahore 379 murders, 500 attempted murders, 2,650 abductions and 55 rapes have occurred in 2019.

Wetherby Services is a motorway service area north of Wetherby on the A1(M) motorway in northern England. It opened in September 2008, and the hotel opened later. The service station is situated at junction 46 of the A1(M), the interchange between the A1(M) and the B1224. The service area is accessed from a roundabout, making it accessible from both sides of the motorway. It lies just inside North Yorkshire in the parish of Kirk Deighton, although the town of Wetherby is on the West Yorkshire side of the boundary. It is operated by Moto Hospitality. 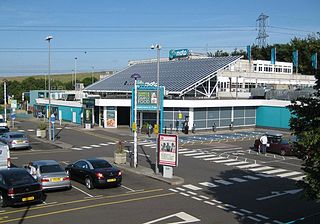 Toddington Services is a motorway service station on the M1 motorway between junctions 11A and 12, just north of Luton and Dunstable in Bedfordshire, England. It takes its name from the nearby village of Toddington. It is owned by Moto Hospitality.

Illegal drugs in Puerto Rico are a problem from a criminal, social, and medical perspective. Located in the Caribbean, Puerto Rico has become a major transshipment point for drugs into the United States. Violent and property crimes have increased due in part to dealers trying to keep their drug business afloat, using guns and violence to protect themselves, their turfs, and drug habits.

Ferrybridge services is a motorway services area (MSA) operated by Moto named after Ferrybridge in West Yorkshire, England. The site has easy access from the M62 motorway and the A1(M) motorway. Originally opened in 1985 under the Granada brand, the MSA at Ferrybridge has been under the Moto brand since 2001.