Tianchisaurus (meaning "heavenly pool lizard"), also invalidly called Tianchiasaurus and "Jurassosaurus", is a genus of ankylosaurian dinosaur from the Middle-Late Jurassic (Bathonian – Oxfordian)-aged Toutunhe Formation of China. If it actually belongs to the family Ankylosauridae as proposed by Dong Zhiming, it would be the second earliest member of that family, being slightly younger than Spicomellus . Unlike other ankylosaurids, it lacked a bony club at the tip of its tail.

The type specimen was informally referred to as "Jurassosaurus" after the 1993 film Jurassic Park , and the species epithet nedegoapeferima is formed from the surnames of the film's main stars: Sam Neill, Laura Dern, Jeff Goldblum, Richard Attenborough, Bob Peck, Martin Ferrero, Ariana Richards, and Joseph Mazzello. [1] Director Steven Spielberg, who has funded Chinese dinosaur research, proposed the name. Dong Zhiming ultimately discarded the genus name "Jurassosaurus" (which is now a nomen nudum ) in favor of Tianchisaurus, but retained the species name honoring the actors. The description paper uses the spellings Tianchiasaurus and Tianchisaurus interchangeably, but is spelled with the extra "a" in the section naming it as a new genus. In 1994, Dong published an erratum stating that Tianchisaurus is the correct name. [3]

Sanghongesaurus, described by Zhao Xijin (1983), [4] is sometimes referred to as a basal ornithischian or a synonym of Tianchisaurus. [5]

Tianchisaurus was likely related to the only other known ankylosaurians alive at the same time during the Middle Jurassic, Sarcolestes and Spicomellus . [6]

Yangchuanosaurus is an extinct genus of metriacanthosaurid theropod dinosaur that lived in China from the Middle to Late Jurassic periods, and was similar in size and appearance to its North American and European relative, Allosaurus. Yangchuanosaurus hails from the Upper Shaximiao Formation and was the largest predator in a landscape that included the sauropods Mamenchisaurus and Omeisaurus and the stegosaurs Chialingosaurus, Tuojiangosaurus and Chungkingosaurus. This theropod was named after the area in which was discovered, Yongchuan, in China.

Sinraptor is a genus of metriacanthosaurid theropod dinosaur from the Late Jurassic. The name Sinraptor comes from the Latin prefix "Sino", meaning Chinese, and "raptor" meaning robber. The specific name dongi honours Dong Zhiming. Despite its name, Sinraptor is not related to dromaeosaurids like Velociraptor. Instead, it was a carnosaur distantly related to Allosaurus. Sinraptor and its close relatives were among the earliest members of the Jurassic carnosaurian radiation. Sinraptor still remains the best-known member of the family Metriacanthosauridae, with some older sources even using the name "Sinraptoridae" for the family.

Xiaosaurus, is a genus of small herbivorous dinosaur from the middle Jurassic, approximately 169 to 163.5 mya. Xiaosaurus lived in what is now the Sichuan Basin of China.

Agilisaurus is a genus of ornithischian dinosaur from the Middle Jurassic Period of what is now eastern Asia. It was about 3.5–4 ft long, 2 ft in height and 40 kg in weight. 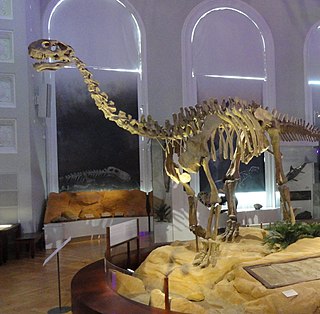 Shunosaurus, meaning "shu lizard", is a genus of sauropod dinosaur from Late Jurassic (Oxfordian) beds in Sichuan Province in China, approximately 159±2 million years ago. The name derives from "Shu", an ancient name for the Sichuan province.

Bellusaurus was a small short-necked sauropod dinosaur from the Middle Jurassic which measured about 4.8 metres (16 ft) long. Its fossils were found in Shishugou Formation rocks in the northeastern Junggar Basin in China.

Chaoyangsaurus is a marginocephalian dinosaur from the Late Jurassic of China. It has been dated to between 150.8 and 145.5 million years ago. Chaoyangsaurus belonged to the Ceratopsia. Chaoyangsaurus, like all ceratopsians, was primarily a herbivore.

Zigongosaurus is a genus of sauropod dinosaur from the Middle Jurassic-Late Jurassic-age Shaximiao Formation of Zigong, Sichuan, China. Because of incomplete knowledge of Jurassic Chinese sauropods, it has been hard to interpret, with some sources assigning it to Omeisaurus, some to Mamenchisaurus, and some to its own genus. 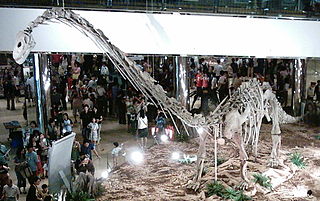 Omeisaurus is a genus of sauropod dinosaur from the Middle Jurassic Period of what is now China. Its name comes from Mount Emei, where it was discovered in the lower Shaximiao Formation of Sichuan Province. 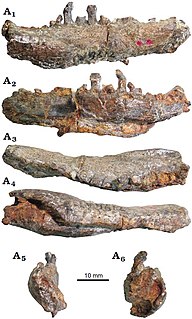 Bienosaurus is a genus of thyreophoran dinosaur from the Lower Jurassic Lower Lufeng Formation in Yunnan Province in China. 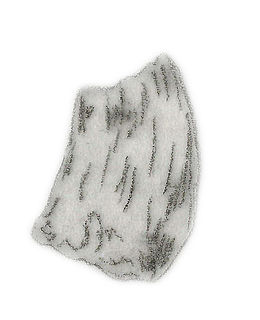 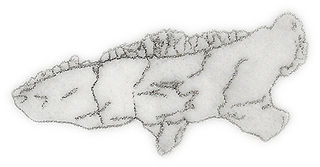 Tatisaurus is a genus of ornithischian dinosaur from the Early Jurassic from the Lower Lufeng Formation in Yunnan Province in China. Little is known as the remains are fragmentary. The type species is T. oehleri.

Monkonosaurus is a dubious genus of herbivorous stegosaurian dinosaur from the Late Jurassic/Early Cretaceous-aged Loe-ein Formation of Tibet. Some sources place it as alive during the Oxfordian - Albian stages, around 163 - 100 million years ago, although Monkonosaurus was probably only alive during the Late Jurassic, making it among the earliest known stegosaurs along with Chungkingosaurus and Bashanosaurus.

Gongbusaurus is a genus of ornithischian, perhaps ornithopod, dinosaur that lived between about 160 and 157 million years ago, in the Late Jurassic period. A small herbivore, it is very poorly known. Two species have been assigned to it, but as the original name is based on teeth, there is no concrete evidence to connect the two species. Its fossils have been found in China.

Nanyangosaurus is a genus of herbivorous ornithischian dinosaur belonging to Hadrosauroidea that lived in the Late Cretaceous of present-day Henan Province, China.

Dong Zhiming is a Chinese vertebrate paleontologist formerly employed at the Institute of Vertebrate Paleontology and Paleoanthropology (IVPP) in Beijing. He began working at the IVPP in 1962, studying under Yang Zhongjian, who was director at the time. He has described fossil remains of many dinosaurs. He investigated and described the Shaximiao Formation; an important contribution to science since they are composed of Middle Jurassic beds which do not commonly yield fossils.

Polacanthinae is a subfamily of ankylosaurs, most often nodosaurids, from the Late Jurassic through Early Cretaceous of Europe and potentially North America and Asia. The group is defined as the largest clade closer to Polacanthus foxii than Nodosaurus textilis or Ankylosaurus magniventris, as long as that group nests within either Nodosauridae or Ankylosauridae. If Polacanthus, and by extent Polacanthinae, falls outside either family-level clade, then the -inae suffix would be inappropriate, and the proper name for the group would be the informally defined Polacanthidae.

Hsisosuchus is an extinct genus of crocodyliform from China. Currently there are three species within this genus: H. dashanpuensis is from the Middle Jurassic, while H. chungkingensis and H. chowi are from the Late Jurassic. It is likely to have been a medium-sized predator.

Spicomellus is an extinct genus of herbivorous ankylosaurian dinosaur that lived in the supercontinent Gondwana during the Middle Jurassic Period. The type and only known species is Spicomellus afer, named and described in 2021. Its remains were found in the third subunit of the El Mers Group (Bathonian-Callovian), near Boulahfa, south of Boulemane, Fès-Meknès, Morocco. The genus name means "spiked collar", from the Latin 'spica' meaning spike, and 'mellum' meaning spiked dog collar and the specific name 'afer' means "the African".