Tiarella, or foamflower, [1] is a genus of wildflower and garden plants found in Asia and North America. They belong to the saxifrage family (Saxifragaceae). Some species are:

Many hybrids are known and cultivated. The following have been given the Royal Horticultural Society's Award of Garden Merit: 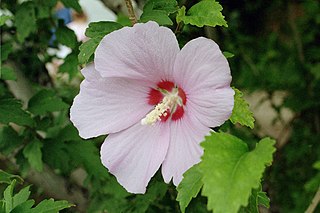 Hibiscus syriacus is a species of flowering plant in the mallow family, Malvaceae. It is native to south-central and southeast China, but widely introduced elsewhere, including much of Asia. It was given the epithet syriacus because it had been collected from gardens in Syria. Common names include the Korean rose, rose of Sharon, Syrian ketmia, shrub althea, rose mallow. It is the national flower of South Korea and is mentioned in the South Korean national anthem.

Echium vulgare — known as viper's bugloss and blueweed — is a species of flowering plant in the borage family Boraginaceae. It is native to most of Europe and western and central Asia, and it occurs as an introduced species in north-eastern North America. The plant root was used in ancient times as a treatment for snake or viper bites. If eaten, the plant is toxic to horses and cattle through the accumulation of pyrrolizidine alkaloids in the liver.

Hosta is a genus of plants commonly known as hostas, plantain lilies and occasionally by the Japanese name gibōshi. Hostas are widely cultivated as shade-tolerant foliage plants. The genus is currently placed in the family Asparagaceae, subfamily Agavoideae, and is native to northeast Asia. Like many "lilioid monocots", the genus was once classified in the Liliaceae. The genus was named by Austrian botanist Leopold Trattinnick in 1812, in honor of the Austrian botanist Nicholas Thomas Host. In 1817, the generic name Funkia was used by German botanist Kurt Sprengel in honor of Heinrich Funk, a collector of ferns and alpines; this was later used as a common name and can be found in some older literature. 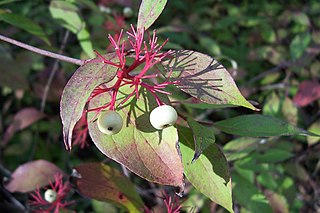 Cornus sericea, syn. C. stolonifera, Swida sericea, red osier or red-osier dogwood, is a species of flowering plant in the family Cornaceae, native throughout northern and western North America from Alaska east to Newfoundland, south to Durango and Nuevo León in the west, and Illinois and Virginia in the east. It has sometimes been considered a synonym of the Asian species Cornus alba. Other names include red brush, red willow, redstem dogwood, redtwig dogwood, red-rood, American dogwood, creek dogwood, and western dogwood.

Maianthemum racemosum is a species of flowering plant native to North America. It is a common, widespread plant known from every US state except Hawaii, and from every Canadian province and territory except Nunavut, as well as from Mexico.

Baptisia australis, commonly known as blue wild indigo or blue false indigo, is a flowering plant in the family Fabaceae (legumes). It is native to much of central and eastern North America and is particularly common in the Midwest, but it has also been introduced well beyond its natural range. Naturally it can be found growing wild at the borders of woods, along streams or in open meadows. It often has difficulty seeding itself in its native areas due to parasitic weevils that enter the seed pods, making the number of viable seeds very low. The plant has low toxicity levels for humans. 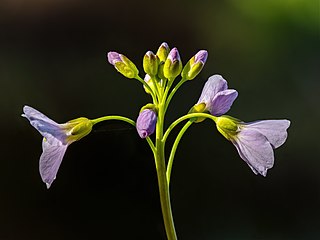 Cardamine pratensis, the cuckoo flower, lady's smock, mayflower, or milkmaids, is a flowering plant in the family Brassicaceae, native throughout most of Europe and Western Asia. The specific name pratensis is Latin for "meadow". 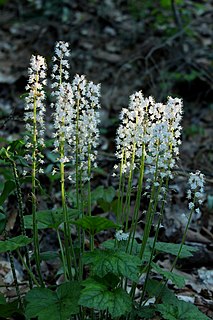 Tiarella cordifolia, the heartleaf foamflower, heartleaved foamflower, Allegheny foamflower, false miterwort, or coolwort, is a species of flowering plant in the saxifrage family, native to North America. It is a herbaceous perennial which is valued in cultivation for its erect stems of foamy cream flowers in summer.

Salix reticulata, the net-leaved willow, or snow willow, is a dwarf willow, native to the colder parts of Europe, North America, and Northern Asia. It is found in the western United States, including the Sierra Nevada and Rocky Mountains. In Europe it extends south through the Carpathian Mountains and Alps to the Pyrenees and the mountains of Bulgaria and North Macedonia. It is common in Canada, Greenland and Finland, and present but rare in Scotland. 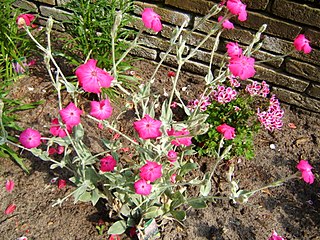 Silene coronaria, the rose campion, is a species of flowering plant in the family Caryophyllaceae, native to Asia and Europe. Other common names include dusty miller, mullein-pink and bloody William. In the United Kingdom it is still widely referenced under its synonym Lychnis coronaria.

Sidalcea is a genus of the botanical family Malvaceae. It contains several species of flowering plants known generally as checkerblooms or checkermallows, or prairie mallows in the United Kingdom. They can be annuals or perennials, some rhizomatous. They are native to West and Central North America. 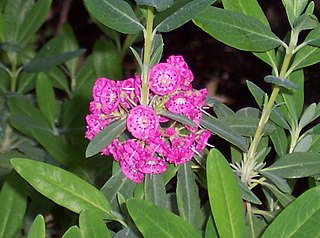 Kalmia angustifolia is a flowering shrub in the family Ericaceae, commonly known as sheep laurel. It is distributed in eastern North America from Ontario and Quebec south to Virginia. It grows commonly in dry habitats in the boreal forest, and may become dominant over large areas after fire or logging. Like many plant species of infertile habitats it has evergreen leaves and mycorrhizal associations with fungi. It is also found in drier area of peat bogs.

Gillenia trifoliata, common name Bowman's root or Indian physic, is a species of flowering plant in the family Rosaceae, native to eastern North America from Ontario to Georgia. It is an erect herbaceous perennial growing to 100 cm (39 in) tall by 60 cm (24 in) wide, with 3-palmate leaves and pale pink flowers with narrow petals and reddish calyces above red coloured stems in spring and summer.

Maurandya barclayana, commonly called angels trumpet or Mexican viper, is an ornamental plant in the family Plantaginaceae native to Mexico. Growing to 4 m (13 ft) in height, this herbaceous perennial climber has ivy-like leaves and white,pink or purple tubular flowers. As it does not tolerate being frozen, in temperate climates it is often grown under glass in a conservatory, or alternatively as a tender annual. It requires a sheltered position in full sun. It has gained the Royal Horticultural Society's Award of Garden Merit.

Nuttallanthus canadensis, the blue toadflax, Canada toadflax, or old-field toadflax, is a species of Nuttallanthus in the family Plantaginaceae, native to eastern North America from Ontario east to Nova Scotia and south to Texas and Florida. 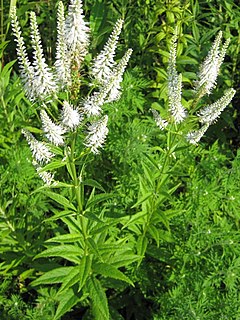 Veronicastrum virginicum, or Culver's root, is a species of flowering plant in the plantain family, native to the eastern United States and south-eastern Canada. Growing to 200 cm (79 in) tall by 45 cm (18 in) broad, it is an erect herbaceous perennial with slender racemes of white or occasionally pink or purple flowers in summer.

Aurinia saxatilis is an ornamental plant native to Asia and Europe.

Achillea filipendulina, the yarrow, fernleaf yarrow, milfoil, or nosebleed, is an Asian species of flowering plant in the sunflower family, native to central and southwestern Asia. It is also naturalized in parts of Europe and North America. 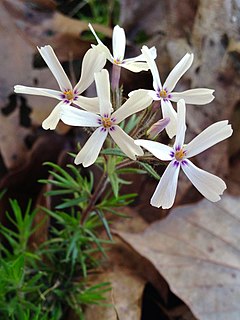 Phlox subulata is a species of flowering plant in the family Polemoniaceae, native to eastern and central USA, and widely cultivated. Growing to about 13 cm (5 in) high at most and covering a 50 cm (20 in) wide area, it is an evergreen perennial forming mats or cushions of hairy, linear leaves. The small, five-petaled flowers bloom in rose, mauve, blue, white, or pink in late spring to early summer. 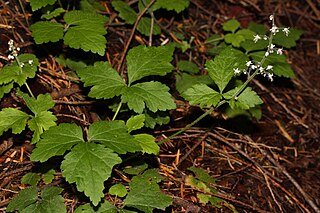 Tiarella trifoliata, commonly called threeleaf foamflower, laceflower, or sugar-scoop, is a dicot in the family Saxifragaceae.