The Tooele County Courthouse and City Hall, located at 39 E. Vine St. in Tooele, Utah, was built in 1867. It includes Greek Revival-inspired architecture. [2] It was listed on the National Register of Historic Places in 1983. [1]

It is significant as the earliest (as known in 1983) and only surviving "temple-form" city hall in the state of Utah. According to its NRHP nomination, the "temple-form, which typically has its short end to the street and a pedimented gable facade in imitation of monumental classical buildings, originated in the Greek Revival period of American building, and was the first and most common building type used in Utah's early public buildings." [2] :3 The builting served as courthouse and city hall from 1867 to 1899 and continued as city hall until 1944. [2]

The museum is located adjacent to the Tooele Pioneer Museum, operated by the Sons of Utah Pioneers, which also displays pioneer and Native American artifacts. [3]

The combined buildings are known as Pioneer Plaza. 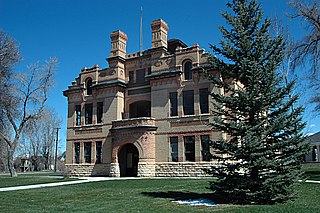 Spring City is a city in Sanpete County, Utah, United States. The population was 988 at the 2010 census.

Temple Square is a 10-acre (4.0 ha) complex, owned by The Church of Jesus Christ of Latter-day Saints, in the center of Salt Lake City, Utah. The usage of the name has gradually changed to include several other church facilities that are immediately adjacent to Temple Square. Contained within Temple Square are the Salt Lake Temple, Salt Lake Tabernacle, Salt Lake Assembly Hall, the Seagull Monument, and two visitors' centers. The square was designated a National Historic Landmark District in 1964, recognizing the Mormon achievement in the settlement of Utah.

The Zion Lodge Historic District surrounds the rustic lodge originally designed by Gilbert Stanley Underwood in Zion National Park. The lodge served as the center of a group of cabins, employee dormitories and support buildings which are included in the district. A swimming pool and bathhouse were demolished in 1976. The district was expanded in 1986 to include an Underwood-designed former photography studio and additional cabins.

The Beaver County Courthouse is a historic building in Beaver, Utah, United States, that is listed on the National Register of Historic Places (NRHP). 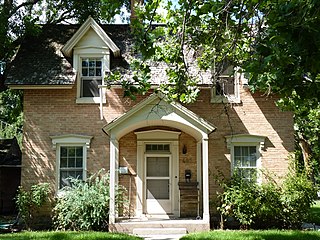 The Johnson–Hansen House is a historic house located in Provo, Utah, United States, that is listed on the National Register of Historic Places.

The Parowan Meetinghouse, sometimes referred to as the Parowan Tabernacle or the Parowan Old Rock Church is a historic meetinghouse of The Church of Jesus Christ of Latter-day Saints in Parowan, Utah, United States, that is listed on the National Register of Historic Places (NRHP). 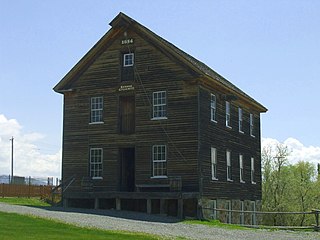 Benson Grist Mill is a restoration-replica museum located in Tooele County, Utah in the western United States, which allows visitors to see the inner workings of a latter-nineteenth-century pioneer gristmill. It has four other historic (nineteenth-century) buildings which have been moved onto the site, as well as four ancillary structures, including an open-air pavilion. It covers 6.98 acres along State Highway 138, 0.8 mile southwest of the intersection of the Road with State Highway 36. The museum is owned and operated by a division of Tooele County. 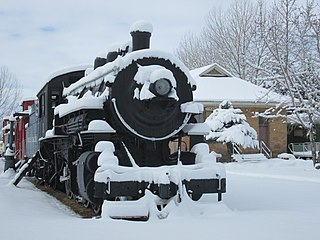 The Tooele Valley Railroad Complex, 35 N. Broadway in Tooele, Utah, dates from 1909. It was listed on the National Register of Historic Places in 1984.

The Tooele Carnegie Library, located at 47 E. Vine St. in Tooele, Utah, was built in 1911 and includes Classical Revival architecture. It was listed on the National Register of Historic Places in 1984. 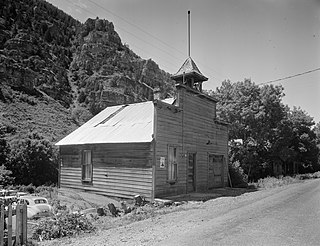 The Ophir Town Hall, located at 57 East Main Street in Ophir, Utah, United States, was built in c.1870. It was listed on the National Register of Historic Places in 1983. 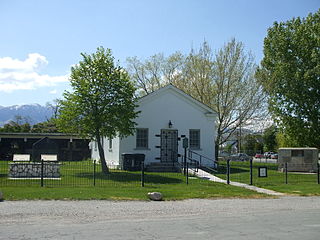 The Grantsville School and Meetinghouse, located at 90 N. Cooley Ln. in Grantsville, Utah, United States, dates from 1861. It has also been known as the Grantsville City Hall and the Old Adobe Schoolhouse, and it is now the Donner-Reed Museum. It was listed on the National Register of Historic Places in 1995.

The Dietrich Cabin is a log cabin located in Ottawa City Park in Ottawa, Kansas. Jacob Dietrich, a German immigrant, built the cabin in 1859. The cabin replaced the family's original home, which was built in 1857, and burned down the following year. After Dietrich died in 1863, his wife Catherine maintained the cabin while raising their three sons. The cabin later became a farmhouse, and several rooms were added to it. In 1961, the cabin was restored to its original condition. It is now a pioneer museum operated by the Franklin County Historical Society, and is open to the public on Sunday afternoons in the summer.

The Miles Goodyear Cabin is a historic building in Ogden, Utah, built by trapper and trader Miles Goodyear on the Weber River in 1845, and is the first permanent European settlement in Weber County, Utah. It is the oldest building in the state of Utah not built by Native Americans. The cabin is constructed of sawn cottonwood logs, measuring roughly 14.33 feet (4.37 m) by 17.75 feet (5.41 m). 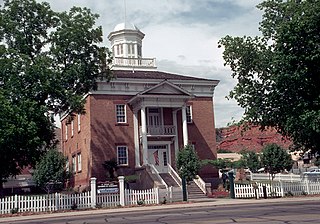 The Old Washington County Courthouse was the courthouse for Washington County, Utah from its completion in 1876 to 1960. Located in St. George, Utah, the courthouse is a two-story red brick structure with unusually thick walls. The 36.33-foot (11.07 m) by 40.33-foot (12.29 m) structure rests on a high basalt rock foundation that comprises the ground floor, and is capped by a pyramidal hipped roof with a prominent wood cupola.

Brown County Courthouse Historic District is a historic courthouse and national historic district located at Nashville, Brown County, Indiana. It encompasses three contributing buildings: the courthouse, Old Log Jail, and the Historical Society Museum Building. The Brown County Courthouse was built in 1873–1874, and is a two-story, Greek Revival style brick building. It has a gable roof and two-tiered, flat-roofed frame tower. The Old Log Jail was built in 1879, and is a small two-story log building. It measures 12 feet by 20 feet, and was used as a jail until 1922. The Historical Society Museum Building, or Brown County Community Building, is a two-story, rectangular log building. It was moved to its present location in 1936–1937. The Works Progress Administration funded the reconstruction and remodeling of the building.

The Madison County Courthouse is a historic courthouse in Richmond, Kentucky, United States, which serves as the seat of government for Madison County. It is a Greek Revival structure originally built in 1849-1850 by John McMurtry according to the designs of Thomas Lewinski, the two of whom were some of the most prominent architects in central Kentucky during the nineteenth century. It has been expanded and remodeled several times since, most recently in 1965. The building was listed on the National Register of Historic Places in 1975.