Top 100 Brasil, previously Brasil Hot 100 Airplay, is the music singles charts in Brazil, compiled by Crowley Broadcast Analysis. In the beginning, the chart was published monthly by Billboard Brasil since the release of the magazine, in October 2009. Since April 2014, the Brazilian Billboard began publishing on its Brazilian site, the weekly Hot 100, as it is, and has always been held at the site, and Billboard magazine in other countries as well as the American Billboard. [1]

It is the top 100 songs, both national and international titles, the most varied genres, computed based on the total number of executions in the period indicated and the grid base stations Crowley, that monitors 256 radio stations located in the grid-base stations, [2] made from Monday to Friday from 7 am to 7 pm. This grid includes the cities of São Paulo, Rio de Janeiro, Brasília, Campinas, Ribeirão Preto, Belo Horizonte, Curitiba, Porto Alegre, Recife, Salvador, Florianópolis, Fortaleza, Goiânia, Campo Grande, Cuiabá and the Triângulo Mineiro, Vale do Paraíba and Paulista Littoral mesoregions.

In 2018, the company launched the Crowley Charts website, which compiles charts that were released weekly by Billboard Brasil. The site features the Top 100 Brasil, with the top 100 performing songs of the week, and charts with the 10 songs most played by genre (National Pop, International Pop, National Pop/Rock, Pagode, Sertanejo, Forró, Funk/Black Music and Gospel). [3] In January 2019, Billboard Brasil shut down operations and Crowley Charts subsequently became the only website to release the weekly chart. [4]

The first number one song of the chart was "Halo" by Beyoncé. "I Want to Know What Love Is" by Mariah Carey is the longest running number 1 (27 weeks), followed by Beyoncé's "Halo" (the most played song in the country in 2009). 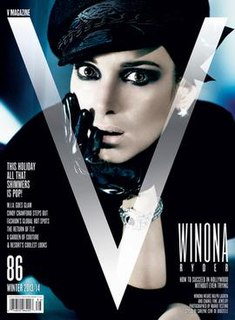 V is an American fashion magazine published since 1999. The magazine is printed seasonally and highlights trends in fashion, film, music and art. A men's fashion quarterly entitled VMAN started as an offshoot in 2003.

Dave Audé is an American DJ, producer and remixer. He operates his own label Audacious Records, and is known for having more number ones than any other producer on the Billboard Dance Club Songs chart. He has done production for artists such as U2, will.i.am, t.A.T.u., Katy Perry, Lady Gaga, Barenaked Ladies, Faith No More, Rihanna, Yoko Ono, Alexis Jordan, Madonna, CeCe Peniston, Jennifer Lopez, Celine Dion, LeAnn Rimes, Selena Gomez, Olivia Holt, Laura Pausini and Beyoncé. As an artist, Audé has scored 14 hit singles so far on the Billboard charts, and an unprecedented 132 #1 remixes on the Billboard Dance Club Songs chart. In 2016, Audé won a Grammy Award in the Best Remixed Recording, Non-Classical category for his remix of "Uptown Funk" by Mark Ronson and Bruno Mars. Dave Audé's songs are represented by Downtown Music Publishing. Audé is managed by record executive, producer, songwriter and publisher Martin Kierszenbaum.

The 20th annual World Music Awards was held on 9 November 2008 in Monaco. Awards are given based on worldwide sales figures for that year. The ceremony was hosted by actor Jesse Metcalfe and singer Michelle Williams.

Billboard Brasil was a monthly Brazilian magazine launched on October 10, 2009, with a print-run of over 40,000 copies. It is distributed nationwide by Brazil's biggest distributor Dinap. The Billboard charts printed in the magazine and on its website are accepted as Brazil's official charts.

The 2011 MTV Video Music Awards took place on August 28, at Nokia Theatre in Los Angeles, honoring the best music videos from the previous year. On July 20, the nominees were announced. Katy Perry received the most nominations this year at ten, followed by Adele, and Kanye West, who were both tied at seven. A Britney Spears tribute was held, consisting of adult and children dancers alike, they wore costumes based on the music videos of Spears. British television director Hamish Hamilton directed the show for television viewing.

This is a list of artists with the most number-ones on the U.S. Billboard Dance Club Songs chart. Madonna currently holds the record for the most number-one songs in the 43-year history of the chart, with 50, which is the record for any Billboard chart. The only other artists to have achieved more than 20 chart toppers are Rihanna (33) and Beyoncé (22). Janet Jackson has accumulated 20 number-ones during her career, followed by Katy Perry with 19, and Jennifer Lopez with 18. Mariah Carey and Kristine W are tied with 17. Donna Summer has 16, Lady Gaga has 15, while Dave Audé, Enrique Iglesias, Pitbull, Kylie Minogue, David Guetta, and Whitney Houston have attained 14 apiece. Two acts have attained thirteen number-one songs: Deborah Cox and Yoko Ono.

The 2016 MTV Video Music Awards were held on August 28, 2016 at Madison Square Garden in Manhattan. Adele's "Hello" was the most nominated video with seven categories. This marked the 33rd edition of the live broadcast. Beyoncé led the nominations with a total of eleven, followed by Adele, who had eight. Rihanna received the Michael Jackson Video Vanguard Award after performing several medley numbers during the ceremony. Britney Spears marked her first performance at the awards show since the heavily criticized 2007 show nine years prior. Beyoncé won eight awards to bring her career total of wins to 26 VMAs, overtaking Madonna's previous record of 20 awards, making her the artist with the most wins in the history of the award show. 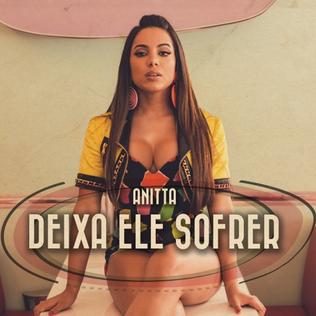 "Deixa Ele Sofrer" is a song by Brazilian pop singer Anitta, released as the first single from her third studio album Bang! (2015). It was officially launched on the radio and digital vehicles on July 16, 2015.