Full trisomy 9 is a lethal chromosomal disorder caused by having three copies (trisomy) of chromosome number 9. It can be a viable condition if trisomy affects only part of the cells of the body (mosaicism) or in cases of partial trisomy (trisomy 9p) in which cells have a normal set of two entire chromosomes 9 plus part of a third copy, usually of the short arm of the chromosome (arm p).

Trisomy 9p is one of the most frequent autosomal anomalies compatible with long survival rate. A study of five cases showed an association with Coffin–Siris syndrome, as well as a wide gap between the first and second toes in all five, while three had brain malformations including dilated ventricles with hypogenesis of the corpus callosum and Dandy-Walker malformation. [2]

Trisomy 9 can be detected prenatally with chorionic villus sampling and cordocentesis, and can be suggested by obstetric ultrasonography.[ citation needed ]

Because trisomy 9 may appear with mosaicism, it is suggested that doctors take samples from multiple tissues when karyotyping for diagnosis. [3]

Chromosome 15q duplication is an extremely rare genetic disorder in which there is an excess copy of the long ("q") arm of human chromosome 15.

Edwards' syndrome, also known as trisomy 18, is a genetic disorder caused by the presence of a third copy of all or part of chromosome 18. Many parts of the body are affected. Babies are often born small and have heart defects. Other features include a small head, small jaw, clenched fists with overlapping fingers, and severe intellectual disability.

Miller–Dieker syndrome, Miller–Dieker lissencephaly syndrome (MDLS), and chromosome 17p13.3 deletion syndrome is a micro deletion syndrome characterized by congenital malformations. Congenital malformations are physical defects detectable in an infant at birth which can involve many different parts of the body including the brain, hearts, lungs, liver, bones, or intestinal tract. MDS is a contiguous gene syndrome – a disorder due to the deletion of multiple gene loci adjacent to one another. The disorder arises from the deletion of part of the small arm of chromosome 17p, leading to partial monosomy. There may be unbalanced translocations, or the presence of a ring chromosome 17. 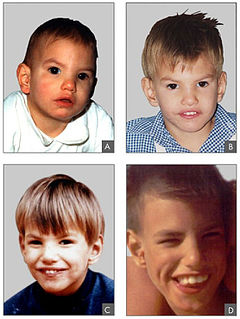 Cri du chat syndrome is a rare genetic disorder due to a partial chromosome deletion on chromosome 5. Its name is a French term referring to the characteristic cat-like cry of affected children. It was first described by Jérôme Lejeune in 1963. The condition affects an estimated 1 in 50,000 live births across all ethnicities and is more common in females by a 4:3 ratio.

A small supernumerary marker chromosome (sSMC) is an abnormal extra chromosome. It contains copies of parts of one or more normal chromosomes and like normal chromosomes is located in the cell's nucleus, is replicated and distributed into each daughter cell during cell division, and typically has genes which may be expressed. However, it may also be active in causing birth defects and neoplasms. The sSMC's small size makes it virtually undetectable using classical cytogenetic methods: the far larger DNA and gene content of the cell's normal chromosomes obscures those of the sSMC. Newer molecular techniques such as fluorescence in situ hybridization, next generation sequencing, comparative genomic hybridization, and highly specialized cytogenetic G banding analyses are required to study it. Using these methods, the DNA sequences and genes in sSMCs are identified and help define as well as explain any effect(s) it may have on individuals.

Trisomy 8 causes Warkany syndrome 2, a human chromosomal disorder caused by having three copies (trisomy) of chromosome 8. It can appear with or without mosaicism.

Monosomy 9p is a rare chromosomal disorder in which some DNA is missing or has been deleted on the short arm region, “p”, of one of the 9th Chromosomes (9p22.2-p23). This deletion either happens de novo or a result of a parent having the chromosome abnormality. This rare chromosome abnormality is often diagnosed after birth when development delay, irregular facial features, and structural irregularities within the heart, and genital defects are noticed. Treatments for this syndrome usually focus on fixing the common malformations associated with this syndrome. Chromosome 9p deletion syndrome was first discovered in 1973 when 3 infants with similar clinical features were observed to have a partial deletion of the short arm of Chromosome 9. Symptoms include microgenitalia, intellectual disability with microcephaly and dysmorphic features.

The Pallister–Killian syndrome (PKS), also termed tetrasomy 12p mosaicism or the Pallister mosaic aneuploidy syndrome, is an extremely rare and severe genetic disorder. PKS is due to the presence of an extra and abnormal chromosome termed a small supernumerary marker chromosome (sSMC). sSMCs contain copies of genetic material from parts of virtually any other chromosome and, depending on the genetic material they carry, can cause various genetic disorders and neoplasms. The sSMC in PKS consists of multiple copies of the short arm of chromosome 12. Consequently, the multiple copies of the genetic material in the sSMC plus the two copies of this genetic material in the two normal chromosome 12's are overexpressed and thereby cause the syndrome. Due to a form of genetic mosaicism, however, individuals with PKS differ in the tissue distributions of their sSMC and therefore show different syndrome-related birth defects and disease severities. For example, individuals with the sSMC in their heart tissue are likely to have cardiac structural abnormalities while those without this sSMC localization have a structurally normal heart.

Confined placental mosaicism (CPM) represents a discrepancy between the chromosomal makeup of the cells in the placenta and the cells in the fetus. CPM was first described by Kalousek and Dill in 1983. CPM is diagnosed when some trisomic cells are detected on chorionic villus sampling and only normal cells are found on a subsequent prenatal test, such as amniocentesis or fetal blood sampling. In theory, CPM is when the trisomic cells are found only in the placenta. CPM is detected in approximately 1-2% of ongoing pregnancies that are studied by chorionic villus sampling (CVS) at 10 to 12 weeks of pregnancy. Chorionic villus sampling is a prenatal procedure which involves a placental biopsy. Most commonly when CPM is found it represents a trisomic cell line in the placenta and a normal diploid chromosome complement in the baby. However, the fetus is involved in about 10% of cases.

3C syndrome is a rare condition whose symptoms include heart defects, cerebellar hypoplasia, and cranial dysmorphism. It was first described in the medical literature in 1987 by Ritscher and Schinzel, for whom the disorder is sometimes named.

Cat eye syndrome (CES) or Schmid–Fraccaro syndrome is a rare condition caused by an abnormal extra chromosome, i.e. a small supernumerary marker chromosome. This chromosome consists of the entire short arm and a small section of the long arm of chromosome 22. In consequence, individuals with the cat eye syndrome have three (trisomic) or four (tetrasomic) copies of the genetic material contained in the abnormal chromosome instead of the normal two copies. The prognosis for patients with CES varies depending on the severity of the condition and their associated signs and symptoms, specially when heart or kidney abnormalities are seen.

Trisomy 22 is a chromosomal disorder in which three copies of chromosome 22 are present rather than two. It is a frequent cause of spontaneous abortion during the first trimester of pregnancy. Progression to the second trimester and live birth are rare. This disorder is found in individuals with an extra copy or a variation of chromosome 22 in some or all cells of their bodies.

Trisomy 16 is a chromosomal abnormality in which there are 3 copies of chromosome 16 rather than two. It is the most common trisomy leading to miscarriage and the second most common chromosomal cause of it, closely following X-chromosome monosomy. About 6% of miscarriages have trisomy 16. Those mostly occur between 8 and 15 weeks after the last menstrual period.

Tetrasomy 9p is a rare chromosomal disorder characterized by the presence of two extra copies of the short arm of chromosome 9, in addition to the usual two. Symptoms of tetrasomy 9p vary widely among affected individuals but typically include varying degrees of delayed growth, abnormal facial features and intellectual disability. Symptoms of the disorder are comparable to those of trisomy 9p.

Tetrasomy X, also known as 48,XXXX, is a chromosomal disorder in which a female has four, rather than two, copies of the X chromosome. It is associated with intellectual disability of varying severity, characteristic "coarse" facial features, heart defects, and skeletal anomalies such as increased height, clinodactyly, and radioulnar synostosis. Tetrasomy X is a rare condition, with few medically recognized cases; it is estimated to occur in approximately 1 in 50,000 females.

Pentasomy X, also known as 49,XXXXX, is a chromosomal disorder in which a female has five, rather than two, copies of the X chromosome. Pentasomy X is associated with short stature, intellectual disability, characteristic facial features, heart defects, skeletal anomalies, and pubertal and reproductive abnormalities. The condition is exceptionally rare, with an estimated prevalence between 1 in 85,000 and 1 in 250,000.