Trombipulation is a 1980 album by the funk band Parliament (see 1980 in music). It was released by Casablanca Records. It was the last album of original material produced by the group for 38 years until Medicaid Fraud Dogg in 2018. Unlike previous Parliament albums, George Clinton did not serve as sole producer of the album, as other P-Funk figures assisted in producing individual tracks. Bassist Bootsy Collins emerged as the principal musician on this album, playing virtually all of the instruments on a number of tracks. The track "Let's Play House" was sampled by the Hip-Hop group Digital Underground for their single "The Humpty Dance".

While Trombipulation wasn't as commercially successful as previous Parliament albums, its first single, "Agony of DeFeet" peaked at number 7 on the Billboard Hot R&B/Hip-Hop Songs charts. 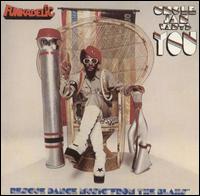 Uncle Jam Wants You is the eleventh studio album by American funk rock band Funkadelic. It was originally released by Warner Bros. Records on September 21, 1979, and was later reissued on CD by Charly Groove Records and Priority Records. It was produced by George Clinton under the alias Dr. Funkenstein. It is the first Funkadelic album since America Eats Its Young in 1972 not to sport a cover illustrated by Funkadelic artist Pedro Bell, though Bell did provide artwork for the album’s back cover and interior. Uncle Jam Wants You was the second Funkadelic album to be certified gold. The album peaked at #18 on the US Billboard 200 and #2 on the US Billboard Top R&B/Hip-Hop Albums charts. 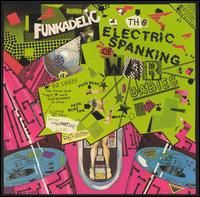 The Electric Spanking of War Babies is the twelfth studio album by the American funk rock band Funkadelic, released in April 1981 on Warner Bros. Records. The title is an allusion to the Vietnam War and baby boomers. Sly Stone contributed to the recording sessions, singing lead vocals on "Funk Gets Stronger ".

Pleasure Principle is the debut album by the female P-Funk spin off group Parlet. The album was released in 1978 by Casablanca Records and was produced by P-Funk leader/producer George Clinton. Parlet consisted of Mallia Franklin, Debbie Wright, and Jeanette Washington. The album features heavy involvement from the P-Funk musical collective.

Invasion of the Booty Snatchers is the second studio album by the P-Funk spin off group Parlet. Released on May 15, 1979, this was the final Parlet album to feature Mallia Franklin and the first to feature Janice Evans. The album was produced by George Clinton and Ron Dunbar. The cover art was created by Ronald "Stozo" Edwards. The album's highest charting single was "Riding High".

Play Me or Trade Me is the third and final studio album by the P-Funk spin off act Parlet. The album was released by Casablanca Records in 1980 and was produced by George Clinton and Ron Dunbar. Like many albums released by the label during this year, it would be totally ignored in terms of promotion due to the label being bought by Polygram Records. The vocal line up for this album remained the same as the previous album. Play Me or Trade Me failed to enter on the Billboard R&B album charts. 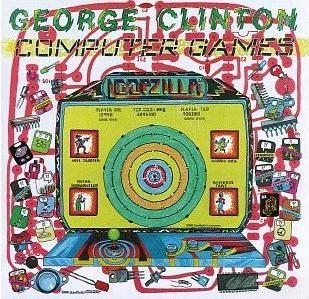 Computer Games is the debut album by American funk musician George Clinton, released by Capitol Records on November 5, 1982. Though technically Clinton's first "solo" album, the record featured most of the same personnel who had appeared on recent albums by Parliament and Funkadelic, both formally disbanded by Clinton in 1981. Conceived in the aftermath of a period marked by financial and personal struggles for Clinton, "Computer Games" restored his popularity for a short time before P-Funk fell victim to renewed legal problems and scant label support in the mid 1980s. 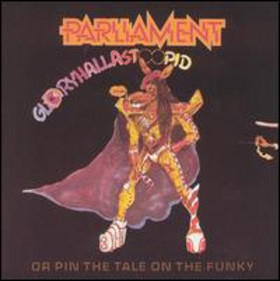 Gloryhallastoopid is a 1979 album by the funk ensemble Parliament. It was their penultimate album on the Casablanca Records label, and is another concept album which tries to explain that Funk was responsible for the creation of the universe. It reuses samples from previous albums, notably the Mothership Connection and Funkentelechy vs. the Placebo Syndrome.

"Aqua Boogie " is a song by funk band Parliament. The track was released from their 1978 album, Motor Booty Affair. The song describes being compelled to learn to swim despite the persistent fear of water and drowning, comparing it to the reluctance to dance. 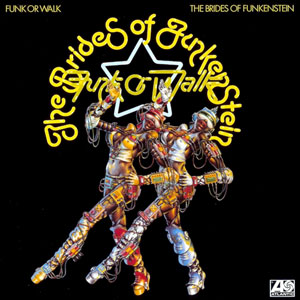 Funk or Walk is the debut album by the Brides of Funkenstein, released on Atlantic Records in September 1978. The album was produced by George Clinton with the exception of the album's first single "Disco To Go" which was written and produced by Clinton and Bootsy Collins. The Brides of Funkenstein consisted of Lynn Mabry and Dawn Silva, who were members of Sly and the Family Stone prior to joining P-Funk. Funk Or Walk earned Mabry and Silva a Record World Award for Best New Female Artists and Best New R&B Group in 1979. The song was originally performed live by Bootsy's Rubber Band. To this day, the P-Funk All Stars continue to play "Disco To Go" in their live concerts. The Brides of Funkenstein also toured and recorded with Parliament/Funkadelic around this same time. 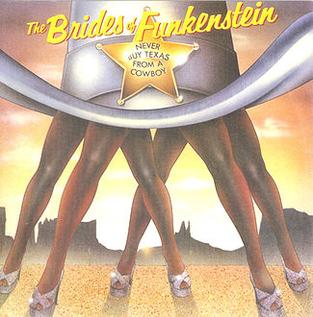 Never Buy Texas from a Cowboy, released on Atlantic Records in November 1979, was the second album from the American female funk band, The Brides of Funkenstein. Morphing into a trio on the second album release, the vocalists consisted of Dawn Silva, Sheila Horne, and Jeanette McGruder. Horne and McGruder served as background vocalists on subsequent P-Funk concert tours.

Urban Dancefloor Guerillas is the debut album of funk band the P-Funk All-Stars, released in 1983 on Uncle Jam Records. The album features an amalgamation of various alumni from the bands Parliament and Funkadelic, both of which were disbanded by 1981. It is the only studio album credited solely to the P-Funk All-Stars, as opposed to other albums that are credited to George Clinton and the P-Funk All Stars. The songs on Urban Dancefloor Guerillas were produced by a variety of members of the P-Funk musical collective including Clinton, Garry Shider, Walter Morrison, Sylvester Stewart, and Bootsy Collins.

Some of My Best Jokes Are Friends is the third studio album by George Clinton. It was released in 1985 by Capitol Records. Though it wasn't as successful as Computer Games, Clinton's first solo album, Some of My Best Jokes Are Friends received favorable reviews among critics. While many former P-Funk musicians are featured on the album, it also features collaborations with more contemporary performers such as Doug Wimbish, Steve Washington, and keyboardist Thomas Dolby. 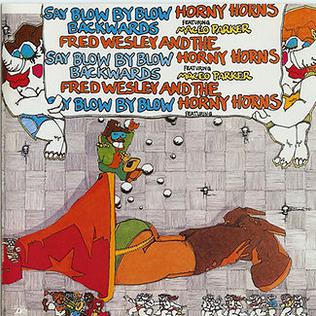 Testing Positive 4 the Funk is the fourth installment of the George Clinton Family Series collection. The album was released in 1993 by P-Vine Records in Japan, and then was released later in the same year by AEM Records in the United States and Sequel Records in the U.K. This collection is noted for the inclusion of tracks such as a re-recording of "Live Up " which was originally recorded by the soul quartet, The Fantastic Four. The track marked the debut of P-Funk vocalist Glenn Goins.

P Is the Funk is the second installment of the George Clinton Family Series collection. The album was released in 1992 by P-Vine Records in Japan, and then was released later in the same year by AEM Records in the United States and Sequel Records in the United Kingdom. The album contains notable tracks such as the first song ever recorded by the Brides of Funkenstein entitled "Love Is Something" featuring P-Funk lead guitarist Eddie Hazel, as well radio commercials for the Ultra Wave album by Bootsy Collins. 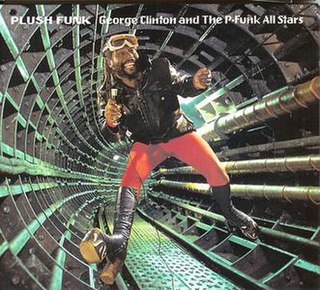 A Fifth of Funk is the fifth and final installment of the George Clinton Family Series collection by Parliament-Funkadelic collective members. The album was released in Japan in 1993 by P-Vine Records, and later in the same year by AEM Records in the United States and Sequel Records in the United Kingdom. The compilation's producer and P-Funk leader George Clinton gives his final thoughts about the tracks on the album, as well as his feelings on the entire Family Series project, for A Fifth of Funk's final track. The title is a play on words of Beethoven's Symphony No. 5, as well as Walter Murphy's 1976 disco hit "A Fifth of Beethoven". 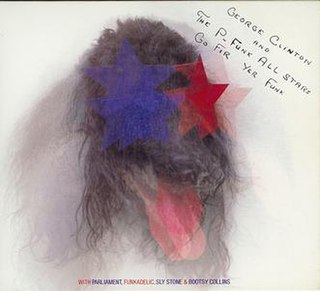 Go Fer Yer Funk is the first installment of the George Clinton Family Series collection. The album was released in 1992 by P-Vine Records in Japan, and then was released the next year by AEM Records in the U.S. and Sequel Records in the U.K.. The Family Series was designed to present previously unreleased recordings done by various bands in the Parliament-Funkadelic musical stable. The first CD is notable in that it features the title cut "Go Fer Yer Funk" which originally featured a collaboration between P-Funk and Funk legend James Brown.